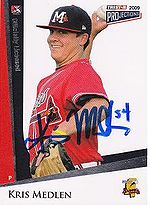 Kris Medlen was signed by the Atlanta Braves and scout Tom Battista as a 10th round pick in the 2006 amateur draft.

Kris pitched his first major league complete game and shutout on August 16, 2012, when he defeated the San Diego Padres, 6-0, benefiting from two homers by Chipper Jones. The win marked his 15th consecutive start in which the Braves had emerged on top, dating back to May 29, 2010, matching a franchise record set by John Smoltz during his Cy Young Award-winning season in 1996. Obviously, Medlen had not been a regular member of the starting rotation during the entire period, as he had missed a calendar year because of Tommy John surgery and his only two major league pitching appearances of 2011 had come in relief. He was only making his 4th start of the year, having moved from the bullpen on July 31st. He went on to win National League Pitcher of the Month honors for August, after going 4-0, 0.50 in 5 starts. He also recorded a streak of 28 1/3 scoreless innings during the period. He ran his winning streak to 21 starts, and his unbeaten streak to 26, with a 3-0 win over the Miami Marlins on September 19th, improving his record to 9-1. It was the longest streak of winning starts since the New York Yankees had come out with the upper hand during 22 of Whitey Ford's starts from 1950 to 1953, a streak interrupted by Ford's military service at the time of the Korean War. Medlen tied Ford's record on September 24th, when Freddie Freeman hit a two-run walk-off home run against Mike Dunn of the Miami Marlins to turn a potential 4-3 loss into a 5-4 win, incidentally clinching a postseason slot for the Braves. The record of 22 winning starts had only been accomplished by one other pitcher besides Ford and Medlen, Hall of Famer Carl Hubbell with the New York Giants in 1936 and 1937. When he won his start on September 30th, 6-2 over the New York Mets, he became the sole holder of the record. He was named the NL's Pitcher of the Month again in September, having gone 4-0 with 46 strikeouts and a 1.26 ERA. His fairy-tale season ended on a bad note, however, as he started and lost the National League Wild Card Game against the St. Louis Cardinals, although the loss in a postseason game did not affect his streak of winning starts in the regular season.

Medlen was one of the starting pitchers named to Team USA for the 2013 World Baseball Classic in mid-January 2013, but a week later, he asked that his name be removed from the roster as he and his wife were expecting their first child at the time of the tournament. Looked upon as one of the key starters for the Braves in 2013, he did not disappoint, putting up a record of 15-12, 3.11 in 32 games. He pitched 197 innings and struck out 157 batters, while walking only 47. The Braves won the NL East title handily and was given the ball for Game 1 of the NLDS against the Los Angeles Dodgers on October 3rd. Facing Clayton Kershaw, he needed to pitch a great game to get the Braves started on the right foot, but alas he gave up a pair of runs in both the 2nd and 3rd innings, gave up a 5th run in the 4th, then put the first two men on in the 5th before giving way to Luis Ayala. The Braves could not dig out of that early hole and he was charged with the 6-1 loss.

On March 9, 2014, Medlen left a spring training start in the 4th inning with what was thought to be an elbow injury. He was first diagnosed with a right forearm strain, putting in jeopardy his designation as the team's opening day starter, then an MRI revealed ligament damage in his elbow. He went to meet Dr. James Andrews who had performed Tommy John surgery on that same elbow in August of 2010, who confirmed the verdict. He thus underwent the surgery for a second time, putting him out for the year. As a result of Medlen's injury, the Braves went out and signed free agent Ervin Santana on March 12th. Another consequence was that the Braves declined to tender him another contract after the season, making him a free agent. On December 18th, he signed a two-year deal with the Kansas City Royals for $8.5 million. He only made his first appearance of the 2015 on June 19th, pitching for the Northwest Arkansas Naturals, for whom he made 3 starts, then made 3 more starts for the Omaha Storm Chasers before making his debut with the Royals on July 20th. he was used in long relief for the first month, in order for him to regain arm strength, and made his first start on August 24th, when he defeated the Baltimore Orioles, 8-3. After a couple of rough outings, he began to do very well in September, encouraging the Royals to move starter Danny Duffy to the bullpen in preparation for the postseason. On September 20th, the two combined their efforts in a 10-3 win over the Detroit Tigers, Kris pitching the first five innings to improve to 5-1 on the year, and Duffy the final four to earn his first career save.