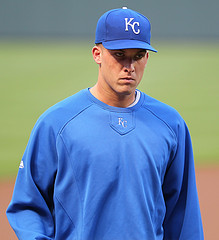 Danny Duffy was drafted by the Kansas City Royals in the 3rd round of the 2007 amateur draft. He was signed by scout Rick Schroeder and made his pro debut that summer.

After losing his first two major league decisions, Duffy earned his first major league win for the Royals on June 14, 2011, beating the Oakland A's on the road, 7-4. He pitched six innings that day, giving up 2 runs on 4 hits. He made 20 starts altogether, with a record of 4-8, 5.64 and 87 strikeouts in 105 1/3 innings. He made the Royals's staff again out of spring training in 2012 and was showing signs of improvement in the early going, posting a record of 2-2, 3.90 after 6 starts with 28 Ks in 27 2/3 innings. However, on May 13th, he was removed from a start against the Chicago White Sox after making only 13 pitches. He underwent an MRI on his elbow the next day, and the results were not good: the test showed a torn ligament, a prelude to season-ending Tommy John surgery performed by Dr. Lewis Yocum on May 18th, the same day as teammate Blake Wood.

Duffy made his return to the majors with a start against the Minnesota Twins on August 7, 2013. He gave up 2 runs in 3 2/3 innings that day and had a no-decision, but in his second start on August 16th, in the first game of a doubleheader against the Detroit Tigers, he was brilliant. Squaring off against Justin Verlander, he did not give up his first hit until the 6th inning, and left after 6, having given up only that one hit and three walks. Three relievers then completed the game with one inning of work each, and he was given credit for the Royals' 2-1 win. He ended up making 5 starts for the Royals, with a record of 2-0, 1.85 in 24 1/3 innings.

He pitched the best game of his career on May 17, 2014, when he took a perfect game into the 7th inning of a start against the Baltimore Orioles. Adam Jones ended the bid with a single with two outs in the 7th, and he was taken out after allowing a lead-off hit to Nelson Cruz in the 8th. He needed to be good, because the Royals' sputtering offense only gave him a single run, which relievers Wade Davis and Greg Holland managed to make stand for a 1-0 win. On September 6, 2014, he had to leave a start against the Mew York Yankees after making only one pitch, a ball to lead-off hitter Jacoby Ellsbury, after experiencing shoulder pain. It was the first time in team history a starter had failed to complete at least one batter, and the first time since Rick Reed on July 22, 1992 that a starter had failed to retire anyone. He ended the year with a 9-12 record but a very good 2.53 ERA in 149 1/3 innings. In the postseason, he was used strictly as a reliever, making three appearances for a total of 4 2/3 innings, including a couple of outings in the 2014 World Series against the San Francisco Giants. Manager Ned Yost explained after the Series that he would have used Duffy as a starter but that he was suffering from a cracked rib, which limited him to short outings only.

Danny was part of the Royals starting rotation for most of 2015, but after making 24 starts during which he went 7-8 with a high 4.35 ERA for the first-place Royals, he was demoted to the bullpen just as the season was winding down. The move was in preparation for how he would be used in the postseason, and in his first relief outing of the year on September 20th, he picked up his first career save when he pitched the final four innings of a 10-3 win over the Detroit Tigers in relief of Kris Medlen. He lowered his ERA to 4.08 by the end of the season with 6 solid appearances out of the bullpen, and in the postseason was used strictly as a reliever. He gave up four runs in 6 innings over 6 outings during the 3 series, but also struck out 9 while walking no one. The Royals won their first World Series title in three decades that year, with Danny pitching three times against the New York Mets to earn a championship ring.

Duffy started the 2016 season in the bullpen, making his first 16 appearances in the role. His first start only came on May 15th, but from that point on he took his regular turn on the mound as a starter, pitching well. On August 1st, he pitched the best game of his career against the Tampa Bay Rays. He held them hitless for 7 innings before Desmond Jennings led off the 8th with a double. It was the only hit he allowed in 8 innings while striking out a team-record 16 batters, bettering the 15 recorded by Zack Greinke on August 25, 2009. He only walked one batter, and Kelvin Herrera then pitched a perfect 9th inning to complete the combined one-hitter, a 3-0 win that improved his record to 7-1 and lowered his ERA to 2.98. On August 11th, he pitched the first complete game of his career in defeating the Chicago White Sox, 2-1, registering his 8th straight win in the process. He finished the year at 12-3, 3.51 with 188 strikeouts in 179 2/3 innings. He was one of the few bright lights in a disappointing season for the defending World Series champions who missed the postseason.

He started the 2017 season as one of the few Royals having a good year, as the team's hitter were particularly inept over the first two months of the year. Danny managed to maintain a 4-4 record with a solid 3.54 ERA during that period, but on May 28th, he suffered a strained oblique when he tripped and fell awkwardly while trying to cover first base in a game against the Cleveland Indians. he was immediately placed on the disabled list and was expected to miss six to eight weeks of action as a result.