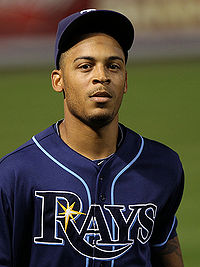 Desmond Jennings opened 2010 in AAA and made his major league debut with the Tampa Bay Rays later that season.

Jennings debuted as a pro with the Princeton Devil Rays, hitting .277/.360/.390 with 32 steals in 37 tries. He scored 48 times in 56 games. He led the Appalachian League in swipes and runs. Baseball America ratedhim as the #7 prospect in the Appalachian League, between Daryl Jones and Chase Fontaine.

The Birmingham native spent 2007 as the center fielder for the Columbus Catfish. He improved his batting line to .315/.401/.465 and stole 45 bases in 60 tries. He was 4th in the South Atlantic League in steals (10 behind Quintin Berry), 5th in OBP and 6th in average. He also fielded .990 and was rated by Baseball America as the best defensive outfielder in the SAL. He led Devil Rays minor leaguers in stolen bases. He made the SAL All-Star outfield alongside John Raynor and Ryan Royster. Baseball America named him the best athlete in the Tampa Bay chain as well as the #1 SAL prospect, just ahead of Hector Gomez, Fautino de los Santos and Lars Anderson.

In 2008, Jennings missed the first two months with a back injury. He played 24 games for the Vero Beach Devil Rays, hitting .259/.360/.412 in 24 games before a left shoulder injury ended his year; he wound up having surgery. In the Arizona Fall League, he played for Peoria.

Jennings returned to health and prospect status in 2009. He produced at a .316/.395/.486 rate for the Montgomery Biscuits with 37 steals in 42 tries over 100 games. Promoted to the Durham Bulls, he improved his batting line to .325/.419/.491 over the final 32 games, with 15 steals in 19 attempts and 23 runs. For the year, he had 92 runs, 10 triples, 31 doubles and 52 stolen bases in 59 attempts. He only made 3 errors for the year. He was named the Rays Minor League Player of the Year, after leading the farm system in average (.318), runs, hits (158), total bases (242), triples, walks (67, tied with Matt Joyce), steals and OBP (.401). He was named the Rays Minor League Player of the Year. He was second in the Southern League in average (behind Ezequiel Carrera), third in stolen bases (5 behind leader Matt Young, 4th in OBP, 5th in slugging and tied for 4th in triples. He joined Carrera, David Cook and Stefan Gartrell as the All-Star outfielders in the SL and took home the league's MVP award. Baseball America rated him the league's best baserunner, fastest baserunner, best defensive outfielder and most exciting player. He was ranked the #3 prospect in the SL behind Jason Heyward and Gordon Beckham and just ahead of Mike Stanton. He finished the year as the sole minor leaguer with 50+ extra-base hits and 50+ steals. In the 2009 Futures Game, Jennings was 0 for 3 with a walk and a run as he stole 3 bases for the USA; he played all game in center field and hit second behind Eric Young Jr.. Desmond had his best game of the season on September 3, going 7 for 7 in a 25-2 win over the Norfolk Tides. It had been 10 years since an International League player, Michael Coleman, had gotten 7 hits in one game. He then helped Durham win the Triple-A National Championship over the Memphis Redbirds. Tampa Bay added him to their 40-man roster in November.

Baseball America rated him as the #6 prospect in baseball entering 2010. Jennings began 2010 back with Durham after a wrist injury sidelined him for most of spring training. He again was chosen for the Futures Game. He would score three runs without a hit in the USA's 9-1 win in the 2010 Futures Game. Starting in left field for the USA and batting leadoff, he was hit by a Simon Castro pitch his first time up. Domonic Brown later singled him in. He lined out against Hector Noesi in the second and struck out against Julio Teheran in the fourth. In the sixth, he drew a walk from Trystan Magnuson, stole second and came in on a hit by Grant Green. In the 8th, Jennings reached on a Hak-ju Lee error and later scored on a Lonnie Chisenhall grounder. Overall, Jennings hit .278/.362/.393 with 82 runs and 37 steals in 41 tries for Durham in 2010, showing a disappointing power drop-off with just 3 homers after 11 the prior year.

A September call-up to The Show, Desmond started in right field and hit second in his MLB debut (B.J. Upton had center). He formed a speedy outfield with Upton and Carl Crawford. In his first at-bat, he grounded out against Shaun Marcum. He later struck out and grounded into a force against Marcum. In the 8th, with a 1-1 tie, he left for pinch-hitter Ben Zobrist.