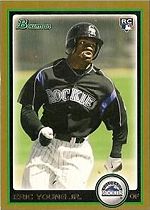 Eric Young Jr. is the son of Eric Young and Eric Sr.'s high school girlfriend; Eric Jr. was born out of wedlock and his parents never married, but Eric Sr. remained active in his life from the time he turned seven. They spent their summers together and Eric Jr. developed a love for baseball.

Eric began to look like a prospect with the 2006 Asheville Tourists, producing at a .295/.391/.409 clip, scoring 92 times and stealing 87 bases in 118 tries. He led the South Atlantic League in steals, tied for third in runs and was sixth in OBP. In fact, he led all of the minor leagues in steals, 18 more than runner-up Darren Ford, but also was caught stealing more than anyone else, 8 times ahead of the runner-ups. He also led SAL second basemen in both putouts (267) and assists (369). Baseball America rated him as being the best baserunner and fastest baserunner in the SAL. He spent the winter in the Hawaii Winter League, hitting .287/.348/.366 for the Waikiki BeachBoys and going 14 for 19 in steals. He was 6th in the HWL in average and tied Ford for second in the league in swipes, six behind leader Nyjer Morgan.

Young hit .291/.359/.430 for the 2007 Modesto Nuts. He stole 73 bases in 91 tries, legged out 11 triples and scored 113 runs. He led Rockies minor leaguers in steals and runs and was one triple behind Anthony Jackson. He led the California League in triples, sacrifice hits (12), steals, times caught stealing and error at second base (25). He made the All-Star team at second, joining Aaron Bates, Chris Nelson and Chris Davis on the infield. Baseball America rated him as the #14 prospect in the Cal League, between Taylor Teagarden and Hainley Statia. They also rated him as the best baserunner, fastest baserunner and most exciting player in the loop. In all of the affiliated minors, he was 4th in runs (all 3 players ahead spent at least part of the year in the high-scoring Cal League, as did Young), tied for 8th in triples and second in steals (2 behind Ovandy Suero).

Eric Young Jr. made his major league debut with the Colorado Rockies in 2009, with the team in a tight race with the Los Angeles Dodgers and San Francisco Giants for the NL West title and the NL wild card. In his first game in the bigs, he led off for Colorado and manned center field, even though he had spent practically his entire career at second base. In his first major league at-bat, he flew out against Clayton Kershaw of the Dodgers. He got his first hit in the 5th inning, also off of Kershaw, but was promptly picked off of first base. He finished the game 1 for 4 and was replaced by Carlos González in center late in the contest. He went 14 for 57 (.246 with a .295 OBP and .316 slugging) in 30 games for the Rockies that first season (only stealing four bases in eight tries), then played in 2 games in the NLDS, going 0 for 1 against the Philadelphia Phillies.

In 2010, Eric played 51 games at Colorado, hitting .244/.312/.285 for a meek 54 OPS+ with 17 steals in 23 attempts while sharing time between second base an the outfield. Injured for part of the year, he played another 37 games in the minors, hitting .250 between Class AA and AAA. He opened the 2011 season back at Colorado Springs, where he hit an excellent .363/.454/.552 in 58 games. He was called up to Colorado in mid-July and got to play almost regularly until the end of the season, getting into 77 games, during which he hit .247/.342/.298 for a 67 OPS+. He scored 34 runs and stole 27 bases while only being caught four times, but displayed almost no power while playing mostly left field. He was 5th in the 2011 NL in steal percentage (87.1%). In 2012, he spent his first full season with the Rockies, although he was mostly a back-up. On August 8th, however, he led off a game against the Dodgers by hitting an inside-the-park homer against Chad Billingsley. But, typical of the Rockies' wretched season, his teammates managed to immediately squander that early advantage and lose the game, 6-4. He played 98 games that season, hitting a solid .316/.377/.448, good for an OPS+ of 110, with 14 steals. However, this solid batting line was compiled in only 174 at-bats.

In 2013­, Young fell victim of a numbers' crunch in the Rockies' outfield, as there was little playing time left with the three starters - Carlos Gonzalez, Dexter Fowler and Michael Cuddyer - all doing well, and Tyler Colvin claiming the role of fourth outfielder. Young was hitting .242 in 57 games - but with 165 at-bats - when the Rockies decided to designate him for assignment on June 12th; a week later on June 18th, he was traded to the New York Mets, in return for P Collin McHugh, taking the place of Collin Cowgill on the roster. He played regularly in left field with the Mets the rest of the way, and while he hit only .251 in 91 games, his 38 stolen bases, added to the 8 he had stolen for Colorado, gave him a National League-leading total of 46 at the end of the year. He was two steals ahead of runner-up Jean Segura. He also tied Matt Carpenter for 7th in triples (7), tied for 8th in sacrifice hits (10), tied Starlin Castro for 6th in double play grounders (21), tied Shin-Soo Choo for 5th in times caught stealing (11), was third in putouts in LF (180, behind Matt Holliday and Domonic Brown) and tied Alfonso Soriano for 4th in assists in left (7). However his batting line of .249/.310/.336 in 148 games, equivalent to an OPS+ of 79, was well below expectations for a corner outfielder, and it was unclear whether he would remain a starter much longer.

Young did hold on to his starting job at the start of 2014, helped in part by the fact namesake Chris Young had to go on the disabled list after playing only one inning on Opening Day. That left him time to play alongside Juan Lagares and Curtis Granderson while Chris Young was out, and on April 10th he had a great game, getting 3 hits and as many stolen bases and scoring 4 runs in leading the Mets to a 6-4 win over the Atlanta Braves.

Young was a coach for the Tacoma Rainiers in 2021.