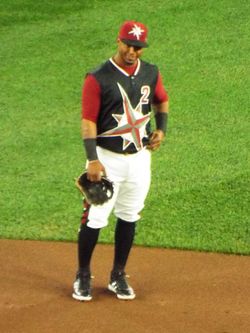 Jean Segura was signed by scout Leo Perez for the Los Angeles Angels of Anaheim in 2007. He made his pro debut for the DSL Angels that summer and came stateside with the AZL Angels in 2008.

The Angels recalled Segura on July 22, 2012 as insurance in case Erick Aybar landed on the disabled list (or, as some have suggested, to showcase him for a trade). Only five days later, he was traded to the Milwaukee Brewers along with John Hellweg and Ariel Pena for pitcher Zack Greinke. He had gone 0 for 3 in his sole game for the Angels. He hit .264 in 44 games for the Brewers, playing regularly at shortstop over the last two months of the year. His performance was impressive enough for the Brewers to make him their starter at shortstop.

On April 19, 2013, he was at the center of an extremely strange play in the 8th inning of a game against the Chicago Cubs. He hit an infield single and stole second base. Ryan Braun then drew a walk, but pitcher Shawn Camp picked Segura off second base, getting him in a rundown. Braun took advantage of the play to move to second base, but Segura escaped the pickle and both runners were now on second base. The Cubs tagged both of them, and umpire Phil Cuzzi correctly called Braun out, as Segura was entitled to the bag as the lead runner. However, Segura misunderstood the ruling and began heading back to the dugout, thinking he was out. The first base coach managed to catch his attention and get him to stop at first base. He was allowed to remain at the bag, since, while he had run the bases backwards, he had not done so in order to sew confusion or to make a mockery of the game, but as the result of a genuine mistake, and thus did not run afoul of Rule 7.08 (i). Segura immediately attempted to steal second base again, but was thrown out. He had a great game against the Pittsburgh Pirates on April 29th, when he hit a two-run homer off Wandy Rodriguez as the second batter in the 1st inning, then later added a triple in a 10-4 rout. Carlos Gomez joined him in hitting both a triple and a homer, and the Brewers were the first team since the San Francisco Giants in 1958 to collect three triples and five homers in a game. On May 28th, he became only the third batter in Brewers history, after Johnny Briggs and Kevin Reimer, to collect 6 hits in a game when he went 6 for 7 in a 14-inning loss to the Minnesota Twins. His fifth hit tied the game in the 9th inning, and improved his batting average to .365, best in the National League at that point. It was the first six-hit game in the majors in four years, Adrian Gonzalez having been the last to do so in 2009. Ironically, the three six-hit games in Brewers history came at exact 20-year intervals, Briggs having accomplished his in 1973, and Reimer in 1993. Segura was named to his first All-Star team that summer as a result of his tremendous first half. However, he returned to more human numbers in the second half. He finished the year at .294 with 20 doubles, 10 triples and 12 homers, 74 runs and 49 RBIs, and also stole 44 bases.

Segura went on bereavement leave on July 12, 2014, the result of the sudden death of his nine-month-old son Janniel in the Dominican Republic; he returned to the team on July 17th, his absence having coincided with the All-Star break. His batting average fell to .246 that season, with 5 homers and 31 RBIs in 146 games as his OPS+ took a dive from 105 to 70. In 2015, his batting average went up slightly, to .257, but his OPS+ did not recover, as it was 68 at the end of the year. In 142 games, he had 16 doubles 5 triples and 6 homers, scored 57 runs and drove in 50. It seemed increasingly like it was his 2013 season that was an aberration. The Brewers decided to move in another direction after the season, as on January 30, 2016, they traded Jean and P Tyler Wagner to the Arizona Diamondbacks in exchange for P Chase Anderson, 2B Aaron Hill and prospect Isan Diaz.

On April 7, 2016, he had an excellent game for the Diamondbacks against the Chicago Cubs. He led off the game with a homer off John Lackey, then in the 2nd, hit a deep drive to left-center. OFs Dexter Fowler and Kyle Schwarber collided, and the ball landed for an inside-the-park homer as Schwarber injured an ankle on the play. He was only the 8th player in history to hit both a lead-off homer and an inside-the park homer in the same game, the last having been Hanley Ramirez in 2006. It turned out to be an outstanding season for Segura, who had moved to 2B with Arizona: in 153 games, he hit .319 with 41 doubles, 7 triples and 20 homers. He led the National League with 637 at-bats and 203 hits and was sixth in total bases at 318. He also stole 33 bases and scored 102 runs. On November 23rd, the D-backs cashed in on this unexpectedly good performance, sending him to the Seattle Mariners alongside OF Mitch Haniger and P Zac Curtis in return for two very talented young players who had not yet established themselves as top-notch regulars in the majors, P Taijuan Walker and SS Ketel Marte. In Seattle, he was expected to move back to shortstop, with Robinson Cano entrenched at second base.

In 2017, Segura hit .300 with 11 homers and 45 RBIs in 125 games, a drop-off from his career year but still a very nice output. He followed that in 2018 by hitting .304 with 10 homers and 63 RBIs, also scoring 90 runs in 144 games. He stole 22 and 20 bases those two seasons, although he was also caught 11 times the second year. He was also an All-Star for the second time the second year. The Mariners missed the postseason both years, though and after the 2018 season, management decided to proceed with a fire sale, getting rid of most veterans, including him. On December 3rd, he was sent to the Philadelphia Phillies along with Ps Juan Nicasio and James Pazos in return for J.P. Crawford, 1B Carlos Santana and others.

Segura spent four seasons in Philadelphia, from 2019 to 2022 and was a regular the first three years, although not at the same position. In 2019, he played 142 games at shortstop and hit .280 with 12 homers and 60 RBIs, but his OPS+ was only 91. The 2020 season was shortened to 60 games by the COVID-19 pandemic, and he played in 54 of them, splitting his time between second base and third base. he hit .266 with 7 homers and 25 RBIs, seemingly poorer numbers than the year before, but in fact his OPS+ improved to 107 largely due to a better walk rate. In 2021, he was the starting second baseman with Didi Gregorius at shortstop and hit .290 in 131 games with 14 homers and 58 RBIs, with an OPS+ of 111. In 2022, he faced more competition for playing time at second base with rookie Bryson Stott pushing him, and ended up appearing in 98 games during which he hit .277 with 10 homers and 33 RBIs. The Phillies finally made it back to the postseason that year after years of falling just short, and Segura made his postseason debut in the Wild Card Series against the St. Louis Cardinals in what was his 11th major league season. He had been the active leader for games played without a postseason appearance prior to that series. He shined in the Division Series against the Atlanta Braves, when he went 6 for 13 (.462) with 2 doubles, and also played regularly in the NLCS and the World Series, against the San Diego Padres and the Houston Astros, respectively. His bat was pretty quiet in the final two rounds - a combined 5 for 38. With Stott ready to be a full-time player and the Phillies signing Trea Turner to a large free agent contract, it left no room for Segura, whose contract was bought out after the season, making him a free agent. On December 28th he moved to the Miami Marlins who signed him for two years at $17 million.