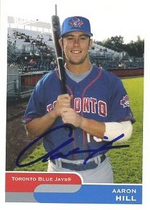 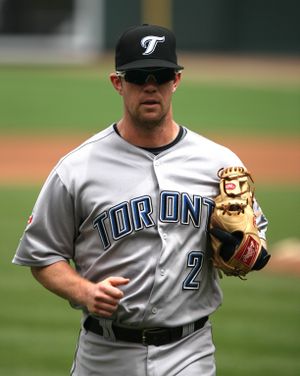 Playing for the Blue Jays.

Born in Visalia, CA, he attended high school in Visalia and then went to Louisiana State University. In 2002 with LSU, he hit .329 and slugged .550, while the next year he hit .358 and slugged .592. In the 2002 World University Championship, Hill batted .400/.531/.920 with 4 doubles, 3 homers and 9 RBI in 7 games, but failed to make the All-Tournament team. He was a first round pick in the 2003 amateur draft by the Toronto Blue Jays. Hill was signed by scout Jaymie Bane and made his pro debut that summer.

He impressed at his first minor league stop, hitting .361 and slugging .492 in 33 games at Auburn of the New York-Penn League in 2003. Moving the same year to Dunedin in the Florida State League, he hit .286 but without power. In 2004, he came up to AA ball in the Eastern League with the New Hampshire Fisher Cats, hitting .279 and slugging .410. He started 2005 with the Syracuse SkyChiefs of the AAA International League, but showed that he was ready to move up to the big club by hitting .301 and slugging .468 in 38 games.

He had been a shortstop in the minors, but in the majors in 2005 was primarily a third baseman, and in 2006 was mostly a second baseman, although he played some shortstop both seasons. He was a full-time second baseman after that, until moving to third base in 2016, and progressed defensively to the point where he was considered one of the best at the position in the majors. He hit .274 in 2005, and .291 in 2006, both years without much power, and without stealing many bases. He took a step forward in 2007, when he hit 47 doubles and 17 homers while still batting .291. However, a serious concussion from a collision with David Eckstein in June forced him to miss the rest of the season, limiting him to just 55 games in 2008. Hill suffered for months with headaches, sleepless nights and dizzy spells.

The Blue Jays' second baseman was awarded the American League Comeback Player of the Year Award for the 2009 season. He returned to the starting line-up on opening day. He came back in fine form, and joined his fellow Blue Jay Roy Halladay in the 2009 All-Star Game in St. Louis. He finished the season with a .286 average in 158 games, and was first among MLB second basemen in home runs, RBIs, total bases and at-bats. He led the American League in at bats and plate appearances, the result of playing nearly every game while hitting second in the line-up, while topping 100 runs and RBI for the first time of his career, in addition to his 36 home runs. He struggled at the plate in 2010, however, hitting only .205 in 138 games, although he still showed good power with 22 doubles and 26 homers. In 2011, his average improved very slightly, but his power almost completely disappeared, although he continued to play well in the field. He was hitting .225 with 6 home runs in 104 games when the Jays traded him along with John McDonald to the Arizona Diamondbacks in return for the D-Backs' starter at second base, Kelly Johnson, who was having a year similar to Hill's 2010 season. Arizona was nursing a slight lead over the San Francisco Giants in the NL West at the time and was looking to improve its defense for the stretch run by acquiring two excellent glove men. But Hill also helped with the bat, regaining his hitting stroke in his 33 games with Arizona, to the tune of a .315 average with 23 runs scored. In the Diamondbacks' loss to the Milwaukee Brewers in the NLDS, he collected 5 hits and 5 walks, including a homer.

Hill returned as Arizona's starting second baseman in 2012 and continued to hit well. On June 5th, in a game against the Colorado Rockies, he fell a double shy of hitting for the cycle when he struck out in his last at-bat of the game, but on June 18th, facing the Seattle Mariners, he completed the feat for the first time in his career in a 7-1 win. He then repeated the feat barely two weeks later, in a 9-3 win over the Milwaukee Brewers on June 29th. That made him the first player to hit for the cycle twice in the same season since Babe Herman in 1931. He had an excellent season overall, hitting .302 in 156 games, with 44 doubles, 26 homers, 93 runs scored and 85 RBI. He was off to another good start in 2013, hitting .306 with 3 doubles and 2 homers in 10 games, when he fractured his left hand when hit by a pitch by James McDonald of the Pittsburgh Pirates on April 16th. He came back on June 25th and was limited to 87 games, during which he hit .291 with 21 doubles and 11 homers, driving in 41 runs.

Hill was fully healthy at the start of the 2014 season, but he started slowly, just like his team which had the worst record in the majors when they faced the Chicago Cubs on April 23rd in a game marking the 100th anniversary of the first major league game played at historic Wrigley Field. Hill was the hero for Arizona that day, as he collected four hits, including a two-run triple off Justin Grimm with two outs in the 9th that gave the D-Backs a come-from-behind 7-5 win. He played 133 games, hitting .244 with 10 homers and 60 RBIs as the D-Backs had a rough season, finishing last in the NL West. In 2015, he lost his starting job at second base, splitting his time between second and third and rounding out his time with pinch-hitting appearances to play 116 games. He hit .230 with 6 homers and 39 RBIs, with his OPS+ falling to 73.

On January 30, 2016, he was traded to the Milwaukee Brewers along with P Chase Anderson and prospect Isan Diaz in return for SS Jean Segura and P Tyler Wagner. He was moved to third base that season. On May 7th, he had a great game for the Brewers, blasting three home runs including a 10th-inning grand slam, in a 13-7 victory over the Cincinnati Reds. He hit a two-run blast in the 6th, a solo homer in the 8th which tied the game, and then the slam off Caleb Cotham as part of a seven-run outburst. He tied team records for for most homers and RBIs in a game. He was hitting a solid .283 with 8 homers and 29 RBIs after 78 games when he was traded to the Boston Red Sox on July 7th. The Brewers received prospects Aaron Wilkerson and Wendell Rijo. For Boston, he hit just .218 in 47 games, and during the postseason only made one at-bat in Boston's loss to the Cleveland Indians in the Division Series. He moved to the San Francisco Giants for 2017, but it was clearly the end of the road as he hit just .132 in 34 games. He played his final game on June 23rd and was handed his release six days later, bringing his career to an end.