Shortstop David Eckstein is beloved by fans for his passion for the game, positive attitude, hustle, and scrappy play. 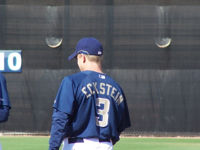 Undrafted out of Seminole High School, Eckstein was a walk-on second baseman at the University of Florida. He was selected by the Boston Red Sox in the 19th round of the 1997 amateur draft. He rose through the ranks of the Red Sox organization, regularly hitting over .300, but was considered by the club to have limited talent. He reached the AAA Pawtucket Red Sox in 2000 and hit just .246 there. The Sox put him on waivers on August 16th, and he was claimed by the Anaheim Angels. He immediately bounced back, hitting .345 in 15 games with the Edmonton Trappers, all at second base.

Eckstein made his big league debut in 2001 as the Angels starting shortstop on Opening Day, due to an injury to Benji Gil and the emergence of Adam Kennedy at second base. He finished fourth in that season's Rookie of the Year voting, and the next season, he helped the Angels win the World Series. Eckstein led the American League in HBP and sacrifice hits in 2001 and 2002. When the Angels signed shortstop Orlando Cabrera after the 2004 season, Eckstein became expendable and was let go. Within a few days, he signed with the St. Louis Cardinals. In 2005 he was voted the starting shortstop for the National League All-Star team, and he was an All-Star again the following year. He led the Cardinals with 7 triples in 2005. Two times in a 17-day stretch that season, Eckstein won a game with a "walk-off bunt". He hit .364 in the 2006 World Series and was named that year's World Series MVP. He joined Bucky Dent, Alan Trammell, and Derek Jeter as only shortstops to win the award.

In 2010, playing for the San Diego Padres, he set a National League record with a streak of 113 consecutive errorless games at second base. The record stood only two years, as Darwin Barney put together a 141-game streak with the Chicago Cubs in 2012.

Eckstein is married to actress Ashley Drane. Three of his siblings and his father suffer from kidney ailments and have had transplants. Eckstein's brother Rick Eckstein was the hitting coach for the New Orleans Zephyrs in 2006 and will have the same role with the Memphis Redbirds in 2007; Rick also coached for Team USA in the 2005 Baseball World Cup.