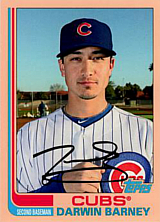 Second baseman Darwin Barney was a star of the 2007 College World Series. He made his major league debut with the Chicago Cubs in 2010 and won a Gold Glove in 2012.

Barney hit .611 as a high school senior with 19 steals in 19 tries. He went on to Oregon State University and batted .301/.380/.376 as a freshman. He was named the Pacific-10 Conference Freshman of the Year and Baseball America named him a second-team freshman All-American after Todd Frazier at shortstop. Collegiate Baseball named him a freshman All-American. In his sophomore season, Barney batted .330/.430/.395 and led the Pac-10 with 261 at bats. He was second with 43 walks and 4th with 16 steals. He was named to the All-Conference team as an infielder and started on a team that won the 2006 College World Series. He then joined Team USA, hitting .258 and slugging .355. He got the most at-bats of any of their shortstops, edging out Frazier and Zach Cozart. Barney batted .302/.377/.442 as a junior with 53 runs (2nd on OSU), 56 RBI (third) and 14 steals. In the 2007 College World Series, he hit a key 2-run homer in the second inning of Game 2 against the University of North Carolina to put the Beavers ahead for good. He was named to the College World Series All-Tournament Team.

In his MLB debut on August 12, 2010, Barney was a defensive substitute for Blake DeWitt at second base in the 9th inning and had one putout. The next day, the former OSU star started at second base and hit 7th. He flew out his first two at bats against Jake Westbrook, grounded out in a third battle with Jake and grounded out against Ryan Franklin to end his day. He finished his first season hitting .241 in 30 games. Still a rookie in 2011, he beat out the struggling DeWitt for the Cubs' starting second baseman job and had a great first month, hitting .326 with 4 doubles and 14 RBI. That performance led to his being named National League Rookie of the Month. His season ran into a setback a few weeks later when he was placed on the disabled list on June 15 with a sprained left knee, injured while sliding in a game against the Milwaukee Brewers two days earlier. He returned to action on June 29 and reclaimed his starting spot. On August 14, he made highlight reels all over the country with a spectacular, back-to-the-plate, over-the-shoulder diving catch in short right field that robbed Dan Uggla of the Atlanta Braves of a sure hit and in effect put an end to his 33-game hitting streak. He played 143 games, hitting .276 with 2 homers and 43 RBI, scoring 66 runs.

Barney had a tremendous defensive season for the Cubs in 2012. He committed an error at second base on April 17, then did not make another one until September 28, when he threw wildly to first base on a ground ball by Justin Upton of the Arizona Diamondbacks. The 141 consecutive errorless games in one season shattered the National League record held by former Cub great Ryne Sandberg, and tied the major league mark set by Placido Polanco with the Detroit Tigers in 2007; alas, another clean inning would have given him the record outright. Not surprisingly, he won the NL Gold Glove Award at second base. Things were not so rosy with the bat, though, as he hit .254 in 156 games with little power and few walks. In 2013, his batting average fell to .208 in 141 games, with 25 doubles, 7 homers and 41 RBI. His OPS+ was only 56 as the Cubs lost over 100 games once again and finished in last place. Still, he managed to keep his starting job at the beginning of the 2014 season, largely on the strength of his glove. After 72 games, he was hitting .230 with 2 homers and 16 RBI when the Cubs decided to let him go, as he was designated for assignment on July 22. Veteran utility player Emilio Bonifacio was to come off the disabled list and was slated to take over second base for the time being, with youngster Arismendy Alcantara also on the roster and top prospect Javier Baez likely to make his debut before the end of the season. The abundance of players left no role for Barney. On July 28, he was sent to the Los Angeles Dodgers for future considerations. He hit .303 in 22 games for Los Angeles the rest of the way, but in only 33 at-bats.

Darwin re-signed with the Dodgers for one year, $2.5 million before [[2015 Dodgers|2015]. He played a couple of games early in the year, going 0 for 4, before being sent down to the Triple A Oklahoma City Dodgers. He hit .214 in 32 games before the Dodgers designated him for assignment on June 12. The Toronto Blue Jays acquired him in September; he played 15 games but was ineligible for postseason play. He re-signed with the Jays at season's end. On July 1, 2016, he started a game at second base, then 18 innings later, after going 3 for 8 with a double at the plate, moved over to the mound. The Jays had run out of available pitchers by that time, and had already asked fellow infielder Ryan Goins to pitch the 18th. Goins escaped that inning without giving up a run, then manager John Gibbons turned to Darwin for the 19th, as the score was still tied, 1-1. Barney allowed a solo homer to Carlos Santana in his inning of work and was charged with the 2-1 loss. He appeared in 104 games in '16 (.269/.322/.373 in 306 plate appearances) and 129 games in '17 (.232/.275/.327 in 362 plate appearances) before becoming a free agent. He signed with the Texas Rangers for 2018, but was released during spring training and has not suited up since.

In 2019, Darwin became an investor in the Portland Diamond Project, the group looking to bring Major League Baseball to Portland, OR. In 2020, he was scheduled to be manager of the Nashville Sounds, the AAA affiliate of the Texas Rangers, before the season was cancelled due to Covid-19. Barney returned to Oregon State in August, 2020 as an assistant coach.

This manager's article is missing a managerial chart. To make this person's article more complete, one should be added.
Retrieved from "https://www.baseball-reference.com/bpv/index.php?title=Darwin_Barney&oldid=1208816"
Categories: