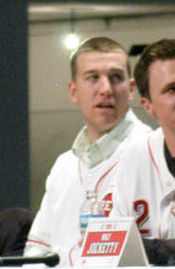 Todd Frazier was selected 34th overall by the Cincinnati Reds in the first round of the 2007 amateur draft. Baseball America declared him the top professional prospect in the Northern Region, and the publication also named Frazier a 2007 first team All-American. Frazier played shortstop for three seasons at Rutgers University, hitting 42 career home runs. His brothers, Jeff Frazier and Charlie Frazier, are also baseball players. Jeff made his major league debut with the Detroit Tigers in 2010, while Charlie spent five seasons in the Florida Marlins' system.

Frazier first made headlines as a little leaguer in 1998, winning the Little League World Series as a member of Toms River East. He struck out the final batter from the Kashima, Japan team to seal a 12-9 USA victory. Frazier finished the World Series tournament with a .600 average and 4 home runs. He was 4 for 4 with 3 runs and a homer in the finale and also tied the LLWS record with 8 walks for the tournament and tied the 44-year-old single-game record of four walks. 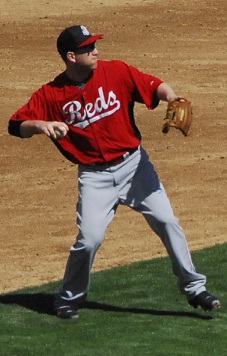 The Colorado Rockies drafted Frazier in the 37th round of the 2004 amateur draft after he had a stellar high school career that included a .521 batting average during his senior season; the low selection was presumably because Frazier had opted to go on to college, as he chose instead to play for coach Fred Hill at Rutgers University. He was a Baseball America Freshman All-American, and hit .295/.392/.505 with 9 home runs and 19 stolen bases during his first collegiate season. Frazier hit .366/.471/.599 and tacked on 11 home runs during his sophomore campaign. He made the Big East Conference All-Conference team at shortstop. That summer, he joined the USA college national team. He hit .224 and slugged .368, the lowest average of any position player on a team that would win Gold in the 2006 World University Championship.

His Junior season was by far his best, as he posted a .377 average with 22 home runs, 24 doubles, 62 walks, and 25 stolen bases. He led the Big East in homers (9), runs scored (35), total bases (73) and slugging percentage (.689) in conference competition and was the unanimous Big East Player of the Year. His performance led Rutgers to the College World Series regional qualifiers, where he went 4 for 12 with 4 doubles and 2 walks.

After his selection by the Reds in the 2007 amateur draft, Frazier was signed by scout Lee Seras and made his professional debut with the Billings Mustangs on July 11th. He had two hits, a run, and an RBI in the game. On July 22nd, he hit his first professional home run. He hit a stellar .319/.405/.538 between Billings and the Dayton Dragons that first year. In 2008, he hit .321 in 30 games for Dayton to earn an early promotion to the Sarasota Reds of the Florida State League. He hit .281 with 20 doubles and 12 homers in 100 games to continue his progression up the ladder. 2009 found him with the AA Carolina Mudcats, where he hit .290 in 119 games before playing another 16 games at AAA with the Louisville Bats. Combined, he was .292/.351/.481, with 45 doubles and 16 homers. He had his first slightly off season with Louisville in 2010, being limited to a .258 average in 130 games; he still showed good power though, with 32 doubles and 17 homers. He was again at Louisville for the start of the 2011 season and played 90 games there, hitting .260 with 18 doubles and 15 homers.

Frazier reached the major leagues with the Reds in 2011, making his debut on May 23rd, going 0 for 1 as a pinch-hitter. He returned to Louisville after the game, then came back for good on July 22nd. He played 41 games, hitting .232 with 6 homers and 15 RBI. He hit his first big league homer on July 31st, off the San Francisco Giants' Barry Zito in a 9-0 win. He played another 10 games with Louisville before coming back to the Reds in 2012. On May 16th, he had his first two-homer game in front of friends and family at Citi Field; Cincinnati beat the New York Mets, 6-3. He connected off Johan Santana and D.J. Carrasco. He got to play regularly when 1B Joey Votto went on the disabled list in late June and was out for two months; he was one of the reasons the Reds managed to stay in first place in spite of the absence of their offensive leader, as he was named American League Rookie of the Month for August. That month, he collected 36 hits and 25 RBI, batted .330 and scored 19 runs. He also hit 6 home runs. Ironically, Votto had been the last Reds player to win that honor, in September of 2008. He finished the season with a batting line of .273/.331/.498 in 128 games, with 26 doubles, 19 homers and 67 RBI. He then went 1 for 6 in the NLDS, as Votto was back in the line-up. Frazier finished third in the Rookie of the Year vote, behind Bryce Harper and Wade Miley, but did receive 3 first-place votes. He was however named the third baseman on the 2012 Topps All-Star Rookie Team.

Even though the Reds as a team were not playing so well in the first few months of the 2015 season, Frazier was having an outstanding year as the team's third baseman. On June 17th, he had a tremendous game against the Detroit Tigers, hitting a solo homer in regulation time before ending the game with a walk-off grand slam off Joakim Soria with two outs in the 13th for an 8-4 victory. He was named to the All-Star team for the second straight year, this time being voted as a starter for the National League, with the added bonus that it was being played at home that year. He then won the annual Home Run Derby by defeating rookie Joc Pederson in the final round, becoming only the second player after Ryne Sandberg in 1990 to win the competition at home. His brother Charlie was his pitcher in the Derby. He finished the season at .255 with 43 doubles and 35 homers, 82 runs scored and 89 RBIs. However, the Reds began trading away veterans during the season, and when the off-season came around, it was his turn to hit the trading block. On December 16th, he was sent to the Chicago White Sox in a trade also involving the Los Angeles Dodgers. The Reds received three prospects from L.A., including IF Jose Peraza, while the White Sox sent three young players to the Dodgers to complete the deal.

Frazier's time with the White Sox was a bit of a disappointment. In 2016, he hit only .225 in 158 games, albeit with good power: 21 doubles and 40 homers, a personal best, good for 89 runs and 98 RBIs, both also personal bests. The team went nowhere however. In 2017, he was hitting .207 after 81 games, with 16 homers and 44 RBIs, when the White included him in a trade meant to strengthen their farm system. On July 18th, he was sent to the New York Yankees alongside Ps Tommy Kahnle and David Robertson in return for P Tyler Clippard and three prospects - Ian Clarkin, Tito Polo and Blake Rutherford. In spite of playing well, the Yankees had received little production from the first base position thus far, and his acquisition was meant to address this key deficiency on a temporary basis, given he was slated to become a free agent after the season. In the end, the Yankees decided to keep Frazier at third and to move 3B Chase Headley over to first base. In Frazier's first plate appearance at New Yankee Stadium, he hit into a phenomenally rare play: a triple play that resulted in a run. Coming up against his old team the Reds with none out and the bases loaded in the 2nd, he hit a grounded to SS Jose Peraza who stepped on second a relayed to 1B Joey Votto for two outs. However, Didi Gregorius, the runner on second, hesitated between second and third base thinking that Peraza had a chance to catch the ball on the fly. Votto saw him and threw to third to catch Gregorius in a rundown and he was called out for leaving his base line, but not before Matt Holliday has crossed home plate. Because the final out was not the result of a force out, the run was allowed to stand. The Yankees went on to beat the Reds, 4-2. He hit .222 in 66 games with the Yankees, with 11 homers and 32 RBIs. He then played regularly in the postseason, getting 4 hits in both the ALDS against the Cleveland Indians and in the ALCS against the Houston Astros. He hit one homer, which came with 2 men on in the 2nd inning of Game 3 of the ALCS against Charlie Morton of the Astros.

On February 5, 2018, it was reported that Frazier had signed a two-year contract with the New York Mets worth $17 million, allowing him to remain in the New York area. The Mets got off to a great start, but Frazier was not doing much until April 13th, when he hit his first two homers of the year to lead his team to a 6-5 win over the Milwaukee Brewers, improving to 11-1. On May 2nd, he vented his frustration by questioning the consistency of umpires' calls. On September 3rd, he managed to pull off a switcheroo worthy of magician David Copperfield as he dove into the stands to go after a foul ball, tumbled into the first row of seats and emerged showing the ball to third base umpire Mark Wegner, who ruled a catch. He quickly tossed the baseball to a fan - and with good reason: he needed to hide the evidence. Indeed, the film of the play showed that he never caught the actual baseball, but instead picked up a rubber youth ball he found in the stands and showed that to the umpire while pretending he had made a spectacular grab! Just as the Mets who had faded quickly after their quick start, Todd had a rather disappointing season. He hit .213 in 115 games, with 18 homers and 59 RBIs.

In May of 2019, he was involved in a very public feud with OF Adam Eaton of the Washington Nationals. With both teams playing well below expectations, the two exchanged barbs over a couple of days. Apparently, there was bad blood between them from the time they had been teammates with the White Sox a few years earlier. He had a season in line with his career averages for the Mets, hitting .251 with 21 homers and 76 RBIs in 133 games, good for an OPS+ of 106. A free agent at the end of the season, he signed a one-year deal with the Texas Rangers on January 12, 2020 for $5 million. He played 31 games for the Rangers during the pandemic-shortened season, hitting .241 with 2 homers and 7 RBIs. At the trading deadline on August 31st, he was sent for a second stint with the Mets, Texas obtaining minor leaguer Ryder Ryan in return a couple of months later. He played another 14 games for his new team, and hit .224 for a combined line of .236, 9 doubles, 4 doubles and 12 RBIs in 45 games. The following February, he signed a minor league contract with the Pittsburgh Pirates and expectations were that he would platoon with Colin Moran at first base for the team in 2021. However, on March 27th, he opted out of his contract, because in spite of hitting for good power in the Grapefruit League, with 2 doubles and 3 homers in 12 games, giving him a slugging percentage of .643, the Pirates were not ready to add him to the major league roster. They figured that on a rebuilding team, it was better to give whatever playing time he would have obtained to someone with more defensive flexibility, Phillip Evans.