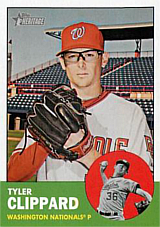 "I don't try to strike out everyone that I face. Strikeouts just kind of happen with the way I pitch." - Tyler Clippard 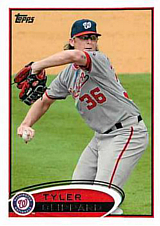 Tyler Clippard is a two-time All-Star reliever, best known for his work out of the Washington Nationals bullpen during a thirteen-season career.

Clippard was chosen by the New York Yankees in the 9th round of the 2003 amateur draft, signed by scout Scott Pleis, and debuted with the GCL Yankees, going 3-3 with a 2.89 ERA. In 43 2/3 innings, he allowed 33 hits and 5 walks while striking out 56. Moving up to the Battle Creek Yankees in 2004, Clippard had a 10-10, 3.44 record with a K/BB ratio of 4.53. The right-hander was 10-9 with a 3.18 ERA for the 2005 Tampa Yankees. Opponents hit .219 against him and he struck out 169 in 147 1/3 innings while walking 34. He also made one appearance each for the Charleston RiverDogs (0-1, 7.50, 10 strikeouts in 6 innings) and the Columbus Clippers (one scoreless inning, two strikeouts). He led Yankees farmhands in strikeouts and finished fifth in the affiliated minor leagues, behind Francisco Liriano, Joel Zumaya, Rich Hill and Chuck James. He also led the Florida State League in strikeouts and was 7th in ERA. He failed to make the FSL postseason All-Star team and Baseball America did not rank him as one of the league's top prospects.

Moving up to AA in 2006, Tyler was 12-10, 3.35 for the Trenton Thunder, again leading Yankee farmhands in strikeouts (175). He allowed just a .200 batting average and had three times as many strikeouts as walks. He threw the first no-hitter in Thunder history on August 17th, shutting down the Harrisburg Senators. He also won 9 straight games at one point, breaking a club record of 8 shared by Tomo Ohka and Carl Pavano. He teamed with Philip Hughes to form the top 1-2 duo in the Eastern League. Clippard again was fifth in the affiliated minors in strikeouts, trailing Yovani Gallardo, Francisco Cruceta, Matt Maloney and Franklin Morales. He led the EL in strikeouts and was 7th in ERA, between Devern Hansack and Chris Begg. Baseball America ranked him the 10th best prospect in the EL between a pair of Sanchezes, Humberto and Jonathan. Clippard began 2007 with the Scranton/Wilkes-Barre Yankees. He was 3-2 with a 2.72 ERA in his first 8 starts, striking out 41 in 39 2/3 innings but allowing 40 hits and 17 walks. When Darrell Rasner broke his finger in May, Clippard was called up to New York.

Tyler became the 7th rookie to start a game for the Yankees in 2007, following Hughes, Matt DeSalvo, Rasner, Chase Wright, Kei Igawa and Jeff Karstens. In his debut on May 20th, Clippard allowed one run on 3 hits in 6 innings against the New York Mets with a 2nd-inning homer by David Wright the sole tally against him. Tyler also doubled off Scott Schoeneweis in the 6th inning, just his third plate appearance since high school; the other two had been earlier in the game. Clippard was 3-1 with a 6.33 ERA in 6 starts for New York, walking 17 in 27 innings. In the minors, he was 4-4 with a 4.15 ERA for Scranton/Wilkes-Barre and 2-1, 5.40 for Trenton. In the winter of 2007, Clippard was sent to the Washington Nationals for Jonathan Albaladejo, a deal the Yankees would regret. Tyler spent most of 2008 with the Columbus Clippers, going just 6-13 with a 4.66 ERA in a pitcher-friendly league; he was 1-1 with a 4.35 ERA in two major league starts for Washington. He tied Yorman Bazardo and Charlie Haeger for the most losses in the International League. Moving to the bullpen in 2009, albeit somewhat reluctantly at first, Tyler was excellent with the Syracuse Chiefs (4-1, 1 save, 0.92 in 24 games, 20 hits allowed, 42 strikeouts in 39 innings). With the Nats, he went 4-2 with a 2.69 ERA in 41 games, striking out 67 in 60 1/3 innings and allowing only a .172 opponent average - .122 against lefties.

Clippard began 2010 strong, with a 7-3 record and 2.15 ERA in Washington's first 40 games. The only other reliever to get 10 decisions in his team's first 40 games was Mike Marshall, also 7-3, back in 1979 with the Minnesota Twins. To that point, Clippard was 3-for-11 with a double as a big league batter. He finished the season with a record of 11-8, 3.07 and 1 save in 78 games, leading the Nationals in wins despite working exclusively in relief. In 2011, he was 1-0 with an excellent 1.75 ERA over the first half when he was named the Nats' sole representative at the 2011 All-Star Game. In the game, he relieved Cliff Lee with two on and two out in the 4th inning; the only batter he faced, Adrian Beltre hit a sharp single to left, but the inning ended when Hunter Pence gunned Jose Bautista at home. Clippard was replaced by Clayton Kershaw to start the 5th, but in the meantime, the National League had scored 3 runs on Prince Fielder's home run in the bottom of the inning to take a lead they never relinquished; he was thus credited with the 5-1 win. He finished the season with a record of 3-0, 1.83 in 72 games, with 104 strikeouts and only 36 walks in 88 1/3 innings. He also gave up only 48 hits, for a tremendous WHIP of 0.84.

Clippard was the Nationals' closer for most of 2012 with Drew Storen on the sidelines, and handled the job satisfactorily. In 74 games, he went 2-6, 3.72, recording 32 saves and allowing 55 hits in 55 2/3 innings; he walked 29 and struck out 84. He tied J.J. Putz for 7th in the NL in saves. The Nationals went on to win the first division title in their history and Tyler was used three times in the postseason, giving up a run in 3 innings with no decisions in the Division Series against the St. Louis Cardinals. He followed that performance with a season in which he went 6-3, 2.41 in 72 outings in 2013, allowing a mere 37 hits in 71 innings while striking out 73 as the Nats' top set-up man. Clippard was an All-Star again in 2014, after his customary understated but outstanding performance in the first half. By the end of August, he was approaching some hallowed territory as, since the beginning of 2010, he had pitched over 350 times with an ERA around 2.60. One could only find three other similar five-year stretches combining such a large number of appearances with such a low ERA by a reliever: Robb Nen from 1996 to 2000 or 1998 to 2002, and Dan Quisenberry from 1982 to 1986. The main difference was the other two were closers who gathered a lot of publicity, while Clippard toiled in relative obscurity, which did not make him any less valuable to the Nationals. He finished the season with a record of 7-4, 1 save and a 2.18 ERA. In 70 1/3 innings, he allowed only 47 hits and 28 walks while striking out 82 men. He pitched 3 times in the NLDS, which the Nationals lost to the San Francisco Giants, giving up only 1 hit and 1 walk in 3 innings. Afterwards, there were questions raised about why, with the season on the line, manager Matt Williams did not call on him in the crucial 7th inning of Game 4, when the Giants scored the go-ahead run against rookie Aaron Barrett.

Eligible for salary arbitration heading into the 2015 season, he was about to become expensive, and despite his outstanding contributions since he had joined the team, the Nationals decided on January 14th to trade him to the Oakland Athletics in return for shortstop Yunel Escobar. In Oakland, he took over the closer job when incumbent Sean Doolittle was sidelined with injury and recorded 17 saves in 37 outings, to go along with a 1-3 record and 2.79 ERA. The A's fell out of contention early, and just before the trading deadline, on July 27th, he was sent to the New York Mets in return for minor league pitcher Casey Meisner. The trade became even more important the next day as Jenrry Mejia was suspended for testing positive for a banned substance for the second time that year, resulting in a 162-game suspension and leaving a big hole to be filled in the Mets' bullpen. Tyler made 32 outings for the Mets, going 4-2, 3.06 with a couple of saves. He also pitched 8 times in the postseason, although he was not as effective, giving up 5 earned runs in 6 2/3 innings and being charged with a loss in Game 4 of the World Series against the Kansas City Royals on Halloween.

Clippard became a free agent after the season and it took him a while to find a team. On February 8, 2016, he signed a two-year deal with the Arizona Diamondbacks, worth $12.25 million, as the D-Backs were gearing to make a run at the NL West after an offseason of lavish spending. Tyler pitched 40 times for Arizona, going 2-3 with 1 save and a 4.30 ERA. By the end of July, it was clear that the team would not make a postseason run, so on July 31st, they traded him to the New York Yankees, where it all began, for Vicente Campos. The Yankees had just traded relievers Aroldis Chapman and Andrew Miller for prospects and needed a set-up man for newly-minted closer Dellin Betances. He went 2-3, 2.49 in 29 games with 2 saves the rest of the way. In 2017, he was counted on to form a "big three" in the bullpen alongside Betances and a re-signed Chapman, but he ran into some trouble, putting up an ERA of 4.95 over the first three and a half months, with a record of 1-5 and 1 save. On July 18th, he was traded again, this time to the Chicago White Sox, along with three prospects, Ian Clarkin, Tito Polo and Blake Rutherford, for Todd Frazier, Tommy Kahnle and David Robertson. He did not stay long in Chicago, going 1-1, 1.80 in 11 games with 2 saves, before moving to the Houston Astros on August 13th for future considerations. Things immediately went south in Houston, as he was 0-2, 6.43 with 2 saves in 16 games. Even though the Astros had some issues with the back end of their bullpen entering the postseason, they decided Clippard was not part of the solution, and he was left off the roster as Houston won its first World Series title.

Given his up-and-down recent year, Clippard had difficulty finding a job in 2018. He eventually agreed to a minor league contract with the Toronto Blue Jays on March 7th. He made the Opening Day roster, establishing a new major league record in August when he took the mound for a start against the Astros. It had been 680 appearances since he last took thee ball to open a game. In 73 games as a righty specialist, Tyler was 4-3 with a 3.67 ERA and 85 strikeouts in 68 2/3 innings. As was now becoming customary, it took until February 23, 2019 for a fish to bite on him again, joining the Cleveland Indians on a minor league pact. He started the year in Triple A, getting the call in late April to become one of the team's better relievers, appearing 53 times with a 2.90 ERA and 64 strikeouts. He only had to wait until December for his next deal, a big league affair, with the Minnesota Twins for 2020.