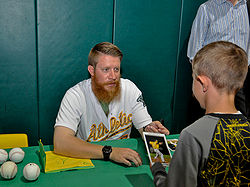 Sean Doolittle was a first-round draft pick in 2007. Drafted as a hitter, he made the majors five years later as a pitcher.

Doolittle was named New Jersey's high school player of the year by Baseball America and Gatorade. He was taken by the Atlanta Braves in the 39th round of the 2004 amateur draft as he was not expected to sign, having planned for college.

Doolittle debuted professionally with the Vancouver Canadians on June 20th, going 3 for 5 with a double and a run against the Tri-City Dust Devils. Doolittle split 2008 between the Stockton Ports and Midland RockHounds, hitting 22 homers with a .286/.358/.495 line.

Doolittle advanced to AAA with the Sacramento River Cats in 2009, but his season was ended after 28 games by tendinitis in both knees. Eventually he needed surgery on his left knee, and he missed all of the next two seasons, except for 1 game in 2011 with AZL Athletics as a pitcher. Finally healthy in 2012 and now a full-time relief pitcher, Sean rocketed up the A's organization at warp speed. He began the year with Stockton of the California League, where he struck out 21 batters in 10 1/3 innings and put up an ERA of 0.87 in 6 games. He was immediately moved up to AA Midland, and put up similarly eye-popping numbers: 11 innings pitched, 2 hits allowed, 4 walks and 19 strikeouts. After 8 games in AA, he was promoted to AAA Sacramento, and continued to retire just about every batter he faced, giving up a hit and a walk in 3 2/3 innings, while striking out 8. In barely 2 months of pitching in the minors over two seasons, he had accumulated 26 innings, with an ERA of 1.04, 8 hits allowed, 8 walks, and a stunning 50 strikeouts. The A's called him up to Oakland on June 4th, and he made his major league debut the next day. As he explained:

"I thought it would be more of a process than this. I'm just as surprised as everybody else to be honest that the transition has gone as smoothly as it has. Never in a million years would I think having two months under my belt pitching that I'd be here."

In his first pitching appearance in the majors, Doolittle entered the game against the Texas Rangers in the 5th inning in relief of starter Travis Blackley with two outs and a runner on third. He struck out slugger Nelson Cruz to end the inning, then struck out Mike Napoli and Yorvit Torrealba to start the 6th, before Craig Gentry finally managed to put the ball in play, a soft line drive to first baseman Kila Ka'aihue. He left the game after that inning, having impressed all observers. He ended up making 44 appearances out of the A's bullpen that season, and was an important contributor to a completely unexpected division title. He went 2-1 with a 3.01 ERA and 1 save, striking out 60 batters in 47 1/3 innings, against only 40 hits and 11 walks. He pitched three times in the ALDS against the Detroit Tigers, giving up 3 runs on 5 hits in 2 2/3 innings; two of the runs were unearned, and he struck out 5 batters while walking none.

Doolittle had another solid season out of the A's bullpen in 2013, when he made 70 appearances with a record of 4-4, 2.71 and 2 saves. He pitched 69 innings as a set-up man for Grant Balfour, striking out 60 batters and walking only 13. He again pitched in the postseason, with four appearances facing the Tigers in the ALDS. He was the loser in Game 4 on October 8th, when he relieved Dan Straily to start the 7th with the A's having just taken a 4-3 lead; he gave up a homer to Victor Martinez to tie the game, then allowed a double to Jhonny Peralta, then retired the next two batters before walking José Iglesias. Austin Jackson then lined a single to right, scoring Peralta with what would be the game's deciding run. Those were the only hits or runs he gave up in 4 1/3 innings during the Series, but they obviously came at the wrong moment.

Back with the A's at the start of 2014, he was given a vote of confidence by his employers when he signed a five-year contract worth $10.5 million on April 21st. He put up some astonishing numbers that season: on June 20th, he had compiled 48 strikeouts while walking only one batter! He was also on a streak in which he had retired 51 of the last 55 batters he had faced, while pitching 20 consecutive scoreless innings as the A's new closer. On June 22nd, he was called upon for his past batting experience as he was used as a pinch-hitter against Boston Red Sox closer Koji Uehara in the 10th inning of a 7-6 loss with the A's out of position players and pitcher Fernando Abad due up; he grounded out to end the game, but according to teammates "he looked like a real hitter out there". On June 28th, his streak of 26 2/3 innings was snapped when he blew a 6-5 9th-inning lead against the Miami Marlins. He was named to the All-Star team for the first time that year, but on August 24th, he was placed on the disabled list with an intercostal strain, an injury that coincided with the A's falling out of first place in the AL West, having been caught by the Los Angeles Angels of Anaheim. He returned to pitch 7 more times in September as the A's were desperately clinging to a playoff spot, and finished the year at 2-4, 2.73, with 22 saves. He pitched 2 innings in the Wild Card Game against the Kansas City Royals on September 30th, giving up the tying run with two outs in the bottom of the 9th on a sacrifice fly by Nori Aoki that scored pinch-runner Jarrod Dyson; he followed that with a scoreless 10th inning, but the A's lost the wild game, 8-7, in 12 innings.

Heading into the 2015 season, Doolittle underwent plasma rich platelet treatment for a partially torn rotator cuff, making it likely he would miss the beginning of the season. In fact, after missing 7 weeks of action, he pitched only once, on May 27th, and returned immediately to the disabled list with a strained left shoulder. He explained that he experienced a "stabbing pain" in an area different from the previous injury. He was expected to be out for another extended stretch. Indeed, he only came back on August 23rd, by which time the A's had fallen well out of the postseason race. He made only 12 appearances that year, going 1-0, 3.95 with 4 saves. In 2016, he pitched 44 times, again missing time with various injuries, and went 2-3, 3.23 with another 4 saves. He pitched well when healthy, with 45 K's and only 8 walks in 39 innings.

Doolittle again missed time in the first half of 2017, but continued to do well when able to take the mound. In 23 games, he went 1-0, 3.38 with 3 saves and an outstanding K/W ratio of 31/2 in 21 1/3 innings. That was good enough to pique the attention of the Washington Nationals, who were desperate for bullpen help. On July 16th, they acquired him and fellow veteran reliever Ryan Madson in return for P Blake Treinen and two top prospects, Sheldon Neuse and Jesus Luzardo. Madson was expected to take the closer role with the Nats, but he was soon sidelined with an injury and Sean stepped into the breach, being successful in 15 of his first 16 save opportunities. He ended up saving 21 games in 30 appearances for the Nats, giving him a combined record for the year of 2-0, 2.81 in 53 games, with 24 saves and 62 strikeouts in 51 1/3 innings. In the postseason, he made three scoreless appearances and saved a game in the Division Series against the Chicago Cubs, but Washington continued its history of playoff futility by losing in five games.

Doolittle returned to the All-Star Game in 2018 as he went 3-3, 1.60 with 25 saves, but overall the season was a disappointment as injuries limited him to 43 games, and apart from him, the team's bullpen was a disaster area. Thus, the heavily-favored Nationals missed the postseason altogether, finishing well behind the first-place Atlanta Braves. He got off to another strong start in 2019, again with a team that was underperforming. He picked up his 8th save on May 18th, in his 20th appearance, while sporting an ERA of 1.71. In that game, a 5-2 win over the Cubs, he raised the ire of Chicago manager Joe Maddon, who took exception to his delivery to the plate, complaining that it was illegal and filing a protest after the game. Maddon's own pitcher, Carl Edwards Jr., had been forced to alter his delivery at the end of spring training, with initially disastrous results, after Major League Baseball had warned him that it was illegal due to an extra toe-tap; Maddon claimed that Doolittle was doing exactly the same thing as Edwards, something which umpire Sam Holbrook rejected, saying there was nothing wrong with his motion. Doolittle was the only Nationals reliever having any kind of success in the early going, putting up an ERA of 1.35 in April and racking up 23 saves by the end of July, in spite of the lack of a reliable set-up man. The Nationals acquired some veteran relievers to help hi out at the trading deadline, and he added 5 saves in his first 7 outings in August before suffering an epic meltdown on August 17th in a game against the Milwaukee Brewers. Tasked to preserve an 11-8 lead in the 9th, he allowed a lead-off homer to Christian Yelich, a double to Keston Hiura, and back-to-back homers to Mike Moustakas and Ryan Braun before recording an out. The Nationals managed to tie the game back in the bottom of the 9th and eventually lost it, 15-14, in 14 innings as his ERA jumped from 3.66 to 4.33. The next day, he was placed on the injured list with right knee tendinitis. During his time on the injured list, he lost his closer job to newly acquired Daniel Hudson, but in the postseason the two alternated between the 8th and 9th innings, and both made large contributions as the Nationals went on to win the first World Series in franchise history. He finished the regular season with 29 saves and led the National League with 55 games finished. He saved a game in both the NLCS and the World Series. After the Nationals' triumph, he was the first player to state publicly that he would decline to make the traditional visit to the White House, citing the President's divisive language, poor treatment of immigrant and refugees and mocking of the handicapped.

He played one more season with the Nats in 2020, but it was a big letdown for him, as it was for most of the team as Washington missed the postseason. He was limited to just 11 games during the shortened season, going 0-2, 5.87 without a save. He became a free agent after the season and on February 2, 2021, signed a one-year deal with the Cincinnati Reds.

As a pitcher, he relies almost exclusively on a fastball timed at 95 mph, which he almost always aims at the top of the strike zone, making it very hard for batters to make solid contact. His brother is Ryan Doolittle.