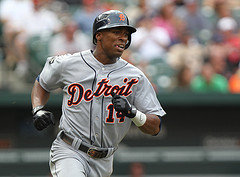 Outfielder Austin Jackson was a top prospect of the New York Yankees before being included in the three-team trade that brought Curtis Granderson from the Detroit Tigers to New York after the 2009 season.

Jackson was signed by the Yankees and scout Mark Batchko as an 8th-round pick in the 2005 amateur draft. He made his pro debut with the GCL Yankees that summer. Jackson made the South Atlantic League All-Star team with the Charleston RiverDogs in 2006, was the MVP of the Eastern League playoffs with the Trenton Thunder in 2008, and was the International League Rookie of the Year and made the All-Star team with the Scranton/Wilkes-Barre Yankees in 2009.

Jackson impressed in his first spring training with the Tigers in 2010 and earned himself a spot in the starting line-up at center field on opening day, where he went 1 for 5 with a double in an 8-4 win over the Kansas City Royals. He hit well over .300 in his first month in the Show, even leading the batting title race for a few days, and blasted his first home run on April 29th off Colby Lewis of the Texas Rangers, a mere 20 miles from his hometown of Denton, TX. He got a scare on May 22nd when he was beaned by Ramon Troncoso of the Los Angeles Dodgers; the ball hit him in the front of the helmet and he went down in a heap. He was removed from the game, but escaped serious trauma by a mere inch or two. He finished second in the Rookie of the Year vote, behind Neftali Feliz of the Texas Rangers after finishing the season with a .293 average in 618 at bats, with 103 runs scored and 27 steals. He was second in the American League with 10 triples but led the loop in strikeouts with 170.

Jackson did lead the American League in triples in 2011, when he hit 11 for the Tigers. Overall, however, his season was not as good as his rookie year, as his batting average fell to .249, his OBP to .317 and his slugging to .374. He lost 13 runs and 12 doubles over the previous season, while playing 2 more games. On the team side, though, the Tigers were an improved team, winning the AL Central title, giving Austin a chance to play in the postseason, He was only 2 for 16 against the New York Yankees in the ALDS, but improved to 6 for 25 with a double and a homer when the Bengals were defeated in 6 games by the Rangers in the ALCS.

Jackson came back very strong for the Tigers in 2012, spending the year among the American League's batting leaders. On August 10th against the Detroit Tigers, he showed off his great speed by hitting a triple and scoring a run in the 4th, then hit an inside-the-park homer in the 7th in a 6 - 2 win. The homer was the first inside-the-parker by a Tigers hitter in five years, while no Tiger had achieved that particular combination since Steve Kemp in 1977. He finished the year at .300/.377/.479 in 137 games, repeating as the AL's leader in triples and scoring 103 runs. In the postseason, he went 5 for 20 with a pair of doubles and 4 runs in the Tigers' win over the Oakland Athletics in the ALDS, then shone against the Yankees in the ALCS, where he picked up 6 hits in 17 at-bats, including a double, a triple and a homer in four games, for a .353 average and a .706 slugging percentage. The Tigers moved on to face the San Francisco Giants in the 2012 World Series; he did manage three hits and four walks in four games, but the Tigers were swept in four games.

In 2013, Jackson was sidelined by an injury in mid-May, missing over a month of action, but otherwise continued to be an offensive and defensive force for the Tigers. He had one of the best games of his career against the Toronto Blue Jays on July 4th, going 4-for-5 with a two-run homer in an 11-1 win. He ended up hitting .272 in 129 games, with 30 doubles, 7 triples and 12 homers. He also went 7 for 22 (.318) in the ALCS as the Tigers lost to the Boston Red Sox. He was having another solid season in 2014, hitting .270 in 99 games, when he was pulled out of a game against the Chicago White Sox on July 31st in the 7th inning after he had gone 2 for 3 in the contest. It was clear that he had been traded, but not immediately to whom. It was the Seattle Mariners who had requested his services, in return for IF Nick Franklin, part of a move by the Tigers to acquire former Cy Young Award winner David Price from the Tampa Bay Rays. he played 54 games for Seattle, hitting only.229 with no homers and 14 RBIs, to finish the season at .256 in 154 games. However, he bounced back in 2015, hitting .272 with 18 doubles, 8 homers and 38 RBIs in 107 games for the Mariners. But Seattle did not compete as expected for a postseason slot, and did not see Jackson as part of its longer-term plans. On August 31st, they sent Austin to the Chicago Cubs in return for a player to be named later. On September 30th, Jackson had a career-high 5 RBIs in a 10-3 win over the Cincinnati Reds. He hit .236 in 29 games for the Cubs, ending up at .267 with 9 homers and 48 RBIs in 136 games for the season. Used mainly as a back-up in the postseason, he went 0 for 8 with a run scored as the Cubs bowed out in the NLCS.

It took Austin some time to find a team for 2016, as he only signed a one-year contract with the Chicago White Sox on March 6th. He played 54 games for the Sox, hitting .254 with no homers and 18 RBIs. His season ended on June 9th, when he tore a ligament in his left knee and did not return. On January 25, 2017, he signed a one-year deal with the Cleveland Indians. He was expected to replace Rajai Davis, a similar player who had left the Indians following their World Series appearance the previous year. On August 1st, he made one of the most spectacular catches ever seen at Fenway Park, when he robbed Hanley Ramirez of the Boston Red Sox of a certain home run. Playing CF, he jumped high against the fence, caught the ball, then tumbled over the railing head-first and fell into the bullpen, holding on to the ball all the way. The catch was so good that Boston fans had no choice but to give him a huge ovation in appreciation of his superhuman effort. He played 85 games with Cleveland, hitting .318 with 7 homers and 35 RBIs. His OPS+ of 126 was his best since 2012 as he saw time at all three outfield positions. He also played in all five games of the Division Series against the New York Yankees, going 3 for 15 with 3 runs.

On January 22, 2018, he signed a two-year deal with the San Francisco Giants with $6 million. He was the third veteran player acquired by the Giants that off-season, after Evan Longoria and Andrew McCutchen, as the team was bidding to turn around a last-place finish in 2017. However, the Giants did not receive the expected production from Austin, as he hit .242 with no power in 59 games. On July 8th, he was traded to the Texas Rangers alongside minor leaguer Jason Bahr and Cory Gearrin in return for future considerations that never materialized, as the objective was to get rid of his contract. He was released by Texas a week later without having played a game for them. On July 27th, the New York Mets signed him as a free agent, but he basically copied what he did in San Francisco, hitting .247 in 57 games, although this time with slightly more power (a slugging percentage of .348, compared to an anemic .298 with the Giants). Still, on the wrong side of 30, it was no longer enough to keep a big league job and no one picked him up after he became a free agent following the season, ending his career.