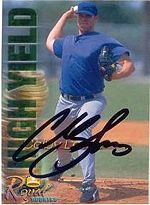 Lewis went 6 years between major league victories between picking up a win on April 7, 2004 and his next one on April 9, 2010. Both came as he was pitching for the Texas Rangers, but in between, he also pitched for the Detroit Tigers and Oakland Athletics, and spent two successful season in Japan, going 26-17 over the 2008 and 2009 seasons. Both times, he led the Central League in strikeouts. Rangers President Nolan Ryan saw a video of Lewis pitching in Japan and was impressed enough to bring him back to the United States in the 2009-10 off-season. He went 12-13, with a 3.72 ERA and pitched over 200 innings in 2010 in a successful return to the majors. He also pitched well in the postseason as the Rangers reached the World Series. He won two games when the Rangers upset the New York Yankees in the ALCS, then was the only Ranger to win a game against the San Francisco Giants in the World Series. Overall, he made 4 starts in the postseason, going 3-0 with a 1.71 ERA.

Lewis continued to pitch well in 2011, once again topping 200 innings and finishing with a record of 14-10, 4.40 in 32 starts. The Rangers returned to the World Series and Colby again did well: he won a game over the Tampa Bay Rays in the ALDS, then after suffering his first career postseason loss in his only ALCS start, pitched well in two games against the St. Louis Cardinals in the World Series. He gave up a run in 6 2/3 innings in Game 2, which Texas won, 2-1, then placed his team in a position to clinch the series in Game 6, leaving after giving up 4 runs - only 2 earned - in 5 1/3 innings on October 27th. However, the Rangers famously blew two late-game two-run leads in that epic context to lose, 10-9, in 11 innings, and then lost the decisive final game the next day.

On May 10, 2012, Colby became the first pitcher in American League history to give up home runs to the first three batters of the game - Ryan Flaherty, J.J. Hardy and Nick Markakis of the Baltimore Orioles. This had been done three times in the National League, with Hardy also being in the middle of things for the last occurrence in 2007, but never in the junior circuit. Lewis had a very unusual pitching line that day: in 7 innings he gave up only 5 hits and a walk while striking out 12, but all five hits were homers, and the one walk, to Matt Wieters, preceded a shot by Wilson Betemit. Adam Jones hit the other long ball, and Lewis was charged with the 6-5 loss. He was only the second starting pitcher to ever allow 5 homers and no other hits in a game while pitching 7 or more innings; Charlie Hough had done so, also for the Rangers, in 1989, and only three more pitchers had ever done so in a start of any length. He went 6-6, 3.43 in 16 starts that season, but his season ended prematurely when the Rangers announced on July 23rd that he needed to undergo surgery for a torn flexor tendon in his right elbow. He had previously been on the disabled list with the same injury from June 24th to July 17th and had only made one start since his return.

An injury completely wiped out his season in 2013, as a bone spur in his right hip prevented him from completing his rehabilitation from the previous year's surgery. He decided to undergo surgery on the hip in August. He was back in spring training with the Rangers in 2014 and returned to the big leagues on April 14th, when he started and lost a game against the Seattle Mariners, 7-1. On July 10th, he had a horrendous start against the Los Angeles Angels, as he gave up 13 runs on as many hits in 2 1/3 innings of work and was charged with a 15-6 loss. On July 19th, he became mad at the Toronto Blue Jays' Colby Rasmus when he bunted successfully down the third base line to beat a defensive shift with his team having a 2-0 lead; Lewis was widely mocked for claiming Rasmus had broken an unwritten rule by bunting in that situation. Most observers noted that in fact, it was a smart play by Rasmus and that more batters should do this to counter the increasing number of shifts being used. He went 10-14, 5.18 in 29 starts, leading the AL in losses while pitching 170 1/3 innings. In 2015, he had his best season in the majors. On September 11th, he pitched 7 perfect innings in a start against the Oakland Athletics before giving up a double to Danny Valencia to lead off the 8th. He then completed the game with two more scoreless innings, for a complete game two-hit shutout and a career-best 15th win. He won his 16th on September 17th, when he defeated the Houston Astros, 8-2, in a game that stretched the Rangers' lead in the AL West to 2 1/2 games. He finished the year at 17-9, 4.66, pitching 204 2/3 innings in 33 starts. However, even though he led the first-place Rangers in wins, innings and strikeouts (142), his only appearance in the postseason came as a reliever in Game 4 of the Division Series against the Toronto Blue Jays on October 12th. He took over for starter Derek Holland after he had put the first two batters on base in the 3rd, and both runners eventually scored, in addition to a third run charged to Colby. The Jays were up 7-0 at that point, and even though he then pitched two more solid innings, the damage had been done as they went on to win, 8-4.

Colby started the 2016 season very strong, as he was 5-0, 3.00 in his first 13 starts. On June 16th, he almost put his name in the history books as he took a no-hitter into the 9th inning against the Oakland A's. With one out, Max Muncy hit a ball to deep right field which RF Nomar Mazara briefly had in his glove before running into the fence and dropping for a double. He then gave up an RBI double to Coco Crisp, but finished the game and received credit for his team's 5-1 win. He had lost his bid for a perfect game with a two-out walk to Yonder Alonso in the 8th. Shortly after that start, however, on June 22nd, he was placed on the disabled list with a strained lateral muscle, forcing him to miss two months of the season. His next appearance came on September 11th and he lost all four of his starts during that month to finish at 6-5, 3.71. His ERA in September was 6.38, but still, he was given the ball to start Game 3 of the ALDS against the Blue Jays at Rogers Centre on October 9th, but things did not go well as he gave up 5 runs in 2 innings, including homers by Edwin Encarnacion and Russell Martin in the 1st inning as he put the Rangers in a quick hole before they eventually lost the game in extra innings to be eliminated from postseason contention.

Lewis became a free agent after the 2016 season, but the Rangers were only willing to offer him a minor league contract which he declined. As spring training opened, he sent a message to Rangers fans thanking them for their support over the years. While he did not officially announce his retirement at that point, it was clear that if he had not reached the end of the line as a player, he was getting pretty close. After the season, he confirmed his retirement by joining the Rangers' front office as an assistant to General manager Jon Daniels.