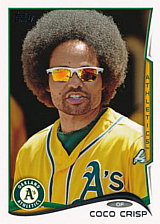 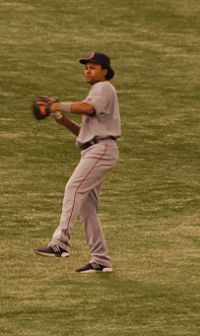 He was not always known as Coco. Born Covelli Loyce Crisp, he was first nicknamed "Coco" by his sister in his youth. He attended high school, junior college and advanced all the way to Double A in the St. Louis Cardinals system (7th rounder in 1999) before the tag officially stuck. While filling out a questionnaire circulated among the New Haven Ravens of the Eastern League, Crisp decided to list "Coco" as a nickname on the form. Naturally, these questionnaires were never intended to be kept secret and word spread around the team fast. During a game, the Ravens listed Crisp as Coco Crisp on the scoreboard. The tag stuck; so well, in fact, that Crisp legally changed his name in March 2013.

Before he could become Coco on a national stage, there would be a trade. He was the reigning Cardinals Minor League Player of the Year (.306/.368/.423 with 39 steals and 80 runs scored for the 2001 Potomac Cannons of the South Atlantic League) and acquitting himself quite nicely with the Ravens (.301/.365/.428, 26 steals, 61 runs scored in 89 games) when he was sent to the Cleveland Indians as a player to be named later from a prior swap involving Chuck Finley. After only 11 games in the Indian system, Coco had reached the big league promised land, gradually earning a starting job in center field while batting .260/.314/.386 in a 32-game look.

Upon the move to Massachusetts, Crisp got PAID to the tune of a three-year, $15.5 million extension. In his fifth game with the Sox, he broke a finger attempting to steal a base against the Baltimore Orioles. His production cratered, understandably, due to the layoff, batting .264/.317/.385 with 8 homers in 105 games. The next season, 2007 went a fair bit better. Though his offense did not match his 2004-2005 level of productivity, he was able to keep men off the basepaths due to his scintillating defensive skills. On August 5th of the championship season, Crisp nearly was the victim of an accidental hit-and-run by the Mariner Moose, cruising around the field on an ATV to get all the kiddies and families to bop with his antics. Thankfully, no one was injured. Crisp made the grab in Game 7 of the ALCS that sent Boston back to the World Series for the second time in four years. He was more of a spectator at this point, winning a ring while being usurped by rookie sensation (and the first ever Taco Bell 'Steal A Base, Steal A Taco' hero) Jacoby Ellsbury, whose bat was simply better.

There would be one more season for Crisp in Boston, with a .283/.344/.407 line in 118 games in 2008. The year was full of a lot of ill will towards the Tampa Bay Rays. On June 4th at Fenway Park, Crisp was blocked off second base on a steal attempt by Jason Bartlett and a well-placed knee. Coco did not take kindly to this shabby 6th-inning treatment. Two innings later, he was on base again and came into second hot. Bartlett, his intended target, conveniently did not cover. Instead, poor Akinori Iwamura got leveled. Rays manager Joe Maddon and Crisp argued during a subsequent pitching change, but ultimately nothing happened. Until the following day, of course. James Shields took the law into his hands when Coco came to bat on June 5th, drilling him in the thigh with a heater. Mayhem ensued. Crisp dodged a Shields punch and caught him with a glancing blow as benches cleared. Served with a seven-game suspension, he appealed it down to five. He got a measure of revenge in the ALCS, a game-tying hit to complete a 7-run comeback against the Rays in Game 5. Sadly for him and for Boston fans, Tampa won in seven.

In the ensuing off-season, Crisp was moved to the Kansas City Royals. The season was a disastrous 49-game effort (.228/.336/.378) in which he underwent surgery on both of his labrums in June. He took a challenge deal from the Oakland Athletics in 2010, playing 75 games while missing time with a fractured pinkie finger. He returned from mostly spectating with a strong 2011. Coco led the AL in stolen bases, swiping 49 bags, while belting 27 doubles and 8 home runs in 136 games. He re-signed for 2012 and saw his power turning back on, hitting .259/.325/.418 with 11 home runs in 120 games.

Coco's 2013 season was his last great season. He hit .261/.335/.444 with career highs in home runs (22) and runs scored (93), driving in 66 runs. He signed a three-year extension with Oakland on the heels of this, including a vesting fourth year option dependent upon games played. But the deal would encompass his last three seasons as a big leaguer. He played 126 times in 2014 and returned to his standard levels of production. Then he regressed terribly in 2015 while battling kidney stones, only hitting .175/.275/.222 in 44 games. Believing the A's were deliberately limiting his playing time in 2016, he agreed to waive an agreed-upon no-trade clause to return to Cleveland for the stretch drive. He belted a game-winning home run during Game 3 of the ALDS against another former team, the Red Sox, and appeared in six of the seven World Series games, batting .333/.385/.500 as the Indians fell to the Chicago Cubs. When his contract did not vest a fourth year and with no offers forthcoming, he walked away in 2017.

In a fifteen-year career, Coco was definitively the anti Ron Hunt: in over 6,600 plate appearances, he was only hit-by-pitch 5 times, the lowest rate in history. Part of this was that he was particularly good at getting out of the way of a pitch headed towards him, but mostly it was because the book on him was that he was vulnerable to pitches over the outside part of the plate, and that is where opposing pitchers would always throw. Also, as a switch-hitter, he never got to face a same-handed pitcher, so the natural break of the ball was always headed away from his body, not towards it. Apart from evading the path of a speeding baseball, Crisp was a strong base runner (309 career steals) and a good defender with a not-so-great throwing arm.

With his playing days behind him, Coco became the baseball coach at Shadow Hills High School in Indio, CA. In 2019, he joined the radio broadcast team of the Oakland Athletics.