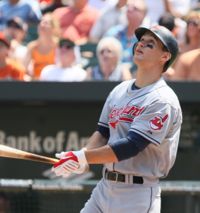 Grady Sizemore was labelled a future star from the time he was drafted by the Montreal Expos in the 3rd round of the 2000 amateur draft out of Cascade High School in Everett, WA. He was considered to be a first-round talent, but teams shied away from drafting him higher as he was expected to be headed for college.

He was traded to the Cleveland Indians on June 27, 2002 in what turned out to be a lopsided deal. With the Expos apparently headed for contraction, GM Omar Minaya took a gamble at making a heroic run for a pennant by trading away a number of prospects in return for established players who could give the team an immediate boost. Thus in one of a number of deals, Minaya sent three minor leaguers - Sizemore, pitcher Cliff Lee and infielder Brandon Phillips - to the Indians in return for P Bartolo Colon ( a couple of less important players were also involved in the trade). Colon did win 10 games over the second half of the year, but the Expos finished well out of the postseason and all three youngsters that the Indians acquired, including Sizemore, would develop into multiple-time All-Stars.

At his peak, Sizemore was a man could seemingly do it all on a baseball field: hit for a decent average, with very good power, particularly for doubles (he led the American league with 53 in 2006); gifted with great speed, he was a Gold Glove centerfielder who routinely scored over 100 runs a season and stole up to 38 bases; he also had an excellent batting eye, drawing as many as 101 walks in 2007. He made the American League All-Star team in 2006, 2007 and 2008. He was at his best in the ALDS against the New York Yankees in 2007, leading the Tribe to an upset with a 6-for-16 performance, with 4 walks, a triple and a homer; he added three more extra-base hits and scored 6 runs in the 2007 ALCS agaisnt the Boston Red Sox, but the Indians were eliminated in seven games.

After being one of baseball's most durable players from 2005 to 2008, Sizemore caught the injury bug beginning in the 2009 season. He played only 106 games that year, with a poor batting line of .248/.343/.445, then in 2010 was limited to 33 contests, during which he batted only .211. In 2011, he made three trips to the disabled list, was limited to 71 games, and hit .224 with 10 homers, 32 RBI and 34 runs scored. For the first time in his career, he did not register a single stolen base. He ended the year by undergoing knee surgery on October 3rd. Things continued to go badly in 2012, as on March 1st he had to undergo a "minimally invasive" lower back procedure in Miami, FL, his fifth operation in two years. That immediately set him back for 8 to 12 weeks, and in the end, he missed the entire season and all of 2012 as well for good measure.

Having become an afterthought in most observers' minds, Sizemore signed a minor league contract with the Boston Red Sox heading into 2014. there was an opportunity for him to contribute, given starting centerfielder Jacoby Ellsbury had left via the free agent market, and his penciled -in replacement, Jackie Bradley, still had to prove he was ready to handle a major league starting job. Still only 31, Sizemore showed up in spring training in good health an with his hitting ability seemingly intact; soon, he had the Red Sox brass thinking about making him the regular in the outfield in order to ease the pressure on the young Bradley. Indeed, Grady was starting in centerfield when Boston opened its season against the Baltimore Orioles on March 31st for his first regular season game since 2011. His three-year absence from the diamond proved too much to overcome, however, and his unlikely comeback fairy-tale came to a relatively quick end. By the middle of June he was hitting only .216 in 52 games with an OPS+ of 69 and on June 17th, he was designated for assignment as Shane Victorino was about to come off the disabled list. He signed with the Philadelphia Phillies a few days later and was assigned to the Lehigh Valley IronPigs of the AAA International League. He played only 10 games with Lehigh Valley, hitting .289, before getting called up to Philadelphia on July 10th. He then hit .253 in 60 games for Philly, with 3 homers and 12 RBIs. He returned to the Phillies at the start of the 2015 season, but after 39 games of hitting .245 with no homers and 6 RBIs, he was designated for assignment on May 30th, as the Phillies, going nowhere once again, wanted to open his roster spot for a younger player. On June 15th, he signed a minor league contract with the Tampa Bay Rays. He played 58 games for the Rays, hitting .257 with 6 homers and 27 RBIs, good for an OPS+ of 107. He became a free agent again after the season, but no team was willing to offer him a contract and his career ended.