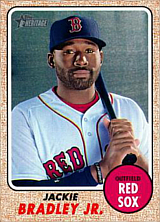 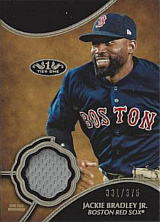 Jackie Bradley, usually referred to as Jackie Bradley Jr., was named the College World Series Most Outstanding Player in 2010. He has been a solid staple of the Boston Red Sox outfield since 2013.

As a high school senior, Bradley was All-State. As a freshman at South Carolina, he hit .349/.431/.537 with 69 runs scored in 63 games and was a consensus Freshman All-American. That summer, he batted .275/.351/.366 for the Hyannis Mets of the elite Cape Cod League, leading the loop with four triples. His sophomore year, 2010, Bradley improved to .368/.473/.587 with 13 homers, 56 runs scored and 60 RBI in 67 games while making only one error all year. He made second-team All-SEC in the outfield. He went 10 for 29 with two homers and 9 RBI in the 2010 College World Series to lead South Carolina to its first title and had three hits when South Carolina knocked off #1-ranked Arizona State from the Series. In the finale, he caught a Brett Krill liner at the warning track in the 11th inning. He was named the Most Outstanding Player in the CWS for his efforts.

Bradley was selected by the Boston Red Sox with the 40th pick of the 2011 amateur draft, a compensation pick as a result of third baseman Adrian Beltre signing with the Texas Rangers as a free agent. Scouted by Quincy Boyd, he was signed for a reported $1.1 million. He made his pro debut that summer with the Lowell Spinners and the Greenville Drive, hitting .250 with a home run in 10 games between the two clubs. He split 2012 between the Class A Salem Red Sox, where he hit .359 in 67 games, and the AA Portland Sea Dogs, where he hit .271. Between the two stops, his batting line was .315/.430/.482 with 42 doubles, 9 homers, 90 runs scored and 63 RBI. He also drew 87 walks.

Bradley went to spring training with the Red Sox as a non-roster player in 2013 and was outstanding, hitting over .400 and displaying a great approach at the plate that put him in the picture to begin the season in Boston. He was the Red Sox's starter in left field on Opening Day against the New York Yankees at New Yankee Stadium on April 1st, going 0 for 2, but with three walks, two runs scored and an RBI as Boston won handily, 8-2. The Red Sox started the season playing very well, finding themselves atop the AL East after two weeks, but Bradley was not hitting, having gone 3 for 31 in his first 12 games, and spending increasing time on the bench. With David Ortiz ready to come off the disabled list, the Sox decided to send Bradley to the AAA Pawtucket Red Sox on April 19th, in order to give him regular playing time. Unfazed by his struggles at the big league level, Bradley quickly found his stroke with Pawtucket, and had his average up to .354 after 20 games, at which point, Boston called him back on May 29th. He still could not master major league pitching and finished with an average of .189 in 37 games. He was not included on the roster when the Sawx won the World Series.

In 2014, Bradley got an extended shot at being the Red Sox's starting center fielder, but he again struggled at the plate. In 127 games, he failed to make it above the Mendoza Line, ending the year with a batting average of .197. It was not as if he was compensating for the low average with other facets of his game: his OBP was .265 and his slugging percentage an anemic .266, with 19 doubles but only 2 triples and a homer, for an OPS+ of 50, making him one of the least productive regulars in the majors. He lost his job to converted infielder Mookie Betts towards the end of the year. He was back with Pawtucket for most of 2015, where he hit a solid .305/.382/.472 in 71 games. He continued to struggle against major league pitching during three separate stints with the big league club. On August 9th, he was hitting only .121 with one extra-base hit - a homer - in 28 games when he broke out for a 2 for 3 game in which he had a triple, a homer and 5 RBI to lead Boston to a 7-2 win over the Detroit Tigers and give top pitching prospect Henry Owens his maiden big league victory. That started a hot streak which culminated in a game for the ages on August 15th, as he went 5 for 6 with 3 doubles, 2 homers, 5 runs scored and 7 RBI to lead Boston to a 22-10 win over the Seattle Mariners. He was the first player in Red Sox history to have five extra-base hits in one game, doing so from the 9th slot in the lineup. Playing every day, he managed to raise his average to .312 with a 4-for-4 game against the Toronto Blue Jays in which he hit his 8th homer of the year on September 7th. He then went into a 1-for-32 slump before breaking out in spectacular fashion on September 19th with a game-tying double in the 7th and a two-run homer off closer Roberto Osuna in the 9th as Boston defeated Toronto, 7-6. He ended the season at .249 in 74 games, with 17 doubles, 4 triples and 10 homers for a .498 slugging percentage and an OPS+ of 119, putting him back in the center of the team's future plans.

Bradley started 2016 where he left off the previous season, as he was the hottest hitter in the majors in May. On May 18th, he homered in his first at-bat of the second game of a day-night doubleheader against the Kansas City Royals to extend his hitting streak to 24 games, the longest in the majors that season. His batting average was now .338, and he had hit 7 doubles, 3 triples and 7 homers during the stretch. He made it 25 games when he homered off Corey Kluber of the Cleveland Indians in the 2nd inning on May 20th; it also marked the 20th straight game in which the Red Sox hit a homer, breaking a team record dating back to 1996. The hitting streak ended at 29 games on May 26th, when he went 0 for 4 in an 8-2 loss to the Colorado Rockies, at which point he passed the baton for the longest extant streak to his teammate Xander Bogaerts, who had hit safely in 19 games. He was named the American League Player of the Month for May, having hit .381 with 7 doubles, 8 homers and 24 RBI in 27 games during the month. He cooled down after that, but still made the All-Star team for the first time and set personal bests with 156 games, 30 doubles, 7 triples, 26 homers, 94 runs and 87 RBI. He also batted .267 and played excellent defense in center field as Boston won a division title. In his first postseason appearance, he went 1 for 10 in the ALDS against the Cleveland Indians.

In 2017 Bradley's production fell back to some extent, especially his extra base hits, and he was generally batting from the bottom of the batting order. Still, his excellent defensive play was unabated, and he continued to be a quality player if no longer performing at an All-Star level. On August 22nd, he sprained his thumb while sliding into home plate and was immediately placed on the disabled list. The Red Sox made a trade to acquire veteran center fielder Rajai Davis from the Oakland Athletics the next day. Jackie was able to come back by early September, and played regularly the rest of the way to finish the year at .245 in 133 games, with 17 homers and 63 RBI. In the Division Series, he was 3 for 15 with a homer and 5 RBI as the Sox were defeated in four games by the Houston Astros. He had another subpar season with the bat in 2018, but otherwise it was a memorable one. He hit .234 in 144 games with 13 homers and 59 RBI, good for an OPS+ of 89, but his defense in center field was stellar, earning him his first Gold Glove. Others on the team, most notably Betts, Bogaerts and new acquisition J.D. Martinez, supplied the base hits while he was busy taking them away, and the Red Sox had one of their best seasons ever. In the postseason, he was the MVP of the 2018 ALCS, which Boston won in five games over the Astros, by driving in 9 runs even though he had just 3 hits: all three were well-timed and went for extra bases, quality clearly trumping quantity in this instance. He had three more hits, including a homer, in 13 at-bats in the 2018 World Series, which Boston won in five games over the Los Angeles Dodgers.

Bradley started slow with the bat in 2019, as he hit just .148 in 26 games in March and April with no homers and 5 RBI. His defensive play remained superlative. On May 8th, he robbed Trey Mancini of the Baltimore Orioles of what would have been a walk-off homer in the 11th inning by leaping over the center field fence at Oriole Park at Camden Yards and catching the ball a good two feet above it. The Sox went on win the game, 2-1, in 12 innings thanks to his amazing catch. That win put the team back at .500 after a very tough first few weeks when they were as many as 7 games below .500. His bat remained tepid, finishing .225 with 21 homers and 62 RBI, while his glove enabled him to lead all center fielders in assists with 10.