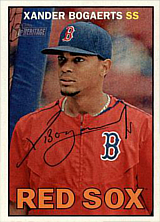 Xander Bogaerts reached the majors in 2013 at age 20. His twin brother, Jair Bogaerts, has played professionally.

He joined the Dutch national team for the 2011 Baseball World Cup. In the Netherlands' historic run to the Gold Medal, he got into three games as the backup shortstop behind another minor league prospect, Didi Gregorius. Bogaerts went 0 for 2 with a walk and a run after replacing Gregorius in a 19-0 romp of Greece. Replacing Bryan Engelhardt as DH in a 5-4 loss to Team Canada, he was 0 for 2 with a walk and a RBI. His bases-loaded walk from Mark Hardy in the 7th forced in Gregorius with the tying run to make it 3-3. With a 4-4 tie in the 10th, two on and two out, he was retired by Jimmy Henderson. His only start came in a 12-2 win over Venezuela, going 2 for 4 with a run and a RBI as the shortstop. In the Gold Medal game, the Netherlands only used Gregorius at shortstop.

He started the 2012 season with the Salem Red Sox of the Carolina League, where he hit .302/.378/.505 in 104 games. He was promoted to the Portland Sea Dogs of the AA Eastern League in early August, and hit .326/.351/.598 in 23 games against the higher level of competition. He was selected to play for the World Team in the 2012 Futures Game, hitting 5th and playing DH. He struck out against Gerrit Cole in the second, singled off Danny Hultzen in the third, whiffed versus Tyler Skaggs in the 5th and grounded out against Alex Meyer in the 8th. Xander was named the Carolina League Player of the Year by Topps (Dan Black was the league MVP), the Carolina League All-Star shortstop and was named the Red Sox Minor League Player of the Year. Between the two clubs, his batting line read .307/.373/.523 in 127 games, with 37 doubles, 3 triples, 20 homers and 81 RBI. He tied Keury De La Cruz for second in the Red Sox chain in home runs (behind Mauro Gomez) and for 4th in average and was third in RBI (behind De La Cruz and Travis Shaw). In the Carolina League, he was 4th in average, 4th in OBP and second to Shaw in slugging. Baseball America ranked him the top Red Sox prospect, the #8 prospect in baseball and #2 in the Carolina League (between Dylan Bundy and Matt Barnes). They also listed him Boston's best power prospect and best athlete. He went to training camp with the Red Sox as their youngest player the next spring.

He was a member of the Netherlands national team at the 2013 World Baseball Classic; this time, he started for them, replacing the injured Yurendell De Caster at third base early in the tournament (Andrelton Simmons manned short, Bogaerts' usual spot). He went 5 for 19 with two doubles, three walks, a run and a RBI in 7 games as the Netherlands surprisingly made it to the semifinals. In the semifinal 4-1 loss to eventual champion Dominican national team, Bogaerts was back on the bench, with Schoop starting at third and Simmons at short; Schoop had been playing second until then but Xander lost his spot when another top minor league prospect, Jurickson Profar, was added for the final round.

He began the 2013 season at Portland, where he hit .311/.407/.502 in 56 games. He was selected to play for the World Team in the 2013 Futures Game, his second appearance in the showcase. This time, he got two of the three World hits as their top batter. Playing shortstop and hitting third for the World, he singled off Noah Syndergaard with two outs in the first. With Miguel Sano at the plate, Bogaerts was caught stealing second by Austin Hedges. In the 4th, he singled off Anthony Ranaudo for the final World hit. He took second on a wild pitch, third on a grounder by Henry Urrutia and scored on a sacrifice fly by Jordan Lennerton to make it 2-1, World; the US would score three unanswered runs after that. Bogaerts struck out facing Eddie Butler in the 6th then walked against Kyle Crick in the 9th.

After playing a few games for the AAA Pawtucket Red Sox in April, he moved up for good in mid-June and continued to hit the ball with authority while also seeing his first minor league action at third base (he had played shortstop exclusively outside of the Dutch national team until then), in preparation for the expected needs of the big league club. In 60 games at Pawtucket, his batting line stood at .284/.369/.453; between the two minor league stops, he had accumulated 23 doubles, 6 triples and 15 homers in 116 games before getting the call to Boston on August 19th, a couple of weeks after the Red Sox had traded another top shortstop prospect, José Iglesias, in recognition that Bogaerts was the real deal. His performance earned him the USA Today Minor League Player of the Year Award. He sat on the bench his first day in Boston, but was in the starting lineup at shortstop on August 20th at AT&T Park, home of the San Francisco Giants. Hitting 7th and playing shortstop, he went 0 for 3 with a strikeout as the Sox lost, 3-2. He grounded out against Ryan Vogelsong in his first major league at bat, grounded out again in the third and whiffed in the 6th. He was replaced by Stephen Drew in a double switch in the bottom of the sixth. He was the first Aruban to play for the Red Sox. His first major league hit came on August 24th, a 9th-inning single off Brandon League of the Los Angeles Dodgers after coming into that game in another double switch. He hit his first career homer on September 7th, a two-run blast off the New York Yankees' Jim Miller that left no doubt as to its final destination as soon as it left his bat. While he played relatively sparingly the rest of the way, going 11 for 44 in 18 games, he became a starter during the postseason, replacing Will Middlebrooks at third base as the latter was slumping in the ALCS. Bogaerts showed excellent plate discipline and a live bat to keep the job. When Xander hit a triple in Game 3 of the 2013 World Series against Joe Kelly of the Cardinals, he became the third youngest player to have a three-base hit in the history of the Fall Classic, after Ty Cobb and Mickey Mantle. As Tim McCarver commented: "Anytime your name is mentioned in the same sentence as Cobb and Mantle, that's a good thing." He was 5 for 21 with the triple, two runs, two RBI, a walk and eight whiffs in the Series, which Boston won.

In 2014, with Drew unsigned at the start of the season, he began the season as the starting shortstop. He moved to third base in place of a struggling Middlebrooks when Drew re-joined the team in June after his contract holdout, then came back to shortstop when Drew was traded away at the end of July. In the end, he played 144 games, hitting .240 with 28 doubles and 12 homers, scoring 60 runs and driving in 46. This was decent production for a middle infielder, and he was only 21, an age at which most players are still earning their stripes in the lower minors, but with Boston falling back to last place and his striking out 138 times, he took his share of criticism for not immediately putting up superstar numbers. He put up good defensive numbers at shortstop, making 10 errors in 99 games, but things were tougher at third, where his fielding percentage was only .910. He continued to progress in 2015, even though he seemed to stop hitting homers; his batting average rose significantly and he became one of the team's most productive hitters with runners in scoring position, forcing manager John Farrell to move him up in the lineup after spending most of 2014 hitting 8th or 9th. On August 15th, he was one of the major contributors to a 22-10 win over the Seattle Mariners, with 4 hits and 2 RBI. In his breakout season, he hit .320 in 156 games, with 196 hits, the second highest total in the American League. Because he did not draw many walks (only 32, against 101 strikeouts) and most of his hits were singles, his OPS+ was only 107, but at 22, he confirmed that he had a very bright future. He was named the recipient of the Silver Slugger Award as the best-hitting shortstop in the AL after the season.

He took off in 2016 where he had let off the previous year, hitting well over .300 and leading the AL in hits the first couple of months. He and Jackie Bradley were the offensive leaders on a resurgent Red Sox team. In May, they put together simultaneous hitting streaks, with Bradley's having reached 29 games when he was stopped on May 26th, at which point Bogaerts pushed his own streak to 19 games. It eventually reached 26 games before it was stopped on June 3rd. He hit .294 in 157 games, with 34 doubles and 21 homers, scoring 115 runs and driving in 89. He made the All-Star team for the first time and repeated as winner of the Silver Slugger Award as the Red Sox won a division title. He was then limited to 3 hits, all singles, in 12 at-bats in the ALDS as Boston was swept by the Cleveland Indians. After emerging as a power threat in 2016, Xander only hit 2 homers over the first two and half months of 2017, then on June 18th had the first multi-homer game of his career when he went 3-for-4 with 4 RBI in a 6-5 win over the Houston Astros. Both homers were off Joe Musgrove. He hit .273 in 148 games, but with just 10 homers and 62 RBI. His runs scored also dropped, to 94. He went just 1 for 14 in the ALDS against the Astros, his only hit being a homer.

He started the 2018 season red hot, collecting 8 hits over his first 3 games, including three-hit games on Opening Day, March 29th, and again on March 31st. He was not just hitting singles either, as he collected 5 doubles and a homer during the hot streak. On April 7th, he hit a grand slam and collected 6 RBI in a 10-3 win over the Tampa Bay Rays, for the Red Sox's seventh straight win after losing on Opening Day. The following day, he injured his ankle while sliding into the Rays' dugout while trying to chase an errant throw from the outfield and was placed on the disabled list with a cracked bone in his left ankle. He came back on April 27th and three days later concluded the month with his second grand slam of the season, this one off Jason Hammel of the Kansas City Royals. It was the 6th grand slam by a Red Sox hitter that month, tying a record set by the 1996 Montreal Expos. On July 14th, he hit another grand slam, this one of the walk-off variety in the 10th inning off Chris Rowley of the Toronto Blue Jays for a 6-2 win. He ended the season at .288 with 23 homers and 103 RBI in 136 games, setting personal bests for both homers and RBI in spite of playing fewer games than in any season since his first call up in 2013. The Red Sox had the best record in the AL and breezed through the postseason, defeating the Los Angeles Dodgers in the World Series. Xander had a total of 13 hits in the 14 games played by the Sox, with 7 RBI.

On March 31, 2019, the Red Sox signed him to a seven-year extension, including the current season, worth $132 million. This came on the heels of signing ace pitcher Chris Sale to a similar deal. It was another stellar campaign for him, finishing the season with a .309 average, 33 homers and 117 RBI. He made his second All-Star Game appearance and finished 5th in American League Most Valuable Player voting.