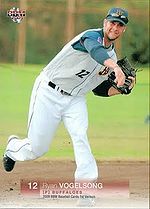 Ryan Vogelsong is a pitcher who spent 2000 with the Hanshin Tigers. He pitched for nine years in the San Francisco Giants and Pittsburgh Pirates organizations before heading to Japan, then became an unexpected All-Star after returning to the U.S.

In 1998, Vogelsong had a 1.41 ERA, leading NCAA Division II. Ryan was taken by the Giants in the 5th round of the 1998 amateur draft. He debuted with the Salem-Keizer Volcanoes and was impressive, going 6-1 with a 1.77 ERA. He struck out 68 and allowed 37 hits in 56 IP over 10 starts. With the San Jose Giants, he had a 7.58 ERA in four starts, allowing 23 hits but only 4 walks in 19 innings and striking out 26. He was five innings shy of claiming the Northwest League ERA title.

On July 31, San Francisco dealt Vogelsong with Armando Rios to the Pittsburgh Pirates for Jason Schmidt and John Vander Wal. In retrospect, the trade would be a horrible one for Pittsburgh as Schmidt blossomed in San Fran and Vogelsong never developed to be a good major league pitcher. At the time, it was felt by many to be a fair trade of pitching prospects, neither of whom had not panned out in the majors yet.

Vogelsong was 2-3 with a 3.98 ERA and over a strikeout per inning in 6 starts with the Nashville Sounds then was 0-2 with a 12.00 ERA in two starts for the 2001 Pirates. Baseball America ranked Vogelsong the #7 prospect in the Pirates organization. Ryan suffered an injury in his second game in Pittsburgh and had Tommy John surgery by Dr. James Andrews that cut short his season and limited his playing time in 2002.

Returning to pitch halfway into the 2002 season, Ryan struggled in two stints (1-1, 8.04 for the Lynchburg Hillcats and 1-5, 5.56 for the Altoona Curve) despite continuing to strike out batters regularly.

Vogelsong spent most of 2003 back in Nashville, where he went 12-8 with a 4.29 ERA. He did strike out 146 to lead the Pirates farm system and he was only two shy of Pacific Coast League leader Dennis Tankersley. Vogelsong struggled in six games with the 2003 Pirates, going 2-2 with a 6.55 ERA.

Moved to the bullpen as a long reliever, Vogelsong had a decent season with the 2005 Pirates, going 2-2 with a 4.43 ERA; his 97 ERA+ was the best of his major league career.

Vogelsong signed a minor league contract with the Los Angeles Angels of Anaheim on July 28, 2010. In 2011, he signed a minor league contract to return to the San Francisco Giants with an invitation to spring training. On April 17, 2011, he had his contract purchased by the Giants to replace the injured Barry Zito. On April 18th, he pitched in the big leagues for the first time since June 22, 2006. He pitched so well filling in as the Giants' fifth starter that he made the All-Star team. When Zito was ready to come back in late June, Vogelsong caught another break when Jonathan Sanchez had to go on the disabled list, meaning he would not be asked to give up his spot, although the way Ryan had been pitching, the Giants were considering moving to a six-man starting rotation if all of their pitchers were healthy at the same time. Vogelsong became only the third non-Japanese player to go from NPB to the major league All-Star Game, following Cecil Fielder and Alfonso Soriano. Interestingly, none of the three had been an All-Star in Japan. He finished the season with a solid record of 13-7, 2.71, with 139 strikeouts in 179 2/3 innings. He recorded his first major league complete game and shutout on May 14th in a 3-0 win over the Chicago Cubs, although that game was shortened to six innings by rain.

Vogelsong proved that 2011 was not a one-year blip by continuing to pitch well in 2012. He was leading the National League with a 2.27 ERA when he ran into a buzz-saw on August 13th. Facing the Washington Nationals, he gave up 8 runs on 9 hits in 2 2/3 innings as the Giants lost, 14-2. He had not pitched fewer than six innings in any of his previous starts that season, and had not allowed more than two runs in any of his 11 previous home starts. His record fell to 10-6 as his ERA climbed to 2.72, now only fourth-best in the circuit. Still, he finished the year with a record of 14-9, 3.37 as the Giants won the NL West title. He made his first career postseason appearance in Game 3 of the NLDS on October 9th, facing the Cincinnati Reds on the road with the Giants down two games to none. He pitched very well, giving up a run on 3 hits in 5 innings, and the Giants eventually won the game in extra innings, 2-1, and then came back to eliminate the Reds. Ryan won two games in the NLCS. Facing Chris Carpenter in both Game 2 and Game 6, he gave up 1 run in 7 innings both times, also striking out a career-high 9 batters in his second start. He was again excellent in Game 3 of the 2012 World Series facing the Detroit Tigers, when he held his opponents scoreless in 5 2/3 innings before giving way to Tim Lincecum; he was credited with the Giants' 2-0 win.

Vogelsong was one of the starters for Team USA in the 2013 World Baseball Classic; after being the winner against the Italian national team in the opening round, he pitched well in a do-or-die game in the second round against Puerto Rico on March 15th, but the two runs he gave up in 5 2/3 innings were enough to saddle him with a 4-3 loss to Nelson Figueroa that eliminated the United States from the tournament. The charm that had carried him through the previous two seasons seemed to be broken in 2013 however, as he started the year 1-4, 8.06, in his first 8 starts. He had the highest ERA among National League starters at that point, but manager Bruce Bochy insisted that he would continue to start, as he had done enough for him over the previous two years to warrant being given a chance to work out his troubles. Vogelsong responded with his best start of the year on May 20th, but unfortunately, after pitching five shutout innings against the Washington Nationals, he broke a finger in his right hand while batting in the bottom of the inning; he was credited with the 8-0 win but had to undergo surgery, and did not return until August 9th. His ERA stood at 7.19 before the injury, but he pitched a bit better after his return, going 2-2, 4.45, in 10 starts to finish at 4-6, 5.73. The Giants declined to exercise his option after the season, but still re-signed him for one year on November 29th, as his poor year had ended up costing him a chunk of potential salary.

Vogelsong was healthy again and taking his regular turn in the Giants' starting rotation in 2014, although wins were hard to come by. On August 1st, however, he pitched a magnificent complete game two-hitter in defeating the New York Mets, 5-1. He faced only one batter over the minimum and recorded only his second career complete game - and his first to actually go the full nine innings; the only blemish was a solo homer by Lucas Duda in the 8th. He finished the year with a record of 8-13, 4.00 in 32 starts, pitching 184 2/3 innings. He made four appearances, including three starts in the Giants' run to a third World Series title in five years, but did not have a decision. In both the NLCS and the Series, he was roughed up, by the St. Louis Cardinals and Kansas City Royals respectively, with ERAs of 12.00 and 9.82. He returned for a final season with the Giants in 2015, during which he made 22 starts in 33 appearances, ending up with a record of 9-11, 4.67. He struck out 108 in 135 innings. The highlight of his season was hitting his first career homer, a two-run shot off Chris Rusin of the Colorado Rockies with Juan Perez on second base on September 3rd.

He became a free agent after the season, and on December 18th rejoined the other team for which he had played in the majors, the Pittsburgh Pirates, on a one-year deal, a decade after last pitching for them. Pittsburgh was looking for pitching depth after the retirement of A.J. Burnett, the loss of J.A. Happ to free agency and trading away Charlie Morton. On May 23, 2016, he was hit in the head by a 92 mph fastball thrown by Jordan Lyles of the Rockies and had to be hospitalized with swelling and multiple facial fractures. He underwent surgery the repair the damage on June 2nd. he returned to the mound on August 4th, making a start against the Atlanta Braves It was probably his best performance of the year, as he pitched six innings and allowed only one run, ending up with a no-decision as Pittsburgh eventually lost the game, 5-2. He ended the year at 3-7, 4.81 in 24 games. He went to spring training with the Minnesota Twins in 2017 but retired after failing to make the team out of spring training.