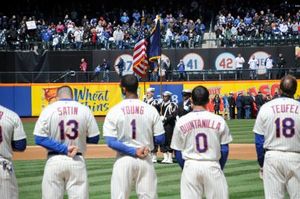 The 2014 New York Mets had a tough first series against the Washington Nationals. Closer Bobby Parnell blew a 9th-inning lead on Opening Day on March 31st and the Mets lost, 9-7, in 10 innings. After the game Parnell went on the disabled list with an elbow injury and had to undergo Tommy John surgery, ending his season after only one appearance. Off-season acquisition Chris Young, who started the opener in CF, lasted only one inning before leaving the game with a strained quadriceps and going on the DL too. The Mets lost their second game, 5-1, on April 2nd as Gio Gonzalez homered and won the game. Their hitters struck out 18 times in the opener and 13 in the second, for a total of 31, the most ever by a team after two games (the hapless Houston Astros had set the previous record of 28 whiffs a year earlier). They also lost the next day, 8-2, even though one of their brightest young starts, P Zack Wheeler, was facing an emergency starter in Tanner Roark; Wheeler did all right, giving up 3 runs in 6 innings, but the bullpen then blew the game wide open. It was the first time the Mets had lost their first three home dates since 1997, and they had looked so awful doing so that the press vultures were already circling around the team.

The Mets managed to regroup after that tough start, even though OF Juan Lagares hit the disabled list just as Chris Young was about to come off. Reclamation project Jose Valverde was anything but shut-down as he took over for Parnell as closer, but did pick up a win and a pair of saves over the next two weeks. The Mets made it to .500 (7-7) with a 9-0 win over the Atlanta Braves on April 15th, then on April 21st were above the mark for the first time at 10-9 thanks to a 2-0 win over the St. Louis Cardinals. The winner in both games was Jenrry Mejia, who after years of injuries was finally pitching like the top prospect who was the youngest player in the majors when he had made his debut back in 2010. But the Mets were anything but young, as grizzled veteran newcomers such as Kyle Farnsworth (38), Bartolo Colon (41) and Daisuke Matsuzaka (33), in addition to the 36-year-old Valverde, were given prominent roles on the mound. There was also a lot of experience on the field, as Chris Young and free agent signee Curtis Granderson were both over 30, while the 40-year-old Bobby Abreu was called up from AAA in late April.

The Mets set a rather unappealing record when their pitchers started the season in an 0 for 46 slump at the plate; the 1914 St. Louis Browns had set the previous record when their pitchers started the year 0 for 44. As of May 5th, the Mets had pushed the record to 0 for 51, with 26 strikeouts to boot. The drought ended on May 15th when, in his major league debut, Jacob deGrom hit a single off Chase Whitley of the New York Yankees, who was also making his debut (Whitley also collected his first career hit in that game, off deGrom). The record had reached 0 for 64 before the young hurler stopped it. It was a harbinger of great things to come for deGrom, who started off slowly but became almost unhittable after the All-Star Game and was voted the NL Rookie of the Year after the season.

On May 26th, the Mets fired hitting coach Dave Hudgens and replaced him with minor league hitting instructor Lamar Johnson. They also released veteran reliever Jose Valverde that day following a series of poor performances. On July 8th, the Mets recorded the 4,000th win in franchise history when they defeated the Braves, 8-3, behind Jacob deGrom. On August 14th, they set an obscure franchise record by losing their 11th straight home game to the Nationals, 4-1 for the most consecutive losses at home against one team.