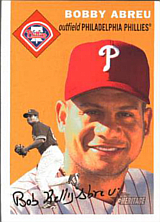 "When I played, no one was better at finding a pitcher's tells than Bobby Abreu. It didn't matter who was on the mound; Bobby was a mile ahead of his opponent. He knew what was coming. No wonder he played so cool." - Doug Glanville, The Game From Where I Stand

"He reminds me a lot of Roberto Alomar in terms of having the most fluid, pure swing of guys I've played with." - Jim Thome 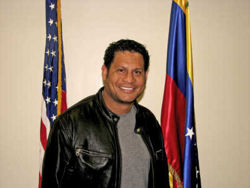 Bobby Abreu was one of the most gifted players in the major leagues during his 18-year career, possessing ample power, speed and a superb batting eye. He was extremely durable and hit over .300 six times, stole 20 or more bases fourteen times, drove in 100 or more runs nine times, hit over 20 homers nine times, worked over 100 walks twelve times with an OBP of more than .400 ten times and registered a career OBP of nearly 40 percent (.395). In the field, he was a steady, though unspectacular, performer. Abreu had two 30/30 seasons (becoming the first member of the Philadelphia Phillies to do so) and seven consecutive 20/20 seasons. Despite his superior talent and outstanding statistics, he was (rather curiously) only a two-time All-Star selection.

Abreu was signed by the Houston Astros in 1990 and was with the organization until 1997. He topped the Pacific Coast League in triples two years in a row at Tucson in 1995 and 1996. In 1996, Abreu was the Astros Minor League Player of the Year, batting .283/.389/.459 while scoring 86 runs in 137 games. This earned him a 15 game look at season's end. He saw time in 59 games in 1997 and did not light the world on fire (.250/.329/.372). Therefore, he was left unprotected so the club could protect fellow outfielder Richard Hidalgo from the upcoming expansion draft. Naturally, Bobby was drafted by the Tampa Bay Devil Rays with the sixth pick. But Abreu never played for the Devil Rays. Before the draft, the Devil Rays worked out a deal with the Philadelphia Phillies. When the Devil Rays picked Abreu, he was promptly flipped to Philadelphia for shortstop Kevin Stocker. Stocker never panned out, mostly due to injuries, and was out of the big leagues after 2000. Abreu went on to shine in Philadelphia for nearly a decade.

Despite his flashy numbers, Abreu never truly endeared himself to Phillie fans. He often took called third strikes, especially in clutch situations (a downside of his patience at the plate), and did not appear to "care enough" patrolling right field since he did not throw himself into the wall like former fan favorite Lenny "Nails" Dykstra or teammate center fielder Aaron Rowand. Abreu's reasoning was that he did not want to be injured, and it worked since he rarely requested days off and played nearly all of the team's games during his stay in Philly. 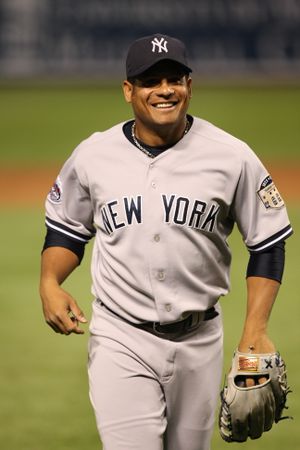 Abreu as a Yankee

On July 30, 2006, in the midst of a .277/.427/.434 season, he was pulled from the lineup as rumors spread that he had been traded to the New York Yankees. The rumors were true, as Abreu was involved in a six-player trade, saying "To play with those guys - Jeter, A-Rod and Giambi and those guys - it's going to make me feel good". While his power and average were down in 2006 (.297/.424/.462 combined with 15 homers and 41 doubles), he led the bigs with 124 walks between the two circuits. He was the Yankees' regular right fielder for his entire tenure in pinstripes, from July 2006 until the end of the 2008 season. He was an excellent and consistent hitter during that period, hitting between .283 and .330 with an excellent OBP and decent power. He hit 20 homers in 2008 and topped 100 RBI in both 2007 and 2008, while hitting 39 and 40 doubles. Although his throwing arm remained feared, his mobility on defense diminished during that period. After the 2008 season, he became a free agent and the Yankees chose not to re-sign him in order to free up money to go after other big name free agent prizes. When the dust settled, Abreu signed with the Los Angeles Angels of Anaheim, where he was slated to replace some of the production of Mark Teixeira, who had himself just signed with the Yankees.

Abreu played for the Venezuelan national team in the 2009 WBC, where he was the team's starting right fielder. With the Angels in 2009, he had an excellent first season when he hit .293/.390/.435 with 15 homers, scoring 96 runs and driving in 103 as the team's starting right fielder. He fell to .255 and .253 in full-time play in 2010 and 2011. He was still highly productive the first year, belting 41 doubles and 20 homers while scoring 88 runs, but the second year, he hit only 8 homers and scored 54 runs while being moved to the designated hitter spot following the acquisition of outfielder Vernon Wells in the offseason. Still, because of his excellent batting eye which resulted in 78 walks, his OPS+ was 104, and he was 21 for 26 in stolen bases attempts at age 37. The Angels were looking for more production, and with the signing of Albert Pujols to a huge contract, the return of Kendrys Morales from injury, and top prospect Mike Trout knocking on the door, Abreu was squeezed out of a starting position in 2012. There were attempts to trade him during spring training, but there were no takers given he had a year left on his contract and was due $9 million. He started the season with the Angels but received little playing time. He was batting .208 in a mere 24 at bats when the Angels, off to a terrible start, bit the bullet and released him on April 27th in order to call up Trout, swallowing the rest of his contract. He did not stay unemployed for long, as the crosstown Los Angeles Dodgers signed him on May 3rd. He played 70 games for the Dodgers, hitting .251 with 2 homers and 17 RBI in 179 at bats. When the team acquired Shane Victorino in a trade on July 31st, he once again was designated for assignment.

After not playing in 2013, Abreu was very good for the Leones del Caracas in the 2013-2014 Venezuelan League, earning a minor league contract and an invitation to spring training with the Phillies in 2014. He failed to make the team but was signed by the New York Mets as spring training ended. Sent to the AAA Las Vegas 51s, he hit .395 in 15 games to earn a promotion on April 21st, taking the place of Andrew Brown. He was hitting .238 with a homer and 14 RBI when the Mets handed him his release on August 4th; with the Mets out of contention, there was little point in playing him at the detriment of younger players like Kirk Nieuwenhuis, brought up to take his place. He was hitless in his last 22 at bats as a pinch-hitter after a hot start. Abreu accepted an assignment back to the 51s, where he hit .360 with 18 RBI in 26 games, prompting the Mets to call him back after the team was eliminated from the PCL playoffs. With a few days left in the season, he announced on September 26th that he would retire at the end of the year.

He first became eligible for the Hall of Fame in 2020 and received 5.5% of the vote, just enough to keep him on the ballot for another year. He improved his total slightly in 2021, to 8.7%.

The most similar players to Abreu, based on the similarity scores method, are Luis Gonzalez, Bernie Williams, Dwight Evans, Garret Anderson, and Torii Hunter.