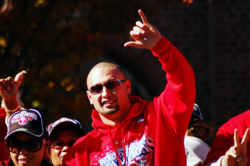 Shane Victorino was drafted by the Los Angeles Dodgers in the 6th round of the 1999 amateur draft. He was signed by scout Hank Jones and made his pro debut that summer.

Victorino became a huge star with the Philadelphia Phillies, making the All-Star team twice, being a key member of the Phils' World Championship team in 2008 and playing for Team USA in the 2009 World Baseball Classic. With Phils in an uncharacteristic down year in 2012, he was traded to the Dodgers on July 31st, rejoining his original organization in return for Ps Josh Lindblom and Ethan Martin. He was hitting .261 in 101 games at the time. With the Dodgers, he hit .245 in 53 games.

Victorino became a free agent after the 2012 season and was in high demand, in spite of his relatively poor last season. On December 4th, it was announced that he had signed a three-year deal with the Boston Red Sox for $39 million. It was the third significant free agent signing by the Red Sox that off-season, following their stunning last-place finish in 2012, as they had earlier inked OF Jonny Gomes and C Mike Napoli to deals. He had an excellent first season for Boston in 2013, earning a Gold Glove for his defensive play in right field while also contributing a .294 average in 122 games, with 26 doubles and 15 homers. He stole 21 bases and usually hitting second in the line-up behind CF Jacoby Ellsbury, he scored 82 runs and drove in 61 as the Red Sox finished in first place. He scored 7 runs on 14 hits, hitting .250, as the Sox breezed through the postseason, defeating the St. Louis Cardinals, 4 games to 2, in the 2013 World Series. He had one huge hit during that run, and it came in Game 6 of the ALCS against the Detroit Tigers on October 19th, when he connected for a grand slam off reliever Jose Veras in the 7th inning, transforming a 2-1 deficit into a 5-2 lead that held until the end of the game.

Victorino was injured at the start of the 2014 season, missing time with a hamstring injury and a bout with the flu and only making his debut for the team on April 24th. He then went on the disabled list again at the end of May, and only returned for a nine-game stint in July in what was essentially a lost season. In 30 games, he hit .268 with 2 homers and 12 RBIs and his absence was one of the factors that caused the Red Sox to tumble back to a last-place finish in the AL East one year after winning all of the marbles. The first half of 2015 was pretty much the same, as he played most of April, was out for two weeks, then missed all of June, while the Red Sox were stuck in last place again. In 33 games, he hit .245, with only 1 homer and 4 RBIs, then was traded to the Los Angeles Angels of Anaheim on July 27th, with Boston receiving IF Josh Rutledge in return. On August 31st, he crashed into the left field wall at the Oakland Coliseum and brought down a section of the wall with him; the game between the Angels and the Oakland A's was delayed ten minutes while the grounds crew patched up the damage. The problem was likely caused by the fact the ballpark had been hastily changed from its football configuration before the game and the panel had not been properly secured as a result. In what turned out to be his final season, he hit .230 in 71 games with 1 homer and just 7 RBIs.

He became a free agent after the 2015 season and signed as a free agent with the Chicago Cubs but never played for them in the majors. He was released at the end of spring training in 2016, then immediately re-signed but this time on a minor league contract. He went to play for the Iowa Cubs but hit .233 in just 9 games and was released again at the end of May, ending his career for good.

Victorino is a cousin of Kanekoa Texeira. A huge star in his home state of Hawaii, Shane appeared in the February 20, 2012 episode of Hawaii Five-O, along with Olympic speed skater Apolo Ohno, playing a business executive. He became eligible for the Hall of Fame in 2021 but was dropped off the ballot after failing to receive a single vote.