Home of the Oakland Athletics, 1968 to present

Originally a circular, open-air facility, the Oakland Coliseum was completed in 1966 as a multipurpose stadium. Its primary tenants were the NFL's Oakland Raiders, but the city was hoping to attract a big-league baseball team, since the Pacific Coast League's Oakland Oaks had departed a dozen years earlier. It has been known by a number of different official names over the years, although local residents usually refer to it simply as "The Coliseum".

In 1968, the city got its wish, as maverick owner Charles O. Finley agreed to move his Athletics from Kansas City to Oakland, where they became known as the Oakland Athletics. The move seemed to rejuvenate the struggling ballclub. After 15 consecutive losing seasons, dating back to when they played in Philadelphia and were owned by Connie Mack, the A's posted an 82-80 record their first year on the West Coast in what was to be the first of nine consecutive winning seasons. During that stretch, the A's captured five American League Western Division titles, three American League pennants, and three World Series championships (in 1972, 1973 and 1974). In accomplishing this, the Athletics became the first major pro sports team in Oakland to capture a championship.

The ballpark's most noticeable feature, however, is the great expanse of foul territory. It is there as a result of the Coliseum's football configuration, in which the end zones reside in the bullpen areas (football configuration link: [1]). In the early days, very few players complained about the foul areas; mostly, they were upset with the shoddy groundskeeping.

By the late 1970s, most of the stars of the championship teams had departed, leaving the roster depleted and consisting of over-the-hill veterans and unproven youngsters. From 1977 to 1979, the A's won 186 games and dropped 299. Attendance was lagging. The stadium had become nothing more then a cavern of gray concrete and inept baseball, with a scoreboard that often didn't work. It quickly became known as "The Mausoleum."

Two things happened in the early 1980s: on November 3, 1980, Finley sold the club to native San Franciscan Walter A. Haas, and he, along with his son Wally and Roy Eisenhardt, the new team president, began to give the organization a face-lift. A year later, the Raiders moved to Los Angeles, leaving the Athletics as the Coliseum's sole tenant. Over the next several years, not only did the A's improve, so did the ballpark's appearance. In 1987, the Coliseum was the backdrop for the All-Star Game. By this time, it had become one of the most beautiful venues in baseball: well-manicured grass, colorful advertisements which covered up the gray concrete, a brand new DiamondVision screen, and a rabid fan base brought around by a crop of new superstars, including Mark McGwire, Jose Canseco, Carney Lansford, Dave Stewart and Dennis Eckersley. As a result, the A's had returned to contender status. In a five-year span, they won four division titles, made three World Series appearances, winning one - in 1989 an A's four-game sweep over the cross-bay San Francisco Giants in an earthquake-marred Fall Classic.

By 1993, the A's were struggling again, and would be mired in a rut that would last for six years. In 1995, it was announced that the Raiders would return to Oakland, on the condition that more luxury boxes were added. After the baseball season ended, the renovations commenced. The work included removal of the bleachers and installation of a new bleacher section that was overall smaller, higher up than the old one, and featured chairs, instead of the bench-style seating. Above the new bleachers sit a row of plaza suites, a second deck of bleachers, two rows of luxury boxes, and a third deck of seats, higher than the original grandstand, aptly nicknamed "Mount Davis" by A's fans, in mock reference to Raiders owner Al Davis. Mt. Davis is used primarily for football seating, though it has been made available for expected high-attendance baseball games. On September 4, 2002, when the A's won a league-record 20th consecutive game, there were fans looking down from atop the Mount. In addition to baseball and football, the stadium has hosted a number of important soccer games, being home to the San Jose Earthquakes of Major League Soccer in 2008-2009 and hosting games of the 2009 CONCACAF Gold Cup.

The renovations also had an effect on the outfield dimensions. It is currently still 330' down the lines and 400' to straight-away center, but the distances in between changed. Straight-away left and right field is 367', and both power alleys are 388'.

In the late 2000s, the A's succeeded in drawing over 2 million fans per season for five straight years, but options were being explored for a new ballpark, spearheaded by new owner Lewis Wolff, who bought the team from Steven Schott. Wolff had originally been brought on by the A's in 2003 as Vice President of Venue Development, but in 2005, he pooled resources with Gap founder John Fisher to purchase the club.

On June 16, 2013, the Coliseum made the news when a sewer blockage flooded part of the field and both clubhouses. The A's and visiting Seattle Mariners were forced to share the Raiders' changing room to get ready for the next day's game. It was not the first such incident to occur at the aging facility, and owner Wolff used the occasion to reiterate the need for a modern ballpark in order to guarantee the A's future in Oakland, pointing out that the team was not in charge of maintenance, a responsibility of the city of Oakland and Alameda County, who had failed to live up to their responsibilities, particularly with the city facing a fiscal crunch. Another big sewage flood took place on September 21st, following heavy rains in Oakland. After the season, with the Athletics needing to negotiate a new lease on the aging facility, there was speculation in the media that they could decide to bolt altogether and share AT&T Park with the San Francisco Giants instead. However, owner Wolff immediately discounted those rumors, saying the A's were "looking forward to another great season" at the Coliseum.

The A's went 16 years without a rainout at the Coliseum. A game had to be postponed because of weather on May 5, 1998, and the event did not re-occur until April 1, 2014. Ironically, only three days later, another rainout occurred, not because any rain was falling, but because the field was too soggy, the result of having being left uncovered the previous night in order to dry out, but instead being the recipient of a steady drizzle that made it unplayable the next day. On July 22nd that year, Wolff announced that he had agreed to a ten-year lease extension with the city of Oakland to keep using the ballpark, in spite of the recent flooding and maintenance issues. Another maintenance issue came up in a game on August 31, 2015. the Raiders had played an NFL game there the day before, and the ballpark had been hastily returned to its baseball configuration. However, it seems that one of the panels in the outfield fence was not properly secured, as when the Los Angeles Angels' Shane Victorino crashed into the wall running after a ball, he brought down the panel with him. The game had to be stopped for ten minutes while the grounds crew fixed the damage and the incident again brought into light some of the park's shortcomings.

On March 27, 2017, it was announced that the NFL Raiders were leaving the city for the second time, headed to Las Vegas, NV. This move would bring to an end to the last remaining ballpark-sharing arrangement between an MLB and an NFL team, an arrangement that was favorable to neither franchise and had helped to torpedo plans for a move to a more contemporary facility for the Athletics. The move, coupled with the planned move of the NBA's Golden State Warriors across the bay to San Francisco, CA, meant that the Athletics were the sole remaining professional sports franchise calling Oakland home, something which, it was hoped, would encourage the city to put out all the stops to ensure their long-term future. The A's were actively looking for a downtown site to build a new ballpark, but were dealt a blow in December of 2017 when the Peralta Community College District, owner of the team's preferred site located near Laney College, announced that it was ceasing discussions with the team because of opposition to the proposed development by the school's staff and users. One of the options still on the table was to build a new facility on the site of the Coliseum, although it came with major drawbacks, given the stadium's location far from any fan-friendly amenities such as bars or shops.

On April 17, 2018, the A's offered free admission for their home game against the Chicago White Sox; that game marked the 50th anniversary of the first major league game played at the Coliseum. Over 46,000 fans were in attendance for a 10-2 win over the Chicago White Sox. The game featured a return appearance by Lew Krausse, who had started and lost the original game 50 years earlier. This time, Krausse was there to throw the ceremonial first pitch. This ushered in a great season by the A's who came out of nowhere to make the postseason for the first time since 2014. There was more good news after the season, as the team announced on November 28th that it had identified a site for a new ballpark, on the downtown waterfront near Jack London Square. With the Raiders also planning to leave the Coliseum in order to move to Las Vegas, NV, this would also allow the stadium's site to be redeveloped. In May 2019, the city of Oakland's port commission gave the A's a four-year window to conduct an environmental impact report in order to propose development for the chosen site, an important first step. However, by May of 2021, the proposal had stalled, and the A's received permission from MLB to explore potential relocation options as a way to increase pressure on local authorities.

In an ironic twist, in mid-2019, Raiders owner Mark Davis had the gall to criticize the A's for making some improvements to the stadium to make it more baseball-friendly, such as adding theater boxes and terrace tables, since these did reduce the number of seats available for football by a small number. The Raiders had of course broken their lease to decamp to Vegas, then decided to play one final season in Oakland when they failed to make appropriate arrangements to have a stadium ready to host them for the 2019 season. Davis acknowledged the A's were completely within their rights to make the changes they did, but still poured bile on them. His outburst was even more appalling given how much the moves made to accommodate Davis's father in 1995 had disfigured the stadium. 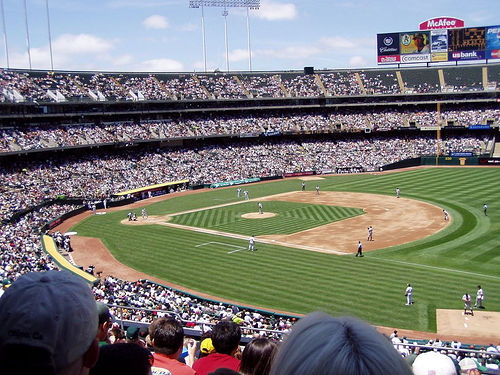 Some notable events at the Oakland Coliseum: