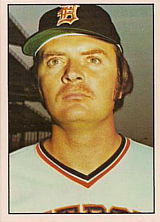 Lerrin LaGrow, who pitched ten years in the big leagues, had some years where he was a starter and some where he was a reliever. Perhaps his most notable year was 1977, when his 25 saves were third in the American League for a Chicago White Sox team featuring the "South Side Hit Men".

LaGrow was at Arizona State University at the same time as Len Randle, Paul Powell, Larry Gura, Larry Fritz, Craig Swan and Jim Crawford. Drafted in the sixth round of the 1969 amateur draft, he split his time between the majors and minors in 1970, 1972 and 1973 while spending all of 1969 and 1971 and most of 1976 in the minors. Most of his minor league career was as a starter, with his best year in 1970 when he went 11-4 for the AA Montgomery Rebels. Lerrin was with the Philadelphia Phillies who went on to win the 1980 World Series, but he was released in July to end his major league career.

LaGrow was the pitcher who hit Bert Campaneris in the ankle during a game in the 1972 American League Championship Series. Campaneris threw his bat at LaGrow and while the benches cleared, no brawl erupted. Tigers manager Billy Martin and his hair-trigger temper had to be restrained by umpires and teammates so he wouldn't go after Campaneris. Both LaGrow and Campaneris were suspended for the remainder of the Series.