“You can talk about Reggie Jackson, Catfish Hunter, and Sal Bando, all those great players, but it was Campy who made everything go.” - Charlie Finley, to Peter Gammons, The Sporting News, October 4, 1980 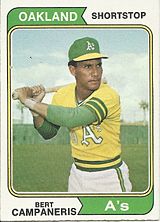 Nicknamed "Road Runner", speedy shortstop Bert Campaneris was a regular for the Kansas City and Oakland Athletics for more than a decade. He was a six-time All-Star, a six-time American League stolen bases champion, and the first big leaguer to play all nine positions in a single game.

The cousin of Jose Cardenal, Cuban-born Campaneris was signed by Kansas City scout Felix Delgado in 1961 for a mere $500. Originally a catcher, he soon moved to the infield and quickly advanced through the minors. After hitting .325 for the Birmingham Barons of the Southern League in 1964, he was called up by the A's in July. In his big league debut on July 23rd, he hit a home run off Jim Kaat of the Minnesota Twins on the first pitch he saw. He added another homer off Kaat in the 7th inning to become the second player in history to hit two home runs in his first major league game.

In just his second season, Campaneris led the American League with 12 triples and 51 stolen bases. On September 8, 1965, playing against the California Angels, he became the first man in major league history to play all nine positions in a single game (a feat later matched by Cesar Tovar, Scott Sheldon, Shane Halter and Andrew Romine). He went 0 for 3 in the contest and gave up one earned run in one inning on the mound. After leading the AL in steals again, with 52 in 1966, Campy paced the circuit a third straight year, with 55 stolen bases in 1967. On August 29th that year, he hit three triples in a game against the Cleveland Indians to tie a record. The A's moved to Oakland the next summer, and he paced the circuit in stolen bases for a fourth straight season, this time with a career-high 62. He also led the AL with 177 hits while earning a spot on the All-Star team for the first time in his career. Campaneris once again paced the AL in steals with 42 in 1970, clubbing a career-best 22 home runs (he never reached double figures in any other season). The A's captured their first of five straight AL West titles in 1971, and the following summer, 1972, Campy led the AL in stolen bases for the sixth and final time with 52.

In the second game of the 1972 ALCS against the Detroit Tigers, Campy had gotten off to a roaring start, with three hits, two stolen bases and two runs scored. Digging in against Lerrin LaGrow, he was drilled in the ankle with a pitch, LaGrow likely following the directive of skipper Billy Martin. Campy erupted by tossing his bat at LaGrow's head and charged the mound, with Bert and Billy naturally tussling. He was suspended for the remainder of the ALCS and fined $500 but allowed to play in the World Series. He struggled at the plate, hitting just .179 and scoring a single run, but Oakland managed to capture a championship in seven games against the Cincinnati Reds. As a result of the playoff incident, Campaneris sat out the first seven games of the 1973 campaign.

The A's continued to roll, with Campaneris continuing to shine. In the 1973 ALCS versus the Baltimore Orioles, Bert hit a home run in Game 2 and clubbed a game-winning 11th-inning home run off Mike Cuellar in Game 3. He recorded nine hits, including a home run, against the New York Mets in the World Series and stole three bases as the A's repeated as World Champs. In the following year's Fall Classic, he hit .353 against the Los Angeles Dodgers as Oakland made it three in a row. The next two seasons, in 1975 and 1976, his offensive output declined, but he still showed some speed, stealing five bases in a May 24, 1976 game against the Chicago White Sox.

After 1976, Campaneris became a free agent and, like many of his teammates, bolted Charlie Finley's coop for less infuriating pastures, signing with the Texas Rangers. He struggled offensively, leading the AL after being caught stealing 20 times in 1977 and batting only .186 in 98 games in 1978. Early in 1979, he was dealt to the California Angels for Dave Chalk, and he played three mostly unspectacular seasons for the team. After not playing in 1982, he returned for a final season in 1983, playing 60 games for the New York Yankees as a utility player.

In 2019, he took his place in the new Athletics Hall of Fame, having been established by the club one year prior.

During spring training 2015, actor Will Ferrell paid tribute to his favorite player, Campy, by participating in five different games for ten teams in one day, and playing all nine positions in the process.