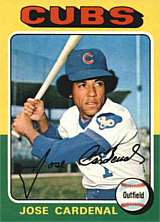 "I played with (Al) Kaline 10 years, and I'll tell you Cardenal is the complete player and in some areas is better than Kaline." - Hank Aguirre, to The Sporting News, July 14, 1973

The Cuban-born Cardenal was signed by the San Francisco Giants in 1960 and made his pro debut the following summer. He reached the majors with the Giants in 1963, going 1-for-5 in 9 games, but spent most of that year with the El Paso Sun Kings of the Texas League, hitting .312 with 36 home runs and 35 stolen bases. After spending most of 1964 with the Tacoma Rainiers, he was back in the big leagues with San Francisco that September, going hitless in 15 at-bats. Stuck behind Willie Mays, Willie McCovey, Jesus Alou, and Matty Alou on the Giants depth chart, he was peddled to the California Angels for catcher Jack Hiatt that fall.

Cardenal became a starter for the Angels in 1965, hitting .250 with 11 home runs while stealing 37 bases. After three seasons in California, he was dealt to the Cleveland Indians for Chuck Hinton. He went from the Indians to the St. Louis Cardinals to the Milwaukee Brewers before being sent to the Chicago Cubs following the 1971 season. He hit .290 or above for five consecutive seasons with the Cubs from 1972 to 1976, slugging a career best 17 home runs in the first season of this stretch. On May 2, 1976, he went 6-for-7 in the first game of a doubleheader against the Giants. While never an All-Star, he was a very good player who could do a bit of everything: hit for average, pick up extra bases, steal some bases, and field all three outfield positions. That made him a quietly valuable player.

Cardenal moved on to the Philadelphia Phillies following the 1977 season and went to the New York Mets in midseason in 1979. Released in August 1980, he was picked up by the Kansas City Royals for the season's stretch run. He hit .340 in 25 games for the Royals and made his only World Series appearance that October, going 2-for-10 as his team fell to the Phillies. He retired following the season.

José ultimately played an impressive 2,017 games in his career, batting .275/.333/.395 with 1,913 hits, 333 doubles and 936 runs scored. This despite carrying the weight of a reputation for being flaky and somewhat moody, two traits often used to run men out of baseball as quickly as possible. He was often known to chew on the vines that cover the outfield wall at Wrigley Field, and, fairly or not, he was sometimes known as a hypochondriac. He was remembered fondly by First Lady Michelle Obama in 2017 at a White House ceremony to recognize the 2016 Cubs World Series victory, with some veterans of past teams brought along to reminisce. Michelle remembered how she wore her Cubs cap on her head similarly to Cardenal, José having sported one of the game's all-time great Afros during his Cubs prime.

After his playing days, Cardenal was a long-time big league coach. He was on the Cincinnati Reds staff in 1993 and with the St. Louis Cardinals the next two seasons, 1994 and 1995. From 1996 to 1999, he was a New York Yankees coach and spent the next two years with the Tampa Bay Devil Rays. In 2002 and 2003, he was once again a member of the Reds coaching staff. From 2005 to 2009, he served as a senior adviser to the general manager for the Washington Nationals.

Cardenal is a cousin of Bert Campaneris and the brother of Pedro Cardenal, a former infielder in the St. Louis Cardinals chain.