Inducted into Hall of Fame in 1980

Al Kaline was a teen phenom from Baltimore, MD who became the regular right fielder for the Detroit Tigers in 1954 at age 19. He was signed by Tiger scout (later an executive) Ed Katalinas for a reported $25,000, who told the front office that he was a better player than the starting outfield they had. In 1955, he leaped into stardom, winning the batting championship, the youngest champion ever at 20, younger by one day than Ty Cobb. He played on for two decades, never winning another batting title but finishing in the top three in the American League five more times. He hit 399 home runs although he didn't think of himself as a slugger, and was honored with 10 Gold Gloves.

Though not as famous as Hank Aaron, Roberto Clemente, Willie Mays or Mickey Mantle, his overall skills of batting for average, power, plus his speed and fielding ranked him second in the American League for his career, after Mantle. He had a wonderful throwing arm, best in the American League, combining power and accuracy. His Gray Ink score, a way of measuring how often a player is among the league leaders in offensive categories, is 228, well over the average Hall of Famer's score of 144. Curiously, he retired one short of 400 career homers. Unfortunately, his career batting average finally slipped under .300 at the end of his Tiger career. Kaline used the DH role in his final season to get over the 3,000 career hit mark. 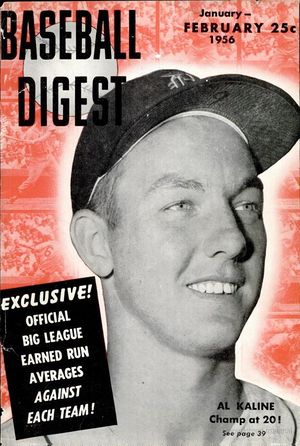 He slugged .655 in the 1968 World Series, which the Tigers won, defeating the St. Louis Cardinals in seven games.

On top of it all, he was a true gentleman. He won the first Roberto Clemente Award which honored his fine qualities as a human being. Later, he long served as a Tiger broadcaster, with another old Tiger hero and batting champ, George Kell. He was a Tigers broadcaster from 1976 to 2001. He was elected to the Baseball Hall of Fame on January 9, 1980 by the Baseball Writers Association of America.

He makes the "Cool Names" list because some fans have noticed that his names when pushed together make the word "alkaline". His first baseball card appearance was in the 1954 Topps set.

Some argue that he never hit 30 homers in any season; retired with less than a .300 career BA; barely failed to reach the 400 career homers mark, and tallied over 100 RBI in only 3 of his 22 seasons, so how great could he be? But that assessment completely overlooks that he played during a dead ball era when his offensive performances were quite good, and he also added numerous Gold Gloves. Therefore, he ranks #7 all-time on the JAWS list of the best right fielders - better than two-thirds of the Hall of Famers at that position. Nevertheless, he was being modest when he said:

"I wasn't meant to be a superstar. I'm no Willie Mays, or Mickey Mantle," said Kaline.

His grandson, Colin Kaline, was drafted by the Tigers in both 2007 and 2011, signing the second time and later released.