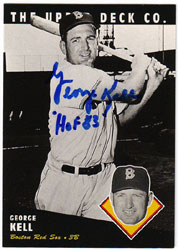 "He doesn't have the power of Joe DiMaggio or Ted Williams, but... every time you look up, he's on the bases. Bunting, stealing and on the hit-and-run, he drives you nuts. He's a player of the old school." - Ted Lyons

Known for his excellent defense, Hall of Fame third baseman George Kell was a 10-time All-Star and won the 1949 American League batting championship. He was the brother of Skeeter Kell.

Kell began his pro baseball career in 1940. After being rejected for military service during World War II due to bad knees, he enrolled at Arkansas State University but did not play for the school's baseball team. He continued his minor league playing career as well, hitting .396 with the Lancaster Red Roses of the Inter-State League in 1943 to lead all of organized baseball while recording 120 runs scored, 220 hits, and 23 triples.

Kell reached the majors in 1943 with the Philadelphia Athletics, appearing in one late-season game with the club. He became the team's regular third baseman in 1944 and went on to lead the American League in fielding in 1945.

Kell was traded to the Detroit Tigers in May 1946 for Barney McCosky and ended that year with a .322 average, beginning a streak of eight consecutive years with an average over .300. In 1947, he hit .320 and was named to his first All-Star team. In 1948, he was limited by injuries to just 92 games, and his average dropped to .304. He bounced back the next summer and barely nipped Ted Williams for the AL batting championship, hitting .34291 to Williams' .34276 and denying Williams his third Triple Crown. Kell struck out only 13 times that year and was the first third baseman to win a batting title since Heinie Zimmerman in 1912. In 1950, he hit .340 while leading the league with 56 doubles and 218 hits.

In June 1952, Kell was sent to the Boston Red Sox as part of a nine-player trade. After two years with Boston, he was traded to the Chicago White Sox in 1954, the first time his batting average fell below .300 in nearly a decade. He was dealt to the Baltimore Orioles after about two years in Chicago. With the O's he started two more All-Star games and helped with the development of a young Brooks Robinson, the man who would succeed him as Baltimore's third baseman. Kell ended his big league career following the 1957 campaign.

Overall, Kell played 15 seasons in the majors (all in the American League), hit more than .300 nine times, and put together a career average of .306. He was inducted into the Hall of Fame in 1983, the same year as his former Orioles teammate Brooks Robinson.

Kell parlayed his soft Southern voice into a long career as a Tigers broadcaster from 1959 to 1996, except 1964, teaming for years with Al Kaline and Ernie Harwell. Kell had worked as a TV Game of the Week broadcaster in 1958. He was severely injured in a car crash in 2004 but recovered. He died in 2009 at age 86.