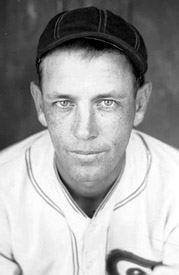 "If I had the choice of any pitcher for a clutch game, the guy I'd pick would be Ted Lyons." - Tris Speaker

Hall of Famer Ted Lyons pitched his entire 21-season career with the Chicago White Sox. He is the club's all-time leader in wins (260), games started (484), and complete games (356) despite playing on teams with losing records during most of his career.

A sore arm limited Lyons to just 22 games in 1931 and cost him his fastball. However, he changed his pitching style to put more emphasis on control, and he remained a mainstay in the Sox rotation for more than another decade. By the end of the 1930s, he pitched mostly on Sundays, because his popularity with the fans drew the biggest crowds on those days.

On September 19, 1934, Lyons pitched in the second game of a doubleheader against the Philadelphia Athletics. This was noteworthy as he pitched in 99 more doubleheaders in the rest of his career, always the first game, never the second. 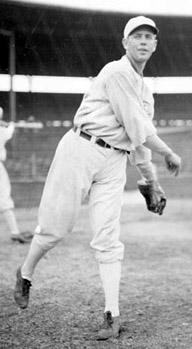 On August 31, 1941 Jack Hallett relieved Lyons in the first game of a doubleheader in St. Louis. It was the last time Lyons was relieved in a game for the rest of his career. Lyons subsequently made 28 starts before retiring in 1946 and completed them all. After going 14-6 with 20 complete games in 20 starts as a 41-year-old in 1942, Lyons joined the Marines at the end of the season. At the end of World War II, he was discharged in December 1945. He returned to the Sox in 1946, at age 45, the oldest player in the majors at the time. After making 5 starts for the club, Lyons retired on May 19th and became the team's manager on May 25th.

He has a higher percentage of complete games than any other pitcher of his era. In effect, he served as his own closer: a researcher wondered if pitching so many complete games cost him wins by blowing late-inning leads that a fresh relief pitcher could have saved, but in fact the numbers state otherwise. When he pitched into the 8th or 9th inning with a close lead (i.e. a save situation), he closed out the win at a success rate of 86%, better than the vast majority of closers. Of course, the position of closer did not exist at the time, but it's clear that letting Lyons finish what he started as much as possible was a good strategy.

Lyons later spent time as a Detroit Tigers coach from 1949 to 1953 and was a member of the Brooklyn Dodgers staff in 1954. In 1955, he managed the Memphis Chickasaws to a regular season first place finish in the Southern Association.

An excellent athlete, he appeared in 18 games as a pinch runner in 1931, and made a total of 60 pinch running appearances in his career overall.