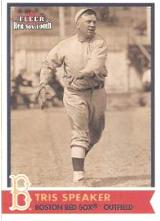 "You couldn't ask for a better all-around player." — Joe Wood

" . . . there can be no doubt that in Speaker (the Red Sox) possessed the greatest fielding outfielder in the game . . . Furthermore, Speaker was almost as much dreaded for his batting and baserunning as he was for his marvelous fielding gifts." - from an article in Baseball Magazine in 1916

Tris Speaker is not merely a Hall of Famer, but is without question an "Inner Circle" member. In the days before Babe Ruth, Tris Speaker and Ty Cobb were, along with Honus Wagner, quite possibly the most famous major league baseball players. People used to argue about which one of the two was better, much in the way that people later would spar over Mickey Mantle and Willie Mays. Speaker's Hall of Fame plaque, while not settling the issue, calls him the "greatest center fielder of his day" (meaning "the best fielding" center fielder, as there is no argument he was #2 to Cobb in both batting and baserunning).

The three-time World Series ring winning Speaker was almost always among the league leaders in offensive categories. He ranks # 6 all-time with 346 points on the Gray Ink Hall of Fame list, (one ahead of Babe Ruth but six behind #1 Ty Cobb), though vastly behind either in the more important Black Ink totals (at #41 to Ruth's #1 and Cobb's #2). Today he is regarded as trailing Mays and Cobb on the All-Time list of center-fielders (many people following them with Mantle, or Speaker then Mantle) and ahead of Joe DiMaggio and Ken Griffey, Jr..

He is one of only two players to ever hit 50 doubles and steal 50 bases in the same season.

He was not only the premier fielding center fielder of his day but perhaps of all baseball history, holding career records in assists (449) and double plays (139). He was fast enough that he would play shallow and if a ball was hit over his head he could usually run back fast enough to corral it. His lifetime range factor is much better than era rival Cobb's. Speaker's throwing achievements are all the more remarkable considering they were achieved by throwing with his off hand. At age 10, he was thrown from a horse and broke his collarbone and right arm, causing him to throw lefty the rest his life.

"When I was a rookie, Cy Young used to hit me flies to sharpen my abilities to judge in advance the direction and distance of an outfield-hit ball." - Tris Speaker

Unfortunately, the 1910s were a time when owners were not free with money, and the Red Sox's owner proposed to cut Speaker's salary after the 1915 World Series because Speaker had hit only .322 during the regular season (it was still the fourth-best batting average in the league, but lower than usual for him). Speaker refused to sign and was traded to the Indians. He had played with the pitcher Babe Ruth in Ruth's first full season in 1915, and because of the trade Speaker would miss Ruth's best years as a pitcher as Ruth helped bring two more World Series victories to the Red Sox in 1916 and 1918. Speaker would, however, be joined on the 1920 World Series champion Indians by former Boston teammates Smoky Joe Wood, who had converted at that point from pitcher to outfielder, and Larry Gardner.

Late in their careers both Speaker and Cobb were alleged to have been involved in a thrown game. They were both induced to "resign" as managers, but the charges were weak and they were absolved. As a result, Speaker played his last two seasons with the Washington Senators in 1927 and the Philadelphia Athletics in 1928. In his last season, he has an AL-record streak of 14 consecutive games with an RBI, ending in the first game of a doubleheader on May 30. Interestingly, he would only drive in two runs in the rest of the season.

Speaker is the uncle of Tex Jeanes.

He managed for parts of three seasons in the minor leagues: as a player-manager with the Newark Bears in 1929-30 and with the Kansas City Blues in 1933.

He was elected to the Baseball Hall of Fame on January 19, 1937 by the Baseball Writers Association of America. He continued to be active around baseball after his retirement: for example, when Larry Doby became the first black player in the American League, Speaker worked with him to assure that his skills were up to par for the majors. He made his first Baseball Card appearance in the 1909 T206 Tobacco set.

". . . Cleveland in Tris Speaker has not only a great ballplayer but a magnetic leader who knows how to get 100% from the efforts of his men. The Texan is an unusual type - the most effective manager in baseball today." - from an article written by Grantland Rice in 1921, after Speaker had managed the winner of the 1920 World Series