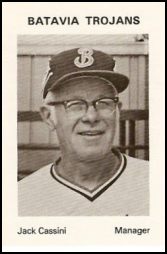 Jack Cassini was in 8 games with the 1949 Pittsburgh Pirates, scoring 3 runs in action entirely as a pinch runner. He had a long minor league career, hitting .305 in 1948 for an Indianapolis Indians squad that won 100 games.

After his inaugural minor league season, the Cincinnati Reds purchased his contract and assigned him to the Ogden Reds of the Pioneer League. He spent the next four seasons in the Army, before returning with the Syracuse Chiefs of the International League in 1946. After a slow start, he was sent down to the Texas League where he played a lot better. He split his time between shortstop, second base and third base during those years, and when he attended Reds spring training in 1947, he did not have a regular position. He went back to the Tulsa Oilers of the Texas League for another season. There, he had a foot race against Joe Tepsic, a tremendous athlete who had run track in college and was reputed to be one of the fastest man in organized baseball. Cassini won the race, and after the season was drafted by the Indianapolis Indians of the American Association. He kept piling on the stolen base titles, and after the 1948 season, the Pittsburgh Pirates purchased his contract.

Cassini was expected to compete for the Pirates' third base job in 1949 but he ended up as a bench player, being used solely as a pinch runner, scoring three times, before being sent back down to the American Association. He was traded to the powerful Brooklyn Dodgers for Danny O'Connell after the season, but ended up spending four seasons with the St. Paul Saints, unable to escape the American Association. He was a circuit All-Star in 1952 and 1953, then spent the 1954 season with the Montreal Royals, another top farm team of the Dodgers, this time in the International League. He was allowed to join the Memphis Chicks of the Southern Association in 1955 as a player-manager. As the team's regular second baseman, his stint was cut short when he was hit in the face by a pitch on August 2, suffering a broken cheekbone and blurred vision.

That effectively ended his playing career, but he continued for the next two decades as a scout and minor league manager for four different organizations. He eventually retired in Arizona. His younger brother, Eddie, was a minor league umpire.