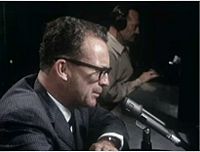 Ernie Harwell was a broadcaster primarily for the Detroit Tigers. He began his career with the Atlanta Crackers in 1940.

Harwell worked for the Atlanta Crackers for six seasons, with three years off during World War II, before he was promoted to the big leagues. In 1948, Branch Rickey called the Atlanta club to get their announcer. Red Barber took ill and they needed someone to fill in for the Ol' Redhead. Atlanta's ownership said they wanted catcher Cliff Dapper for Harwell. Rickey agreed and Harwell was traded to Brooklyn.

Dapper and Harwell never met until Harwell was retiring after many years in Detroit. Dapper came to Detroit to present Harwell with a videotape of tributes from baseball luminaries.

Harwell stayed in Brooklyn for two years before moving to the Giants for four seasons (1950-1953). During this time, he called the Shot Heard 'Round the World on television. His call is lost to history but Russ Hodges' radio call endures. 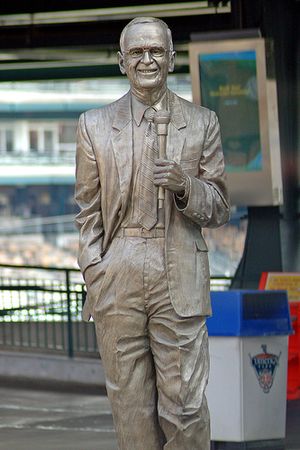 In 1960, Harwell replaced Van Patrick in Detroit. Paired over the years with George Kell, Ray Lane, and finally Paul Carey, Harwell was the Tigers' broadcaster for the next 31 years before he was unceremoniously fired. It was announced that Harwell would not be re-signed after 1991. There was a great uproar in Detroit. After a 1992 season without Harwell (other than a weekly national broadcast on CBS Radio), he returned to the airwaves for ten more seasons of Tigers baseball.

Ernie Harwell retired in 2002. Harwell maintained a low profile throughout the next few years, making notable appearances on nationally televised games such as the 2005 All-Star Game at Comerica Park. In 2007, he became a major player in the ill-fated attempt by the Tiger Stadium Conservancy to preserve the former home of the Tigers; his promise to put portions of his extensive collection of baseball memorabilia on permanent display in a museum constructed in the original (1912) structure were not enough to overcome the Conservancy's lack of funding, and he withdrew to the background before the preservation effort failed and the ballpark was razed.

A particular sideline of Ernie's was songwriting, with over 200 songs to his credit, of which about 50 were recorded. Fittingly, his best-known song is about baseball. Co-written in 1973 with Tigers pitcher Bill Slayback, who performed it, Move Over Babe (Here Comes Henry), is a tribute to Hank Aaron in his chase of Babe Ruth's all-time home run record.

Harwell's Tiger broadcasts were best known for his anecdotes, knowledge of the history of the game, and his catch phrases. Batters called out on strikes "stood there like the house by the side of the road", a home run was "Long gone!", and foul balls were "taken home by a man from Sterling Heights", or other Metro Detroit or Michigan locale. Not until he was retired for several years did he admit that he didn't know where the person was actually from.

Through an article in the Detroit Free Press published on September 3, 2009, Ernie Harwell publicly announced that he had been diagnosed with cancer in an area of the bile duct, that it was incurable, and that he would not undergo surgery, chemotherapy or other treatment, saying "It could be a year, it could be much less than a year, much less than a half a year. Who knows? Whatever's in store, I'm ready for a new adventure."

Ernie Harwell was honored with the Ford Frick Award in 1981. He is also a member of the Michigan Sports Hall of Fame, the National Sportscasters and Sportswriters Hall of Fame, and the Radio Hall of Fame. He was awarded the Jack Graney Award by the Canadian Baseball Hall of Fame in 2002. Harwell died in 2010 the day before he was supposed to receive the Vin Scully Lifetime Achievement Award in Sports Broadcasting.