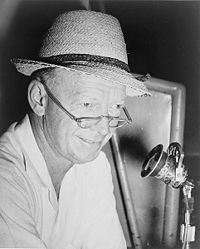 Red Barber was a broadcaster who called play-by-play for three clubs over 33 seasons. After his career in the booth was over, he wrote many books and frequently could be heard on National Public Radio.

Barber began his career after finishing his studies at the University of Florida. In 1934, he was hired by the Cincinnati Reds as their lead broadcaster. He moved to the Brooklyn Dodgers in 1939.

In Brooklyn, the soft talking southerner became a national icon. He coined several famous cliches from "the catbird seat." It was also during this time he became known as the "ol' redhead."

He was the paragon of telling the truth and playing it straight, that is not being a fan of the team on the field. When recreating games he would not use fake cheering in the background. Instead the teletype machine could be heard in the background. During his final years in Brooklyn, Barber mentored a young Vin Scully.

Barber moved from Brooklyn to the Bronx when he was hired by the New York Yankees in 1953. For eleven years, he was paired with Mel Allen as the Yankees, with Mickey Mantle, Yogi Berra, and Whitey Ford, piled up pennants for the Pinstripers. Barber was fired by the Yankees in 1966.

In retirement, Barber became a noted author, writing several books on baseball. At age 73, he returned to radio as a weekly commentator on Morning Edition on NPR.