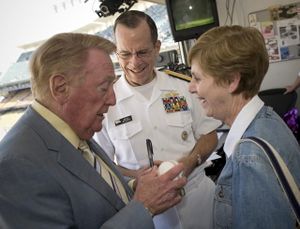 Scully (left) autographs a ball for Navy Adm. Mullen and his wife

"Football is to baseball as blackjack is to bridge." - Vin Scully

Vin Scully is an announcer for the Los Angeles Dodgers. He began his career with the Brooklyn Dodgers in 1950 and moved to Los Angeles, CA with the club in 1958. He is considered by many to be the greatest broadcaster in history. In 2013, he began his 64th season with the club, the longest affiliation in baseball. He did miss the Dodgers' home opener for the first time that year, fighting a nasty cold that he described as being "only a click away from pneumonia", and then confirmed his return in 2014 later that season. In August of 2015, he announced that he would be back in 2016 for a 67th and final season behind the microphone.

After studying at Fordham University, he served briefly in the U.S. Navy, where he was part of the radio communications program. He got his start at Washington, DC radio station WTOP in 1949, and caught his big break when he stood in for a more senior colleague in calling play-by-play for a college football game between the University of Maryland and Boston University at Fenway Park that fall. He was noticed by Red Barber, who was the CBS network's sports director, and a few weeks later, when an opening arose in the Dodgers' broadcast booth as a result of Ernie Harwell leaving to broadcast New York Giants games, Scully was hired. Just 22, he worked with Barber and Connie Desmond. He gradually became the team's primary announcer after Barber left to work for the New York Yankees, and Desmond became increasingly unreliable due to alcoholism. He first drew national attention when he worked the 1953 World Series in tandem with Mel Allen, the legendary voice of the Yankees. Jerry Doggett replaced Desmond in 1956, and also moved to L.A. at Vin's insistence, where he continued to work for years.

Baseball fans know Scully's voice instantly because of its smoothness. For many years, Scully was heard nationally calling the All-Star Game and World Series games for CBS Radio and NBC television. For NBC he teamed up with Joe Garagiola for the Saturday afternoon Game of the Week starting in the early 1980s, and also being heard on World Series broadcasts in even-numbered years when NBC held the television rights (ABC broadcast the Series in odd-numbered years). Scully also called NFL games on CBS television from 1975 to 1982, as well as tennis and golf.

Among Scully's most famous national calls are Bill Buckner's error in the 1986 World Series and Kirk Gibson's game-winning home run in the 1988 World Series.

Scully is one of the last broadcasters to work solo. Scully calls the first three innings of each Dodgers game alone, with the TV and radio signals simulcast, and then continues for the remainder of the game on TV only. When asked why he goes solo, partner Charley Steiner said "Poets don't need straight men." Scully himself says that broadcasting solo allows him to have a conversation with the listener rather than a broadcasting partner, and this allows a rapport with the listener that could not otherwise occur.

Scully holds records for most World Series as a broadcaster with 28. He also has the longest tenure with one club at 67 seasons. Scully has also been behind the microphone for 20 no-hitters and three perfect games (by Don Larsen, Sandy Koufax, and Dennis Martinez). To underline his tremendous accomplishments, the Dodgers honored him with a bobblehead doll and had him throw the ceremonial first pitch on August 30, 2012.

He has been named California Sportscaster of the Year 21 times. Scully won the Ford Frick Award in 1982. He was given the Lifetime Achievement Emmy in 1995. The American Sportscasters Association named him Broadcaster of the Century in 2000. Historian Curt Smith named Scully the greatest of all time in his 2005 book Voices of Summer. On January 1, 2014, he was the Grand Marshal of the annual Tournament of Roses Parade in Pasadena, CA. In September of that year, he was the recipient of the Commissioner's Historic Achievement Award, the second non-player to receive the prestigious distinction after Rachel Robinson, widow of Jackie Robinson. In 2016, in honor of his final season behind the microphone, the Los Angeles city council renamed the street on which Dodger Stadium is located "Vin Scully Avenue", with the ballpark's address being 100 Vin Scully Ave. (it was originally called Elysian Park Ave.) On November 18th, he received the Presidential Medal of Freedom at the White House from President Barack Obama.

On January 3, 2021, Vin's wife of 47 years, Sandra, died from complications of ALS, also known as "Lou Gehrig disease". Scully had been active in raising funds to combat the disease, including an auction of personal memorabilia he had collected over the years that raised over $2 million in September of 2020. The two had married in 1973 and had one daughter; Sandra had two children from a previous mariage, while Vin had three from his first wife, who died of an accidental overdose in 1972. He passed away on August 2, 2022 at the age of 94.