"There is no room in baseball for discrimination. It is our national pastime and a game for all." - Lou Gehrig

Lou Gehrig's reputation as an American baseball star is perhaps only overshadowed by his untimely death from the disease that would take his name. Gehrig was among the greatest hitters in baseball history, combining outstanding batting average (.340), power (493 home runs and 1995 RBIs), patience (1508 walks), and surprising speed (163 triples and 15 thefts of home). He was also legendarily tough, earning the nickname The Iron Horse for appearing in a then-record 2,130 consecutive games.

Born in New York City to German immigrant parents, Lou Gehrig was the only one of four children to survive past early childhood. He first made headlines in 1920, when his Commerce High School baseball team traveled to Chicago, IL to face Lane Tech High School for an inter-city championship game. Gehrig hit a late-inning grand slam over the Wrigley Field fence and was hailed as "The Babe Ruth of the High Schools" in the papers. 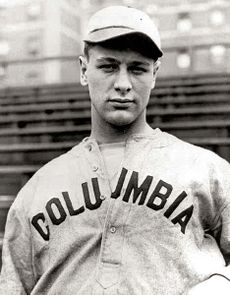 Gehrig in uniform for Columbia University

He began his professional career the summer before starting at Columbia University, where he was admitted on a football scholarship. He played under the name Lewis for the 1921 Hartford Senators in order to protect his amateur status; when Columbia found out, he was banned from intercollegiate competition for a year. The New York Yankees signed him following his sophomore year in 1923, and he made his major league debut in June, before being farmed back out to Hartford for the better part of the season. Gehrig shuttled between Hartford and the Yankees through 1924 before joining the club permanently for the 1925 season.

According to legend, Gehrig owed his position to Wally Pipp's headache; when Pipp begged off with a headache, Gehrig substituted for him and played so well the Pipp never made it back into the lineup. The raw facts, however, are flawed; Pipp would go down later that season after being beaned during batting practice, but not until after Gehrig had already replaced him. Gehrig's baseball talent was obvious, and he was the clear heir apparent at first base. He hit .369 with 37 home runs at Hartford in 1924, and manager Miller Huggins was looking for an excuse to get him into the lineup. With Pipp - and the Yankees - off to a miserable start to the 1925 season, Huggins decided on a radical roster shakeup on June 2nd, which included replacing Pipp with the big rookie slugger. It was not expected that Gehrig, who actually had pinch-hit for shortstop Pee Wee Wanninger the day before to start the streak, would play every game into the 1939 season, but it was expected that Gehrig would eventually play first base full time.

Gehrig's career gained momentum in 1926, as he began a streak of of thirteen consecutive seasons of 100 or more RBI; he batted .313 with 16 home runs, the latter which would stand as his lowest total in a full season. Batting fifth, he was on deck when Babe Ruth was caught stealing for the final out in the seventh game of the World Series, which the Yankees lost to the St. Louis Cardinals.

But it was the following year when he would break into stardom, as the Yankees put together arguably the greatest hitting lineup ever at that point in time, known as "Murderers' Row". 1927 was a magical year for the Yankees. They won 110 games - then an American League record - and lost 44, sweeping the Pittsburgh Pirates for their second World Championship. Babe Ruth topped his single-season home run record with 60 round-trippers, but he and Gehrig were neck-and-neck through early September. Now batting cleanup behind the Bambino, Gehrig would finish with 47 - almost thirty more than the third-best tally that year - and hit .373 with a then-record 175 RBI. With 109 walks, his on-base percentage was .474. His OPS was a gaudy 1.240. He was the natural choice for the American League Most Valuable Player Award. Players were only allowed to win the award once at the time, and Ruth had already received it in 1923. 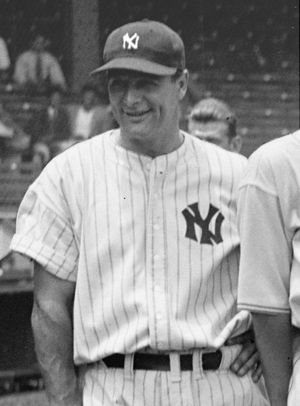 Among the feats achieved during Gehrig's peak years were the American League record for runs batted in, 184 in 1931, eight seasons with more than 200 hits, and the 1934 American League Triple Crown. His numbers for his Triple Crown year were .363/49/165. On June 3, 1932, in Philadelphia, he became the first major leaguer of the modern era to hit four home runs in one game (though the feat took second billing on the sports pages because long-time Giants manager John McGraw decided to announce his retirement that day). He also hit 49 home runs en route to the 1936 AL MVP award (repeat winners were allowed by then). That year he also set the single-season mark for most homers against one team, as he hit 14 long balls against the Cleveland Indians. He held the career record for grand slams - 23 - until being passed by Alex Rodriguez in 2013. After Ruth left the Yankees in 1935, Gehrig was named team captain. 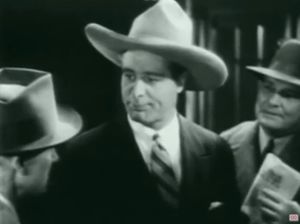 Gehrig in a cowboy hat in "Rawhide"

Gehrig appeared in the 1938 film Rawhide, playing himself. He leaves baseball to move to a cattle ranch in Montana. "Take it or leave it, I'm through with baseball" he tells a reporter. The film was made in January 1938, during the off-season. Watch it here.

Gehrig slipped slightly in 1938. He failed to hit .300 for the first time since 1925. His 29 home runs were his lowest total since 1928. He played in his 2000th consecutive game during the season and there were whispers the 35-year-old had lost a step. Even so, he did succeed in batting in over 100 runs, scoring over 100 runs, and recording 300 total bases, all for a record 13th consecutive year (each record has since been tied, but not broken). Manager Joe McCarthy ardently defended his captain: "The guy bats in 114 runs, and scores 115, which means he is responsible for around 200 of our runs, and everybody asks: what's the matter with him? Well, I wish I had more players on this club that would be so off in their play that they could give me 200 runs."

But perhaps the stress of playing every day was taking a toll; Gehrig had suffered from sporadic, incapacitating attacks of lumbago that forced him to be removed mid-game, after all, over the past few seasons. Or was it something else?

When Gehrig appeared at Spring Training in 1939, he was missing pitches that he would normally hit deep into the outfield. Something was indeed wrong with the Iron Horse. He asked out of the lineup after eight games, thus ending his streak at 2,130 games. At the time, he was hitting .143 without an extra-base hit.

Gehrig went to the Mayo Clinic in Rochester, Minnesota, where on June 19th, his 36th birthday, he received news of the grim prognosis: amyotrophic lateral sclerosis (ALS) - fatal, incurable paralysis. Conflicting evidence exists on how much he knew of the full extent of his illness. His wife, Eleanor, whom he married in 1933, wrote in her memoir, My Luke and I, that she read up on the disease and made doctors promise never fully to reveal to him that he'd basically been issued a death sentence (he'd told her he had a 50-50 chance to live). Gehrig, himself, was generally upbeat and optimistic about his prognosis in public, and correspondence between him and one of his doctors at Mayo indicate that the truth was usually sugar-coated for him, as was often the custom at the time - science was rapidly expanding, and he was led to believe the discovery of a cure was in sight. Several anecdotal accounts, however, indicate that, if anything, he was at least well aware of exactly what he was in for, if never explicitly told.

If one thing was for sure, he would never play baseball again ("chronic infantile paralysis" was the official explanation given to the press), and he announced his retirement upon his return from Mayo on June 21st. He would stay on the rest of the season as the honorary team captain, lumbering out of the dugout before each game to bring the line-up card to the umpires, and celebrated with the Yankees when they captured their fourth straight World Championship that October. He was even selected to the 1939 All-Star team as a "non-playing captain," a ceremonial nod to one of the game's most respected players.

But his finest moment came between games of a doubleheader on July 4, 1939, "Lou Gehrig Day". As former players (including Ruth and most of the 1927 team), government officials, and other VIPs showed up to pay tribute to baseball's fallen hero, Gehrig stood in front of an overflowing Yankee Stadium crowd and gave a speech often referred to as baseball's Gettysburg address: "For the past two weeks," he began, "you have been reading about a bad break. Today I consider myself the luckiest man on the face of the earth."

In December, Gehrig was elected to the Baseball Hall of Fame by unanimous resolution of a special committee - the only person ever to get in without any opposition. He is one of three players - Babe Ruth (part of the Hall's inaugural class) and Roberto Clemente (elected posthumously) are the others - to be elected to the Hall of Fame without the mandated waiting period.

The following year, Mayor Fiorello LaGuardia named Gehrig to the New York City Parole Board to help wayward youth. Gehrig worked when he could but his appearances at work decreased as the disease took hold.

On June 2, 1941, sixteen years to the day he replaced Wally Pipp at first base, Gehrig died at home in Riverdale, New York. His death was mourned by thousands. Eleanor received more than a thousand cards and letters. President Franklin D. Roosevelt sent his condolences. The following month, a monument was erected for Gehrig in Yankee Stadium, next to that of Miller Huggins. (Monuments were subsequently erected for Babe Ruth, Mickey Mantle, and Joe DiMaggio and were taken to the New Yankee Stadium in 2009.)

His body was cremated; his ashes reside at Kensico Cemetery in Valhalla, NY. He left no children.

After his death, Gehrig's life story was made into the movie The Pride of the Yankees, considered by many to be one of the greatest baseball movies. His uniform number, 4, was retired by the Yankees, the first number retired by any team.

In his memory, the Ivy League named the baseball division which included Columbia the Gehrig Division. The other is the Rolfe Division, in honor of Red Rolfe, a Yankee teammate, who went to Dartmouth College and coached at Yale.

The Lou Gehrig Memorial Award is given every year by his fraternity, Phi Delta Theta, to the major league player "who best exemplifies the spirit and character of Brother Lou Gehrig, both on and off the field."

In 2020, a bat used by Gehrig was sold at auction for $1.025 million. The bat had special significance as it was given by Gehrig to Hillerich & Bradsby so that it could serve as the master to supply him with "Louisville Slugger" bats after he joined the Yankees in 1924. There is speculation that he may have used that particular bat when he was still at Columbia. The previous August, one of his game-worn jerseys from 1937 had sold for $2.58 million.

An article in a medical journal in 2010 suggests that perhaps Gehrig did not suffer from "Lou Gehrig's Disease" after all. While it is impossible to perform a proper post-mortem analysis of the body (as it was cremated), some scientists now speculate that he suffered a form of progressive brain injury called Chronic Traumatic Encephalopathy. This would result from multiple concussions suffered when Gehrig played football in college, and also from being hit by baseballs. The symptoms of the disease mimic those of ALS, and the condition is mostly seen in pro football players, who suffer multiple concussions during their careers. [1]