Monument Park is a celebration of great New York Yankees players, located in the left field of New Yankee Stadium. Monument Park features three different sections. There is the wall of retired numbers, the wall of plaques and the monuments themselves. It was in the original Yankee Stadium and moved to the new ballpark in time for its opening in 2009.

As you first enter the area there is a large blue wall with each retired number written on it. The numbers are written on the wall in the order they were retired. The Yankees have retired 22 numbers, covering 23 players (two players are honored with number 8). After Major League Baseball universally retired Jackie Robinson's number 42, there was no designation for this in Monument Park, due to the fact Mariano Rivera still wore the number through the grandfather clause until his retirement. On September 22, 2013 the Yankees held "Mariano Rivera Day" and retired the number for Rivera while he was still active for a few more days; on that occasion, they also unveiled a bronzed 42 for Robinson in Monument Park. The Yankees have since retired the number 46 worn by Andy Pettitte, number 20 worn by Jorge Posada and number 51 worn by Bernie Williams during the 2015 season, and the number 2 worn by Derek Jeter in 2017. In 2022, rthey are slated to retire number 21, worn by Paul O'Neill.

Following that spate of retirement, the lowest number still available to be worn is number 11; all single-digit numbers (except for 0) have been retired. The Yankees have more retired numbers than any other major league team. 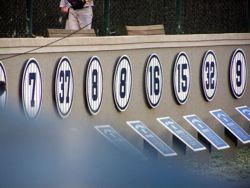 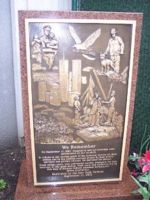 The last section of Monument Park is the wall filled with plaques dedicated to Yankee greats. There are currently 34 plaques in Monument Park. The plaques are dedicated to players, managers, owners, announcers and even two Popes who performed a mass at Yankee Stadium and South African President Nelson Mandela, in whose presence a large celebration was held at the ballpark soon after he was freed from jail.