Note: This page links to Bernie Williams, the longtime outfielder with the New York Yankees in the 1990s and 2000s. For the outfielder who played in the 1970s, click here. 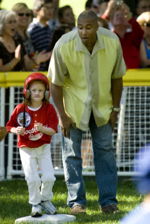 Bernie Williams was a 16-year veteran who was beloved by fans of the New York Yankees, for whom he played his entire career. A well-rounded player, he maintained a lifetime batting average of .297, with 287 home runs, and four Gold Gloves. He passed Don Mattingly to rank second on the all-time list for most doubles by a Yankee, behind only Lou Gehrig.

The Yankees were usually division winners during Williams' time with the team and therefore he appeared in 121 post-season games in his career, with 22 homers. Four of those Yankee teams were World Series winners. He collected 128 hits in postseason play; only long-time teammate Derek Jeter has more, although in Jeter's case, he reached the 200 mark in 2012, putting him miles ahead of anyone else.

He declined a non-roster invitation to the Yankees' 2007 spring training, bringing his career to an end. He did not consider playing for any other team. Then, in spite of not playing at all in 2008, Williams decided to come out of retirement to try to make Puerto Rico's roster for the 2009 World Baseball Classic. He therefore played in the Puerto Rican League and then was added to the Puerto Rican national team for the Classic as a back-up outfielder.

Based on the similarity scores, the most similar player (through 2008) is another long-time Yankee, Paul O'Neill.

He appeared on Seinfeld as himself. Post-baseball, Williams started a musical career. He was trained on classical guitar but developed an interest in blues and jazz. Signing with the Yankees at age 17, Bernie continued to pursue his musical aspirations, sometimes taking his guitar into the locker room, and practicing before games. In 2003, he fulfilled his ultimate dream of releasing his first album, The Journey Within. Bernie called it a celebration of his Latin musical roots, especially the salsa rhythms he heard while growing up in Puerto Rico. His 2009 album, Moving Forward, was nominated for a Latin Grammy award, demonstrating that this was not simply a vanity project. He was asked to perform at the 2019 Hall of Fame induction ceremony, at which long-time teammate Mike Mussina was one of the inductees.

In his first year of eligibility for the Hall of Fame in 2012, Williams finished first among all first-year players, but it was a particularly weak class. He received only 55 votes, good for 9.6%, enough to ensure his eligibility for at least another year. The reprieve was short-lived, however, as he fell to 3.3% in 2013 and was dropped from the ballot as a result, leaving his candidacy to be considered at some future date by the Veterans Committee. On May 24, 2015 the Yankees retired Williams' number 51 and dedicated a plaque to him in Monument Park.

He had played in the 1987 Caribbean Series, 1995 Caribbean Series and 1997 Caribbean Series; he led in slugging in 1995 and tied for the lead in homers that year. He made the Caribbean Baseball Hall of Fame in 2015 alongside Juan Gonzalez, Roberto Clemente, Hector Villanueva, Connie Marrero and Nap Reyes.

This article contains some text in the public domain, copied from the VOA article cited below.