Nap Reyes had a successful career as a player and manager in Cuba and the US and also played well in Mexico. 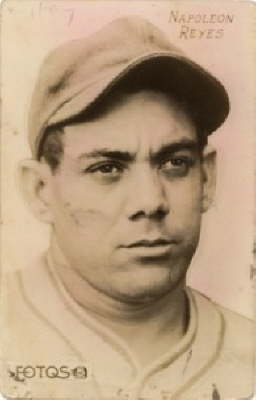 Reyes debuted professionally that winter in the Cuban Winter League and hit .319 while slugging .386. The Almendares infielder was 5th in the loop with 18 RBI and third in average behind only Silvio Garcia and Santos Amaro while he helped his team to a title. He made the CWL All-Star team at third base.

Reyes signed with the New York Giants and was assigned straight to their top farm team, the Jersey City Giants. He played mostly first base in 1942 and hit .241/~.287/.281, not good for a corner infielder. He did not hit any home runs in 370 AB.

Returning to Almendares, he helped them to another title by batting .323 and slugging .409. He finished 4th in the Cuban Winter League in average and was named to the All-Star team at second base.

In the 1945-1946 Cuban Winter League, Reyes began with Almendares before finishing with the title-winning Cienfuegos team. He batted .268 and slugged .335 while tying Frank Campos for the league lead with six triples. For the third time in three CWL seasons, he made the All-Star team - and at the third different position, being chosen at first base this time.

Reyes jumped to the Mexican League with other major leaguers in 1946 and had a great year, hitting .361/~.418/.515 with 11 triples and 75 RBI in 93 games for the Puebla Parrots. He led the Liga with 140 hits, was second in average (3 points behind fellow Cuban Claro Duany) and third in triples. He outhit teammate Bobby Avila, who was destined for greater fame.

For jumping to Mexico, Reyes was blacklisted by Organized Baseball like others who made that choice.

In the 1954 Caribbean Series, he managed Pastora de Occidente.

Reyes finished up as a player in 1954. Morristown folded after a 7-7 start and he wound up playing for half the league's teams that year, hitting .382 with 5 HR and 30 RBI. Had he qualified, he would have won the league batting crown. He also played for the Erie Senators and was one of their four managers that year. He hit .366 with one home run and 17 RBI in his time with Erie.

Reyes replaced Mike Guerra as manager of Marianao in the Cuban Winter League during the 1954-1955 season. In 1955-1956, he piloted the team to a 34-35 record. He replaced Reggie Otero as manager of the Havana Sugar Kings in early June of 1956. That year, he also scouted and signed Andrés Ayón for the Cincinnati Reds. In the winter of 1956-1957, Reyes led Marianao to a 40-28 record and their first Cuban Winter League pennant in 20 years. He then continued his success in the 1957 Caribbean Series, taking his team to the title.

Reyes managed Havana to a 72-82 record and sixth place in the International League. In the winter, he repeated his performance with Marianao as they won another title (43-32). He guided them to a win in the 1958 Caribbean Series for his second victory there, the first manager to win two consecutive Caribbean Series titles. No one else would do so for 60 years, until Luis Matos did it in 2017-2018.

When Havana moved to Jersey City, NJ and became the Jersey City Jerseys in 1960, manager Tony Castano resigned to remain in Cuba. Reyes replaced him as pilot of the team. They finished 76-77 and were 70-82 in 1961, their only full year as the Jerseys.