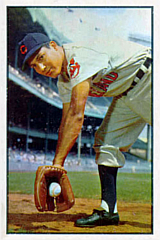 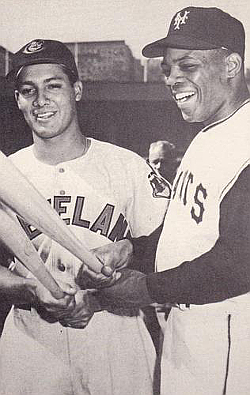 The greatest second baseman to emerge from Mexico, Bobby Ávila was a three-time American League All-Star. He won the 1954 AL batting title and was a key part of the Cleveland Indians squad that held the junior circuit record for wins in a season for many years. In the Mexican League, he nearly broke one of Cool Papa Bell's records while setting the record for walks in a season (later broken). He was an All-Star in the Cuban Winter League as well. He was president of the Mexican League after his playing career ended and entered politics, becoming the mayor of Veracruz. He was inducted into Mexico's Hall of Fame and had two stadiums named after him.

Bobby was a soccer player in his youth and was playing professionally by age 16. His father, a wealthy lawyer, discouraged Bobby from playing sports and tried to steer him into more intellectual pursuits. Devoting more time to baseball in high school against his father's wishes, the younger Ávila was heavily influenced by Baseball: Individual Play and Team Strategy, a book by Jack Coombs. He continued to reject his father's wishes when he joined a club in the winter Vera Cruz State League. [1]

By the age of 19, Bobby was playing regularly for the Mexican League, hitting .229/~.322/.276 for the Puebla Parrots. [2] In 1944, his production increased significantly as he hit .334/~.419/.472 and hit 14 triples, tying Carlos Galina for the league lead, one shy of Cool Papa Bell's league record. He was 6th in the Liga in batting average, between Wild Bill Wright and Jose Castro. [3] He played for the Mexican national team in the 1944 Amateur World Series. [4] Though he was not an amateur at this point, with two pro seasons under his belt, Mexico at this time was routinely using professionals in amateur-only events. The Cuban national team vigorously protested at times, forcing Mexico from the 1935 Central American and Caribbean Games due to using pros, though Mexico returned with some of the same players in the 1938 Central American and Caribbean Games and was allowed to play despite Cuba's protests. [5]

The next year, Ávila (known as Beto in Mexico) batted .350/~.450/.480, stole 25 bases and hit 10 more triples. He was in the top 10 in average again. [6] He then went to the Cuban Winter League but struggled with Almendares, hitting .216 and slugging .245 as their regular second baseman. [7] He was the 8th Mexican to play in the CWL. [8] In 1946, the level of competition in the Mexican League increased significantly as many Major League Baseball players were lured south due to large contracts offered by Jorge Pasquel. Ávila remained one of the best players in the circuit: at the age of 22, he hit .359/~.417/.490 and finished third in the league in batting, five points behind Claro Duany and two points behind teammate Nap Reyes. His 27 doubles were tied for second in the Liga (with René Monteagudo and Duany), one behind leader Roberto Ortiz, and he was also second with 138 hits, two behind Reyes. [9] His return engagement to Cuba proved much more successful as he hit .323 and slugged .417 for the Marianao Tigers. He was second in the CWL in average, .007 behind leader Lou Klein and .003 ahead of third-best Hank Thompson. His 13 doubles tied Andrés Fleitas for 3rd in the circuit and his 9 steals tied Klein and Lenny Pearson for 5th. He was named the league's All-Star second baseman. [10] That winter, Ávila turned down a $10,000 offer from Leo Durocher and also from legendary scout Joe Cambria. [11]

The next season, Beto again hit as well as any of the major league veterans - he chipped in a .346/~.444/.463 with 11 triples and 18 steals. He won the Mexican League batting title that year, the first native Mexican to lead the Liga in that category in a decade, beating out Santos Amaro by .005. [12] In 1947-1948, he starred for Cuba in the Cuban Players League, hitting .304 and slugging .353 while stealing 17 bases. He was 6th in average, between Avelino Cañizares and René González and second in swipes, two behind Héctor Rodríguez. He was named the All-Star second sacker. [13]

Shortly thereafter, Bobby signed with the Cleveland Indians after Cy Slapnicka offered him $17,500. [14] He was assigned to the Baltimore Orioles, where he struggled in 1948. He posted a .220/.307/.269 line in 56 games before the team found that he was being plagued by a hernia. His brother wound up operating on him back in Mexico. [15] As a bonus baby, he then spent time on the Indians' roster, riding the pine behind Joe Gordon. He made his major league debut as a pinch-runner for Hal Peck. [16] In fact, most of his action was as a pinch-hitter or pinch-runner. He did not get to bat until late May when, pinch-hitting for Al Benton, he was retired by Joe Dobson. His first hit did not come until July 21. Down 6-3 in the 8th against Chicago, he batted for Gene Bearden with the bases loaded and two out. Facing Bob Kuzava, he singled home both Larry Doby and Boudreau. Cleveland tied it but the White Sox rallied to win. [17] He only managed 15 plate appearances in 31 games, getting 3 hits in 14 at-bats, drawing a walk and scoring three runs. Unlike in Baltimore, he had someone he could communicate with as Mike Garcia spoke Spanish. [18] He ran afoul of manager Lou Boudreau for falling asleep on the bench (though Boudreau said he had never seen a rookie knowing the fundamentals so well) and asked Muddy Ruel how to stay awake when not playing; Ruel advised chewing tobacco as, if he began to nod off, the juice would go down his throat and wake him up. [19] 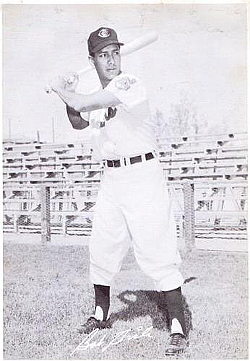 With Gordon slowing down in 1950, Ávila saw an increase in playing time, though he remained the backup. He hit .299/.390/.383 for a 102 OPS+ in 239 plate appearances, slightly ahead of Gordon's 99 OPS+. His first major league homer (and only one of the season) was a game-winner off Mickey Harris of the Senators. He was noted for his ability to withstand runners trying to break up double plays; Pat Mullin said "He's death on the double play". [20] When Gordon left after the season to manage in the Pacific Coast League, Cleveland GM Hank Greenberg questioned if Bobby could hit well enough to hold down the second base job (despite his 1950 performance), feeling he was certainly up to snuff defensively. [21] Manager Al Lopez figured he would give Ávila the chance and the move certainly paid off. He hit .304/.374/.410 with 76 runs scored, 10 homers and 60 walks (to 31 strikeouts) while fielding .982 for the 1951 Indians. He led the team in average and was among the 1951 AL leaders in batting average (8th, between Gil McDougald and Gil Coan), hits (165, 6th, between Ted Williams and Coan), steals (14, tied with Chico Carrasquel and McDougald for 4th), sacrifice hits (13, tied for 4th with Vic Raschi), caught stealing (8, tied for 5th with Eddie Joost), power/speed number (4th, between Joost and teammate Al Rosen), fielding percentage at second base (2nd, .005 behind Pete Suder), Defensive Wins Above Replacement (1.3, 6th, between Joost and Joe Tipton), Offensive WAR (4.1, 9th) and total WAR (4.8, 7th among position players, between Nellie Fox and McDougald). He was 10th in voting for the 1951 AL MVP.

Bobby made his first All-Star Game in 1952, starting at second base for the AL and hitting 7th. He grounded out against Curt Simmons in the 2nd. With a 1-1 tie in the 4th and two outs, he singled off Bob Rush to bring in Rosen. The AL lost, 3-2, in a game shortened by rain. On August 22, he had a chance for the 8th unassisted triple play in major league history but opted not to hog the spotlight. He caught a hard liner by Hank Bauer at the shoetops and stepped on second to double up Billy Martin. He could easily have tagged out Allie Reynolds, who was headed from first to second, but instead threw to Luke Easter to end the triple play. [22] He hit .300/.371/.415 for the 1952 Indians with 102 runs scored, 11 triples and 67 walks. He was 8th in the 1952 AL in average, 2nd in at-bats (597, 51 behind Fox]), second in runs (two behind Larry Doby), 2nd in hits (179, 13 behind Fox), tied Gus Zernial for 8th in total bases (248), tied for 10th in doubles (26), 1st in triples (1 ahead of Harry Simpson, Fox and Phil Rizzuto), tied Elmer Valo for 6th in steals (122), 2nd with 19 sacrifice hits (4 behind Rizzuto), tied Jackie Jensen for 9th in double-play grounders (19), tied Pete Runnels and Johnny Groth for 3rd in caught stealing (10), was 6th in power-speed number (between Bauer and Doby), was the 9th-hardest batter to fan (1 K/16.6 AB, between Dave Philley and Clint Courtney), tied Joost for 3rd in assists regardless of position (431) but also tied Ray Boone and Joost for the most errors in the league (28, leading second basemen). He was 7th in WAR by position players (4.7, between Ferris Fain and Bauer) and 5th in Offensive WAR (5.2, between Berra and Joost, easily leading second basemen) as his defense brought him down that year.

Beto hit .341 in 1954 and became the first Latino player to win a major league batting title. He did it despite breaking his thumb at one point after Hank Bauer slid into him at second base. He finished the season with career bests in average (.341), OBP (.402), home runs (15), runs scored (112) and RBI (67). The Sporting News elected him player of the year as the Tribe steamrolled the rest of the American League, finishing with a 111-43 record and a date with the New York Giants in the World Series. Their ownership of the AL did not translate to a world championship, as the Giants swept in four games. Bobby managed just two singles in 15 plate appearances in the Fall Classic. He made his final All-Star appearance in 1955, falling to a .272 average with 13 homers and 61 RBI as the Indians returned to the middle of the pack. He dropped off precipitously in 1956, batting just .224 in regular duty, and began his slow descent out of a starting job and eventually the big leagues with follow up tough seasons in 1957 and 1958. He played for three teams in his final big league season: the Baltimore Orioles, Boston Red Sox and Milwaukee Braves, batting .227 in 93 games.

In 1960, a 36-year-old Ávila returned to the Liga and hit .333/~.486/.486 for the Mexico City Tigers, leading the league in runs scored (125 in 127 games) and shattering the Liga walk record with 124, 29 more than Ronnie Camacho had drawn a season earlier. Ávila's walk record stood 9 years before Hector Espino broke it by one. Overall, Ávila hit .329/~.430/.451 in 6 years in his homeland. After retiring, he became an owner in the Liga, president of the Veracruz Eagle and eventually president of the Mexican League. He later went into politics and was elected mayor of Veracruz. Two Liga stadiums were later named after Avila - Estadio Beto Avila and Parque Beto Avila

He was elected to the Salon de la Fama in 1971 and was one of the original inductees to the Latino Baseball Hall of Fame in 2010. He died in 2004 of complications of diabetes and a lung ailment at the age of 80.