Note: This page is for 1950s outfielder Jim Busby; for the 1930s infielder, click here. 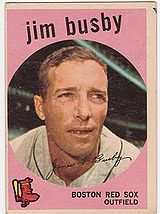 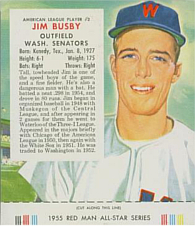 “That guy there catches singles off his shoetops and steals second base on pitchouts.” - Casey Stengel

Outfielder Jim Busby was best known for his speed and defense during a 13-year big league career.

Busby, the fourth cousin of Kansas City Royals pitcher Steve Busby, served three years in the Army during World War II and attended TCU, where he played football and baseball. On the gridiron, he played quarterback in the 1945 Cotton Bowl, while on the diamond, he led the Southwest Conference with a .509 average as a junior. After signing with the Chicago White Sox, he made his debut with Waterloo White Hawks of the Three-I League on June 25, 1948 and notched five hits in his first two games. He reached the majors in 1950, appearing in 18 games for the Sox.

In his first full big league season, 1951, Busby hit .283 with 68 RBI and 26 stolen bases to earn a spot on the American League All-Star team. Early the following year, he was traded to the Washington Senators for Sam Mele. He had his finest season in 1953, hitting .312 with 82 RBI, and followed with a .298 average and 80 runs driven in the next year. After 1954, playing with six different teams, his career numbers steadily faded until his retirement in 1962. In June 1955, he was traded back to the Sox, who sent him to the Cleveland Indians for Larry Doby after the season. Busby only hit .235 with the Indians in 1956 but had a career-best 12 homers that year. On July 5th and 6th, he became the fourth American League player to hit grand slams in back-to-back games. He ended his playing career with stints with the Baltimore Orioles and Boston Red Sox and as an original member of the expansion Houston Colt .45s in 1962. In the later days of his career, he was a player/coach for Baltimore in 1961 and Houston in 1962.