Inducted into Hall of Fame in 1966

"I had many years that I was not so successful as a ballplayer, as it is a game of skill." - Casey Stengel

Casey Stengel was an above-average ballplayer who later became a great manager. He was also famous for his quotations (some of which appear below).

As a player, Stengel played for five teams in a 14-year career. Although he became famous later in life as an American League manager, his whole career as a player was spent in the National League. He broke in with the Brooklyn Dodgers, and greatly admired teammate Zack Wheat's ability. He was three years younger than Wheat. Jake Daubert was also on the team.

Stengel's best year in baseball was 1914 with Brooklyn, when he was fifth in the league in batting, first in on-base percentage, and seventh in slugging. He had spent the spring of 1914 as the baseball coach at the University of Mississippi. In 1916, Brooklyn won the pennant, but lost the World Series 4 games to 1. In Brooklyn's only win of the Series, Stengel batted third in the lineup, behind Daubert and ahead of Wheat.

In 1918, he left Brooklyn, and although he was to play eight more years, in only two of those eight years did he play in 100+ games. He was with the Pittsburgh Pirates and Philadelphia Phillies first, but landed with John McGraw's New York Giants towards the end of the 1921 season.

As a part-time player, he played on the Giants teams that won the World Series in 1921 and 1922, and continued to win the National League pennant in 1923. While not appearing in the Series in 1921, he hit over .400 in both the 1922 and 1923 Series. He hit game-winning home runs (one inside-the-park) to win the 2 games that the Giants won in the 1923 Series. He holds the distinction of hitting the first World Series home run ever hit in Yankee Stadium, which opened in 1923.

In 1924, he was a regular player again with the Boston Braves of the National League, and then played until May 19 in 1925 as his major league playing career ended. When the Braves bought the Worcester Panthers of the Eastern League on May 22, Stengel was sent to the team as president and manager, beginning the managing phase of his career.

Stengel was a player/manager for the Worcester Panthers for most of 1925. He then spent 1926-1931 in the same role with the Toledo Mud Hens. The 1927 team finished first in the American Association.

Although he is most famous for managing the New York Yankees, he actually started his major league managing career with two of his old teams, Brooklyn (1934-1936) and Boston (1938-1943), never finishing higher than 5th in the league, before coming to the Yankees in 1949. Stengel also managed for years in the minors, mostly in Toledo (his team won the Junior World Series in 1927) but also in Milwaukee and Worcester - and, most famously, in Oakland.

Immediately prior to managing the Yankees, he was manager of the minor league Oakland Oaks in their legendary 1948 season. That was the year that the "Nine Old Men", including Ernie Lombardi and Nick Etten, won the league championship and the Governor's Cup. In 2008 he was elected to the Pacific Coast League Hall of Fame.

He won the World Series in each of the first five years (1949 to 1953) while he managed the Yankees, an all-time record for both managers and players. Although he is best known as the manager of Mickey Mantle, Whitey Ford, and Yogi Berra, he had a constantly changing roster other than his few core players, and even Mantle and Ford were not on the team when he first won the Series in 1949. 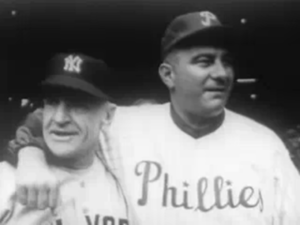 Stengel (left) with Eddie Sawyer before the 1950 World Series.

Oddly enough, his winningest year as a manager was in 1954 when the Yankees won 103 games, but finished 8 games behind the great 1954 Cleveland Indians team of that year.

He finished his managerial career with the expansion New York Mets, and it was from that time when most of his quotations came. The Mets finished last each year for him and were historically dreadful in their maiden 1962 season. Stengel was forced to retire from the Mets' dugout in mid-year in 1965 after he broke his hip in a fall. He was 76 at the time. The next year, Stengel was elected to the Hall of Fame as the Hall created a rule known as the Casey Stengel Rule, allowing him to be elected immediately because of his age.

He used his baseball earnings to buy a bank, and served late in life as the bank president, deciding on loans and other banking matters.

Stengel was famous for his quotations, which often featured convoluted and obfuscating language reporters dubbed "Stengelese":

"Being with a woman all night never hurt no professional baseball player. It's staying up all night looking for a woman that does him in."

"Can't anybody here play this game?"

"No, even my players aren't players."

"We are in such a slump that even the ones that aren't drinkin' aren't hittin'."