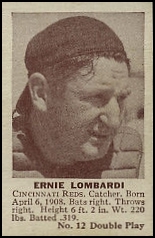 Inducted into Hall of Fame in 1986 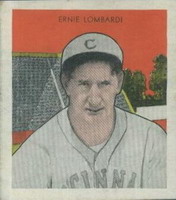 "He was the best righthanded hitter I ever saw. And he was an exceptional player in every way except running. If he hadn't been so slow, he would have had an even better batting average." - Harry Craft

"You almost come to the conclusion that he was the greatest hitter of all time. Every hit he made . . . was an honest one." - sportswriter Arthur Daley

Ernie Lombardi played seventeen years in the majors and consistently impressed with his bat and throwing arm. He was also famous for his long nose, getting nicknamed "Schnozz", and as he aged he became perhaps the slowest runner in baseball history. He never played any position but catcher in the majors, and caught Johnny Vander Meer's back-to-back no-hitters.

Lombardi began his professional career with the Oakland Oaks at age 18, and was with them for several years, hitting over .360 several times. He also spent some time with Ogden.

Once in the majors, he spent his whole career in the National League, coming up originally with the 1931 Brooklyn Robins. Al Lopez, one year younger, was the first-string catcher for the Robins that year.

The next season, Lombardi was traded to the Cincinnati Reds, where he was to spend ten years and achieve his greatest fame. He was the 1938 MVP, leading the league in batting, and was named an All Star each year from 1936-40. He played in the 1939 and 1940 World Series - and was involved in the celebrated play in the 1939 World Series called "Ernie's Snooze" when Charlie Keller slid home and perhaps in making contact with Lombardi temporarily knocked him out. Lombardi later said that it was very hot and he was dizzy.

Ernie had a bit of an off-season in 1941 and the Boston Braves bought him for the 1942 season, when he was 34. He won the batting title for them (it would be 70 years until another NL catcher, Buster Posey, would win a batting championship) and was named to the All-Star team again, but was traded in early 1943 to the New York Giants, where he spent his last five major league seasons.

He was named to the All-Star team twice while with the Giants, and even in his last major league season, at age 39, was able to hit .282 and slug .436 for manager Mel Ott.

As a catcher, Lombardi usually had fewer than 400 at-bats in a season, never reaching 500 in any one year. As a result, he never scored nor drove in 100 runs in any one season. His Adjusted OPS+, however, is exactly the same, 125, as that of Yogi Berra and one point below that of Gabby Hartnett.

The Hall of Fame voters, however, did not give him many votes, with his best percentage being 16.4% of the vote. He finally was elected to the Hall almost a decade after his death.

With the Oakland Oaks and after his playing days[edit]

After his last year in the majors, he went to the Oakland Oaks (where he had played prior to coming to the majors) and became one of the legendary "Nine Old Men" who helped manager Casey Stengel lead the team to the pennant. In 2003 he was elected to the Pacific Coast League Hall of Fame.

In later life he became a press-box attendant at Candlestick Park.

Highlighted in Heroes Behind the Mask as one of the top catchers of all-time.