"He wasn’t signed. He was trapped.” - teammate Lefty Gomez, recognizing that Keller was both strong and hairy

Charlie Keller, known as "King Kong Keller", is remembered as part of an outfield that is sometimes considered to be the greatest ever, when he played alongside Joe DiMaggio and Tommy Henrich. New York Yankees fans adored them, while fans of other teams often hated them. Keller might possibly have made it into the Hall of Fame if his career had not been troubled by chronic back problems. 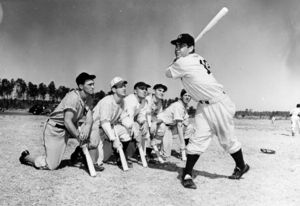 Keller was a stand-out player in a short time in the minor leagues. He began his professional career by winning the Minor League Player of the Year award from The Sporting News after hitting .353 with 13 homers and 88 RBI for the Newark Bears, helping the 1937 Bears become one of the greatest minor league teams ever. He led the International League in average, runs (120), triples (14) and hits (189). A year later, with no openings in the Yankee outfield of DiMaggio, Henrich and George Selkirk, King Kong returned to Newark and did even better. He hit .365/~.465/.569 and paced the IL in hits (211), runs (149), walks (108) and OBP. He was second to Buddy Rosar in average, second to Ollie Carnegie in RBI (129), struck out just 56 times, was third in the league in homers (22) and had 15 outfield assists.

Keller appeared in 111 games as a major league rookie in 1939, hitting .334 with 81 walks, giving him an on-base percentage of .447, and had a slugging percentage of .500. As a rookie, his batting average was fifth in the American League (DiMaggio was first) and his on-base percentage was fourth in the league (one point behind DiMaggio's .448). The 1939 Yankees have been called the best team of all-time by some prominent sources, such as the book Baseball Dynasties.

In 1941, DiMaggio's big year with the hitting streak, Keller had 33 home runs (his career high), with 10 triples and 122 RBI. He had a .298 batting average with 102 walks, for a .416 on-base percentage and a .580 slugging percentage. On the All-Star team again, he was fifth in the MVP voting. He was in the top five in both on-base percentage and slugging percentage. He was second in the league in home runs and third in the league in RBI.

Coming back for 44 games in 1945, he hit 10 home runs with a .301 average, a .412 on-base percentage, and a .577 slugging average. Both the on-base percentage and the slugging percentage would have led the American League if he had had enough plate appearances to qualify.

In 1946, as regular players returned after the war, Keller hit 30 home runs with 101 RBI. He added 10 triples and 101 walks. Named to the All-Star team once more, he was again in the top three in the league in on-base percentage and slugging percentage, as well as in triples, home runs, and walks. It was, unfortunately, to be his last full season. He was only 29 years old.

In 1947, he appeared in only 45 games with a .238 batting average. However, he produced value with a .404 on-base percentage and a .550 slugging percentage. Those percentages would have been in the top three in the league if he had had enough plate appearances to qualify. In 1947 he was named as part of the inaugural class of the International League Hall of Fame.

In 1948 he appeared in 83 games, and his hitting slipped. In 1949 he appeared in 60 games, and was released by the Yankees after the season ended. He joined the Detroit Tigers, as a bench player, appearing in 50 games with 51 at-bats in 1950, hitting .314 with a .453 on-base percentage and a .569 slugging percentage. Those great numbers represented his last hurrah in the majors. The next year, 1951, he didn't perform as well for the Tigers in 62 at-bats, and was released after the season. He came back in September 1952 for one final at-bat (a strikeout) with the Yankees, and his career was over.

He appeared in four World Series, hitting .306 and slugging .611 with five home runs. The Yankees won three of those four Series. He appeared in five All-Star Games.

After retiring from the majors, Keller was a Yankees coach in 1957 and 1959. He was also a horse breeder in Maryland. Keller's brother Hal Keller was a major league catcher and later GM of the Seattle Mariners and his son Charlie Keller Jr. played in the minors.