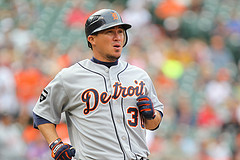 Magglio Ordonez was a good-hitting outfielder who had his best major league season in 2007, winning the American League batting title.

In the minors for six years (1992-97) he hit over .300 only once, in 1997, although he typically showed some moderate power. He was left unprotected by the Chicago White Sox after the 1996 season, and could have been selected by any team in the 1996 Rule V Draft. He was not, and soon became a star in Chicago. 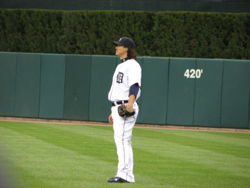 He broke in during the 1997 season, became a regular in 1998, and was a key player on the division-winning 2000 team. After injuries in 2004, he signed as a free agent with the Detroit Tigers, thus missing the championship season of the 2005 Chicago White Sox, but playing on the 2006 Detroit Tigers team that went to the World Series.

On August 12, 2007, Ordóñez hit two home runs in a 8-run second inning against Dallas Braden. He joined Al Kaline as the only members of the Detroit Tigers to hit two homers in a single frame. Ordonez holds the record for most hits in a season without hitting a triple. In 2007, he collected 216 hits - not one of which went for three bases.

Magglio continued to play full time for the Tigers in 2008 and 2009, and both years hit over .300. He hit 21 homers and drove in 103 runs the first season, but saw his power drop to 24 doubles and 9 homers in 2009, showing that age was catching up with him. In 2010, he hit .303, but was limited to 84 games. His power stroke recovered a bit, with 12 homers and 59 RBI, both numbers higher than what he had amassed in full-time play the following season. His progress was slowed by a broken ankle sustained in July, however, and the injury would continue to bother him the following season.

He continued to miss chunks of playing time in 2011, playing 92 games during which he went to bat 329 times. His .255 batting average was by far the worst of his career (he had hit .282 in 1998, his first full season), and his 10 doubles and 5 homers were very few for a corner infielder; he did finish the season on a high though, hitting .365 after August 13th, coinciding with the team's late-season surge. The Tigers won the AL Central title and he got to play in the postseason for the third time. In what was his last hurrah on the field, he went 5 for 11 with a double as the Tigers upset the New York Yankees in the ALDS, then drew a walk in 3 plate appearances in his only game in the 2011 ALCS facing the Texas Rangers. A free agent after the season, he found little interest for his services, and on March 26, 2012, with spring training winding down, he advised his fans that he was "very close to retirement". That came a few days after teammate and countryman Carlos Guillen had announced his own retirement from the Tigers, turning the page on an era that had seen the Bengals rise from worst team in baseball to a power in the AL Central. On June 3rd, Ordonez officially announced his retirement and was honored before that day's Tigers game against the Yankees.

In 2013, he announced his candidacy as mayor for Puerto la Cruz, Anzoátegui on the Socialist Party ticket. He became eligible for the Hall of Fame in 2017 but received only three votes and was dropped off the ballot. He has also been owner of the Caribes de Anzoátegui.