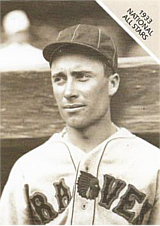 "For four years, Wally Berger had been the Braves' only true claim to fame. Berger could do everything, but his real strength was his big bat... no matter how badly the Braves were doing, Berger, single-handed, could keep some customers coming in." - Al Hirshberg, from the book The Braves, The Pick and the Shovel

"I never thought of records, I just liked to hit." - Wally Berger

Wally Berger was a major star in the 1930s. He set the record for the most home runs by a rookie when he hit 38 for the Boston Braves in 1930; this was tied by Frank Robinson in (1956) before being erased by Mark McGwire in 1987, but it remained the National League mark until surpassed by Cody Bellinger in 2017. It took him just 51 games to reach 20 home runs, which was also a major league record until tied by Gary Sanchez in 2016, and then surpassed the following season by Bellinger, who hit both his 20th and 21st homers in his 51st game in 2017. Berger also held the Braves' record for fastest 10 homers, in 29 games, but that was bested by Austin Riley, who took 26 games to reach the mark in 2019. Of course, Berger's marks were set at a time when homers were hit a lot less frequently.

From 1930 to 1936, Wally was one of the top bats in the game, batting .304 with an average of 91 runs scored, 34 doubles, 27 home runs and 103 RBI in that seven year stretch. He appeared in the first four All-Star Games (1933 to 1936), starting in center field in the inaugural contest for the National League. In 1935, he led the senior circuit in home runs (34) and RBI (130) while batting .295/.355/.548. His career was shortened as a result of injuries suffered in 1936 and 1937, and though he was able to reach double digits in home runs the next three seasons, he was unable to play more than 115 games in a season again. The peak of his career was spent with the mostly non-competitive Braves, but he eventually played in a couple of World Series with the New York Giants in 1937 and the Cincinnati Reds in 1939. Still, Berger's lifetime Adjusted OPS puts him in the top 100 of all-time, tied with Will Clark and King Kelly and one point below Reggie Jackson, and he finished with an impressive 242 home runs in eleven seasons, only the first seven as a full-timer.

Berger played high school ball on the same Mission High School team as Joe Cronin. Before coming to the majors, he played for many years in semi-pro and minor league ball. After his playing days, he was a scout for the New York Giants in 1947 and 1948. He also managed in the minors in 1949 and 1950 as well as doing some scouting for the New York Yankees. He returned to California in 1950, where he worked for the Northrop Corporation until his retirement in 1975. He died at age 83 of a stroke.