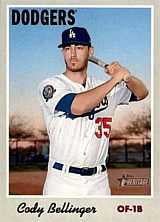 The son of major leaguer Clay Bellinger, first baseman Cody Bellinger was selected by the Los Angeles Dodgers in the fourth round of the 2013 amateur draft. He signed for a $700,000 bonus and made his pro debut with the AZL Dodgers on June 20th. He hit .210 in 47 games with a homer and 30 RBI. In 2014, he split his time between the AZL Dodgers and Ogden Raptors, hitting a combined .312/.352/.474 in 51 games. He followed that in 2015 with an outstanding performance with the Rancho Cucamonga Quakes of the California League. At only 19, he played 128 games and hit .264 with 33 doubles and 30 homers, scoring 97 runs and driving in 103. He continued his progression in 2016, playing mainly in Double A with the Tulsa Drillers of the Texas League. In 114 games, he hit .263/.359/.484 with 23 homers and 65 RBI while still being much younger than the average player in the circuit. He also had a brief taste of Triple A with the Oklahoma City Dodgers and was not at all intimidated, going 6 for 11 with 3 homers.

Having established himself as one of the Dodgers' top prospects, Cody was called up to The Show on April 25, 2017, and immediately inserted in the starting lineup in left field. Batting eighth against the San Francisco Giants, he went 1 for 3 with a walk in his debut. Injuries to Joc Pederson and Franklin Gutierrez were behind his being called up ahead of schedule; he was batting .343 with 5 home runs, 4 doubles and 7 RBI in 18 games for Oklahoma City at the time. He hit his first two major league homers in the same game April 29th, his first coming off Zach Eflin in the 7th and the second as part of three consecutive long balls off Hector Neris in the 9th, part of a four-run inning that gave Los Angeles a 6-5 win over the Philadelphia Phillies. On May 28th, he connected for his 10th homer since his call-up in a 9-4 win over the Chicago Cubs. In doing so, he became the fastest player in Dodgers history to reach double figures in homers for his career, doing so in his 31st big league game. He was leading the team in home runs at that point despite his belated start and he was named the National League Rookie of the Month for May as a result. On June 2nd, he homered in the 12th inning off Neftali Feliz of the Milwaukee Brewers for the margin in a 2-1 win, ending a game in which the Dodgers set a team record with 26 strikeouts and both teams combined for a National League record 42. As the 12th homer of his career, he now had the same number as his father, who had taken 183 major league games to reach the mark. With a pair of homers on June 19th, he reached a total of 21 for the year, making him the fastest player in major league history to the mark, in 51 games. Even with his belated start to the season, he was now leading the NL in homers. The previous holders of the mark for the most homers in their first 51 games were Wally Berger and Gary Sanchez with 20, Sánchez having tied the mark just the previous year. On June 25th, his sixth two-homer game of the season gave him 24 long balls for the year and put him one multi-homer game behind the rookie record set by Mark McGwire in 1987. The two long balls came in a 12-6 win over the Rockies - the Dodgers' 10th straight win - and his power hitting was the main reason they were the hottest team in the league at that point. He repeated as Rookie of the Month in June, having batted .286 with 13 homers and 27 RBI during the month. The 13 homers set a National league mark for most homers in a month by a rookie, one that would be beaten two years later by Aristides Aquino.

Not surprisingly, Bellinger was named to the All-Star team. After participating in the 2017 All-Star Game and Home Run Derby, he became the first rookie in Dodgers history to hit for the cycle in a 7-1 win over the Miami Marlins on July 15th. He singled in the 1st, hit a two-run homer in the 3rd, a double good for another run in the 4th and completed the feat with his second career triple off Nick Wittgren in the 7th. On August 19th, he turned his ankle while making a catch in right field at Comerica Park in a game against the Detroit Tigers and had to miss a few games before being placed on the disabled list on August 22nd. He returned August 30th and, by connecting for long balls on September 2-3, he pushed his home run total to 36, breaking the Dodgers rookie record set by Mike Piazza in 1993. On September 22nd, his 39th homer made him the sole holder of the National League rookie record, which had been shared by Wally Berger and Frank Robinson. He finished the year at .276 in 132 games, with 39 homers and 97 RBI. In the postseason, he homered once in each round in which the Dodgers played, including hitting .318 with a pair of doubles in the win over the Chicago Cubs in the NLCS. In the World Series, he struck out 17 times while walking just once, going 4 for 28 as the Houston Astros' pitchers attacked him relentlessly with breaking balls and he was unable to adjust. After the season, he was voted the unanimous winner of the NL Rookie of the Year.

He started the 2018 season well, cutting down his strikeouts, raising his batting average and smoking a lot of extra-base hits even if his home run percentage was down a bit in April. On April 29th, he was benched in the middle of a game against the San Francisco Giants by manager Dave Roberts for lack of hustle. What Roberts had not liked was that he had to settle for a double on a ball hit to the wall after taking his time out of the batter's box on what should have been, in Dave's opinion, an easy triple; he then aggravated his case by being doubled off the bag on a line drive and, an inning later, was replaced at first base by Max Muncy. He did not miss much action, as he played 162 games that season, most in the NL. He did sit out one game as the Dodgers played a total of 163 games, the result of needing a one-game playoff against the Colorado Rockies to determine the winner of the division title, a game the Dodgers won. He hit .260 with 25 homers and 76 RBI while splitting his time mainly between first base and center field. In the postseason he was shut down, going 0 for 11, in the Dodgers' win over the Atlanta Braves in the Division Series, but then was named the MVP of the NLCS as he had 5 hits, 3 runs scored, a homer and 4 RBI in L.A.'s defeat of the Milwaukee Brewers in a tightly-fought seven-game series. In his return to the World Series he again struggled, going 1 for 16, as the Dodgers went down in five games against the Boston Red Sox.

On March 30, 2019, he had one of the best games of his career in an 18-5 beatdown of the Arizona Diamondbacks, as he went 4 for 6 with 2 homers and 6 RBI. One of the long balls came against John Ryan Murphy, a position player pitching mop-up relief. It was part of a great start to his season, as he hit 5 home runs and had 12 RBI in his first 6 games. His slugging ways continued as the month went on, as on April 26th, he homered and singled in a 6-2 win over the Pittsburgh Pirates. That gave him 13 homers and 88 total bases, the latter figure a new record for March and April. Former teammate Chase Utley had set the previous record, with 85 total bases in March and April of 2008. He also broke Matt Kemp's team record for most home runs during the period and his 33 RBI were the second most by a Dodgers player in 28 games, only trailing the 37 collected by Ron Cey in 1977. He was, at that point, leading the majors in hits, runs scored, batting average and slugging percentage and was tied with Christian Yelich for the home run lead. He hit his 14th homer on April 28th in another win, this one 7-6 over the Pittsburgh Pirates, tying the record for most before May 1st, with Albert Pujols, Alex Rodriguez and Yelich also having reached that total. Not surprisingly, he was named the National League Player of the Month for April, his first time winning the honor. He kept up the production in May and, on May 27th, he achieved another amazing feat when, in a 9-5 win over the New York Mets, he not only hit his 19th homer of the season, but also threw out two baserunners from the outfield, Michael Conforto at home in the 1st and Carlos Gomez at third base to complete a double play in the 8th in a play worthy of highlight reels. He was named a starter in the 2019 All-Star Game, then on July 3rd had a two-homer game including a walk-off blast off Yoan Lopez in the 10th inning to lead the Dodgers to a 5-4 win over the Diamondbacks. It was the fifth straight walk-off win by the Dodgers at home (they had played 7 road games in the interim) and Bellinger's stat line showed a .345 average, 29 homers and 70 RBI with half of the season still to play!

On August 2, 2019, Cody took San Diego's Eric Lauer deep for his 100th career home run. He became the fastest Dodger in history to reach 100 bombs, doing so in his 401st game, surpassing Hall of Famer Mike Piazza in the Dodger record books once more (Piazza having reached 100 in 422 games). Almost two weeks later, on August 15, he became the youngest Dodger in history to reach the 40 home run plateau. He finished the season with new career bests in batting average (.305), home runs (47) and runs batted in (115), as well as leading National League right fielders in defensive runs saved with 19. Bellinger was rewarded for his spectacular season with the 2019 National League Most Valuable Player Award at season's end, beating out the Brewers' Christian Yelich. He also became the 5th Dodger in history to win a Gold Glove and a Silver Slugger in the same season. He was eligible for salary arbitration after the season but, on January 10, he reached a deal with the Dodgers on a one-year contract worth $11.5 million, thus avoiding a hearing. It was the largest deal signed by a player eligible for arbitration for the first time, eclipsing that signed by Kris Bryant two years earlier, which had been for $10.85 million.

In addition to his father, Cody's brother, Cole, was drafted out of high school by the San Diego Padres in the 15th round of the 2017 amateur draft.