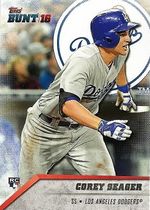 The brother of Kyle Seager, infielder Corey Seager was selected by the Los Angeles Dodgers in the first round of the 2012 amateur draft with the 18th overall selection. He signed for a $2.35 million bonus and made his pro debut with the Ogden Raptors on July 6th. he hit a solid .309/.383/.520 in 46 games with 9 doubles, 8 homers and 33 RBIs. In 2013, he started the year with the Great Lakes Loons of the Midwest League, then at the beginning of August was promoted to the Rancho Cucamonga Quakes of the California League, he hit a combined .269/.351/.473 in 101 games, with 20 doubles and 16 homers. He scored 55 runs and drove in 72.

He was back at Rancho Cucamonga to start 2014, but earned another mid-year promotion, this time reaching AA with the Chattanooga Lookouts of the Southern League. He had an outstanding season for the two teams, as he hit .352 in A ball and .345 in AA. His combined batting line in 118 games was .349/.402/.602 with an amazing total of 50 doubles, to go with 5 triples and 20 homers. He scored 89 runs and drove in 98. He was selected to play in the 2014 Futures Game and was named MVP of the California League as well as making the circuit's All-Star team at shortstop. heading into 2015, Baseball America named Corey the #5 prospect in baseball. He continued to impress that year by starting the season hitting .375 and slugging .675 in his first 20 games for the Tulsa Oilers, the Dodgers' new AA affiliate in the Texas League. He was obviously too good for that level, and on May 1st, he made his AAA debut with the Oklahoma City Dodgers of the Pacific Coast League. In 105 games, he hit .278/.332/.451, giving him a total of 37 doubles and 18 doubles on the year with his month of scorching hitting with Tulsa added in.

Seager earned his first promotion to the big leagues at the beginning of September, 2015. He made his debut on September 3rd, starting at shortstop for the Dodgers against the San Diego Padres and went 2 for 4 with a double, two runs scored and 2 runs batted in in a 10-7 loss. When starting shortstop Jimmy Rollins was hurt a couple of days later, Corey took over for him for the remainder of the month and played well, hitting .337 with 4 homers and 17 RBIs in 27 games. His first homer came against Josh Collmenter of the Arizona Diamondbacks on September 12th, which was also his first four-hit game in the big leagues, and he finished the year by going 3-for-3 with a homer in a 6-3 win over the Padres on October 4th. He then started four of the Dodgers' five games at shortstop against the New York Mets in the NLDS, with Rollins getting the nod in Game 3. Like the rest of the team, however, he found the going tough, as he was limited to 3 hits in 16 at-bats (.188) with no homers or RBIs.

Heading into the 2016 season, Corey was named the #1 prospect in baseball by mlb.com. Rollins had become a free agent after the 2015 season, and the Dodgers had not tried to re-sign him, virtually handing the starting job to their young phenom. He faced a setback in spring training however when he suffered a sprained knee ligament, forcing him to take unanticipated rest but he was ready for opening day. He had hits in his first 8 games, including a three-hit game on April 5th, getting off to a strong start. On May 15th, he had his first multi-homer game in a 5-2 loss over the St. Louis Cardinals. On June 3rd, he had a three-homer game, again all solo shots, but this time the long balls led the Dodgers to a 4-2 win over the Atlanta Braves. The first two homers came off Julio Teheran and the last against Hunter Cervenka in the 8th. He was the first Dodgers rookie to have a three-homer game since Don Demeter in 1959. He was named the National League Rookie of the Month for June after hitting .343 with 8 doubles and 8 homers in 28 games. He also scored 20 runs and drove in 13. He was named to the 2016 All-Star Game, becoming the second straight Dodgers rookie to make the mid-summer classic, following Joc Pederson in 2015. On August 8th, he hit a pair of homers in a 9-4 win over the Philadelphia Phillies that brought his season's total to 21. It set a new record for homers by a Dodgers shortstop, passing Hanley Ramirez, and made him the 8th rookie in Los Angeles history to hit 20 or more homers. He finished the season at .308 with 26 homers and 72 RBIs in 157 games. In the postseason, he hit a pair of 1st-inning homers against the Washington Nationals in the NLDS, helping to pace the Dodgers to victory, then went 6 for 21 (.286) in the NLCS as the Dodgers lost to the Chicago Cubs. He was the unanimous winner of the 2016 National League Rookie of the Year Award and also won a Silver Slugger Award as the National League's best-hitting shortstop.

On June 20, 2017, he temporarily grabbed the headlines from rookie teammate Cody Bellinger, who was setting records for the quickest player to hit 20 homers, when he had the second three-homer game of his career in a 12-0 beating of the New York Mets. He drove in 6 runs in the game, connecting twice off Robert Gsellman and once off Josh Edgin. He returned to the All-Star Game, but was not voted in as a starter - Zack Cozart got the nod - something which prompted teammate Kenley Jansen to blast Dodgers fans for not supporting the team's players enough. On July 19th, in only his third season in the majors, he hit his 44th homer as a shortstop to become the Dodgers' career leader at the position since their move to Los Angeles! Rafael Furcal held the previous mark. It helped that previous long-serving shortstops for the team, such as Maury Wills, Bill Russell or Dave Anderson, were not power hitters. He was sure to obliterate the mark by the time he was done, unless traded. He finished the season at .295 with 22 homers and 77 RBIs in 145 games. He went 3 for 11 with 2 RBIs as L.A. swept the Arizona Diamondbacks in the Division Series, but tweaked his back in the final game and was placed on the disabled list before the start of the NLCS. He returned in time for the World Series when he went 6 for 27 with a double and a homer in L.A.'s loss to the Houston Astros in seven games.

2018 was basically a lost season for Corey. He started off relatively slowly, hitting .267 with a pair of long balls and 13 RBIs in 26 games in March/April, then on April 30th, the team announced that he had been diagnosed with a sprained ligament in his right elbow. The injury necessitated Tommy John surgery, ending his season on the spot. While he was recovering from the operation, he had to undergo another surgery, this one on his left hip, performed in mid-August. He returned in 2019, playing 134 games and leading the National League with 44 doubles while hitting .272 with 19 homers, 82 runs and 87 RBIs. However, he was stifled in the postseason, going just 3 for 20 with 1 double as the Dodgers were upset by the Washington Nationals in the Division Series.

Corey had an excellent season in 2020, although this was somewhat obscured by the fact it was reduced to 60 games by the Coronavirus pandemic, preventing anyone from amassing big stats. He hit .307 in 52 games, with 12 doubles and 15 homers, scored 30 runs and drove in 41, putting up an OPS+ of 152, his best since his 27-game stint in 2015. He was 9th in the MVP voting and was at his best in the postseason, being named MVP of both the NLCS and the World Series. The Dodgers won their first title since 1988 when they defeated the Tampa Bay Rays in six games. He went 9 for 29 (.310) with 5 homers when they defeated the Atlanta Braves in seven games in the Championship Series, and 8 for 20 (.400) with 2 homers in the Fall Classic. Overall, in the four rounds of postseason play, he went 22 for 67 (.328) with 4 doubles, 8 homers, 20 runs and 20 RBIs in 18 games. In 2021, he was hitting .265 in 37 games with an OPS+ of 119 when on May 15th he broke his right hand when hit by a pitch thrown by Ross Detwiler of the Miami Marlins. The Dodgers had slowed down noticeably after a very hot start, reeling from a number injuries including one to OF Cody Bellinger, and Corey's likely lengthy absence was a big cause for concern for the defending champions. He only returned on July 30th but then played nearly every day the rest of the way as the Dodgers fell one game short of the San Francisco Giants in spite of recording 106 wins. In 95 games, Corey batted .306 with 16 homers and 57 RBIs and an OPS+ of 145. The Dodgers dd eventually acquire another shortstop following his injury, Trea Turner of the Washington Nationals, but that came the day after Seager's return and Turner ended up playing at second base for L.A. In the postseason, he went 0 for 3 with a walk in the Wild Card Game win over the St. Louis Cardinals, the 5 for 21 with a pair of doubles when the Dodgers took their revenge over the Giants by defeating them in the Division Series. In a replay of the previous season's Championship Series, the Dodgers then played the Braves in the NLCS; he went just 4 for 24, but with a double and two homers as Los Angeles lost in six games.

Seager became a free agent following the 2021 season, part of a talented free agent shortstop class that also included Carlos Correa, Javier Baez, Trevor Story and Marcus Semien. The Dodgers had Trea Turner to take over for him and did not pursue re-signing him with too much fervor. Instead, he signed with the Texas Rangers on November 29th, inking a mega-deal lasting 10 years and worth a total of $325 million. This came one day after the Rangers had signed Semien, which meant that they would field have a completely revamped infield in 2022, with Semien likely to play second base, Corey at short, and excellent defender Isiah Kiner-Falefa, the incumbent shortstop, sliding over to third base. The deal also reminded everyone of one made two decades earlier by the Rangers, when they had signed another shortstop, Alex Rodriguez, to a similar contrat, which was then the largest ever granted to a player. Industry norms had caught up with the figures since then, so the total amount, while large, was far from a record, but contracts of such length had become a rarity.

Another brother, Justin Seager, was selected in the 2013 amateur draft. Corey and Kyle had never played on the same field together until spring training in 2018, when Kyle's Seattle Mariners visited the Dodgers in the Cactus League. The first time they met in a regular season game was on August 17, 2020 and fittingly both brothers homered in the game as L.A. won, 11-9, over the Mariners.