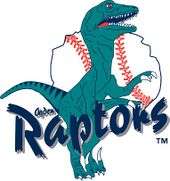 The Ogden Raptors began play in the Pioneer League in 1994 when the Pocatello Posse relocated to Utah. Originally an independent club, they have been a Los Angeles Dodgers affiliate since 2003. The Raptors play their home games at Lindquist Field, which opened in 1997, and is located at the base of the famous mountain that has been used as the symbol of Paramount Pictures. Lindquist Field was winner of the http://www.digitalballparks.com Ballpark of the Year Award in 2007. Previously, they played at Serge B. Simmons Field.

Originally an independent club, the Raptors did well under skipper Willie Ambos in their initial season of 1994, finishing second in the South Division, just three games behind the Helena Brewers. First baseman Jeremy Winget led the league with a .372 batting average and 74 RBIs. The next year, Ambos' club fell below .500. Offensively, the club was led by outfielder Jamie Lopiccolo, who hit 12 homers and led the league with a .388 average, and designated hitter Shane Jones, who paced the circuit with 69 RBIs while hitting .323.

In 1996, the Raptors began an affiliation with the Milwaukee Brewers. Skipper Bernie Moncallo took over at the helm, and the club reached the league finals, where they lost to Helena. DH Miguel Rodriguez was an All-Star and tied for the league lead with 17 home runs. Moncallo's club did not make the postseason the following year, despite fine performances by catcher Bobby Darula, who hit .332, and pitcher Derek Lee, who posted a 3.89 ERA in 14 appearances.

Ed Sedar took over as the Raptors manager in 1998, and the club once again returned to the playoffs, getting swept by the Idaho Falls Braves in the first round. Frank Candela hit .311 and paced the circuit with 43 stolen bases, and closer Dan Mathews tied for the league lead with 16 saves. Under the leadership of Jon Pont and Sedar the next season, the club once again missed out on the playoffs, despite the performance of outfielder Cristian Guerrero, who hit .310 with 26 steals.

Sedar's team once again made the postseason in 2000, losing to the Idaho Falls Padres in the first round. Third baseman Daryl Clark hit .339 while clubbing 15 homers, and outfielder Dave Krynzel hit .359. Pitcher Justin Gordon went 5-5 and joined them as All-Stars. In 2001, the Raptors were led by third baseman Florian Villanueva, who hit .308, but the team slipped under .500. The next season, under new skipper Tim Blackwell, they returned to the playoffs, but fell to the Provo Angels. Outfielder Mario Mendez provided offensive spark for the club, stealing 20 bases.

The Raptors became a Los Angeles Dodgers affiliate in 2003, and Travis Barbary took over as the team's manager. Despite finishing below .500, the team finished second to Provo in both halves and made the playoffs, losing to Provo in the first round. Despite a nearly identical record the next season, Barbary's club missed the postseason. First baseman Cory Dunlap hit .351 with 7 home runs that year to make the circuit's All-Star squad, however.

Juan Bustabad became the Raptors skipper in 2005 as the team won the first half title before falling to the Orem Owlz in the postseason. First baseman David Sutherland hit .336 and third baseman Russ Mitchell clubbed 13 homers and drove in a league-high 54 RBI. On the mound, Brent Leach went 5-3 and led the circuit with a 2.43 ERA. Under new manager Lance Parrish, the club fell back below .500 in 2006. Third baseman Josh Bell paced the offense with a .308 batting average and 12 home runs, and pitcher Steve Johnson went 5-5 and notched a league leading 86 strikeouts.

In 2007, Jeff Carter became manager of the Raptors as the club posted their worst record since joining the Dodgers chain. One of the bright spots for the team was closer Jhonny Caraballo, who led the Pioneer League with 10 saves.