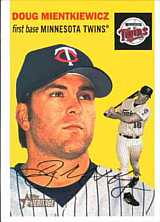 Doug Mientkiewicz played 12 years in the major leagues, winning one World Series ring and one Gold Glove. He won an Olympic gold medal for the United States in the 2000 Sydney Olympics. He was later involved in a controversy regarding possession of a baseball. Mientkiewicz was an unusual modern day first baseman in that he hit with little power (66 HR in 3,312 AB and a slugging percentage below league average for his career) but was instead noted for his ability to get on base and field well.

Mientkiewicz was a year ahead of Alex Rodriguez at Westminster Christian High School. Together, they helped lead the team to the #1 ranking in the nation in 1992, Doug's last year. Mientkiewicz was an All-State pick in both baseball and football; he also played basketball in high school.

In 1993, Mientkiewicz was a freshman starter on the #15 team in NCAA Division I, hitting .327 with 47 RBI to lead the team in both departments. The next year, he batted .344 with 74 runs, 22 doubles, 12 homers and 63 RBI; FSU was 7th in the nation and played in the 1994 College World Series and Mientkiewicz led them in almost every offensive department. His production numbers did not place him among the Atlantic Coast Conference top 10 in many areas, though, as he was well behind future big league contemporaries like Jason Varitek and Nomar Garciaparra. Mientkiewicz hit .207/.314/.414 for Team USA in the 1994 Baseball World Cup, part of the reason for their disappointing 8th-place finish. Overall that summer, he hit .277 and led Team USA in RBI (41) and homers (10). He tied Kevin Gibbs for the most runs scored (28).

Mientkiewicz kept on improving. He batted .371 in 1995 with 75 runs, 80 RBI, 20 doubles and 19 home runs, leading FSU in every department despite the addition of J.D. Drew. His 19 steals tied for third on the team. He was 9th in the ACC in average, third in homers and led in RBI. He again failed to crack the All-Conference team as Clemson's David Miller was picked instead at first base. He tied Mark Wulfert for 9th in NCAA Division I in RBI and tied four others, including Darin Erstad, for 12th in homers. He helped lead FSU to third in the nation. He made the All-Tournament Team for the 1995 College World Series and would later be named to the College World Series All-Decade team for the 1990s.

In his second year with New Britain, Doug was one of the best players in the EL, batting .323/.432/.508 with 96 runs, 45 doubles, 16 home runs, 88 RBI, 96 walks and 11 steals in 15 tries. He led Twins minor leaguers in doubles and walks and tied Eric Chavez, Dave Hajek and Brian Daubach for 5th in the affiliated minors in doubles, as well as a top 10 finish in walks. He led the EL in average, beating out Michael Barrett by 3 points, and also paced the loop in doubles and runs. He was two walks behind leader Calvin Pickering. He was second in the league in hits, trailing Darren Stumberger by 2 and was second to Pickering in OBP (by .002). He tied for third in RBI. Doug helped New Britain to its first EL finals since 1983, where they lost to the Harrisburg Senators. Pickering beat him out for the All-Star spot at 1B but Mientkiewicz was named at DH. Pickering also was named MVP. Baseball America rated him as the best defensive first baseman in the league.

A September call-up, Mientkiewicz started and hit 8th in his debut. In his first MLB at-bat, against Brian Moehler, he flew out to Juan Encarnacion. He later reached on an error, grounded out and drew a Todd Jones walk to complete his day. The next day, Mientkiewicz singled off Frank Castillo for his first hit in The Show. He finished the season 5 for 25 with 4 walks and a double for the 1998 Twins.

Mientkiewicz was part of a youth movement on the 1999 Twins and split first base duties with Ron Coomer; Doug struggled, hitting only .229/.324/.330 with 2 home runs and a 66 OPS+. His .997 fielding percentage led AL first basemen. He also criticized Tom Kelly's management, which did not win him support from on high.

Coomer became Minnesota's starter in 2000 while Mientkiewicz played in AAA for the first time. He batted .334/.406/.524 for the Salt Lake Buzz with 96 runs, 32 doubles, 18 home runs and 96 RBI. He led Twins minor leaguers in hits (162) and total bases (254). He ranked sixth in the Pacific Coast League in batting average and was second to Jose Ortiz in hits. He made the PCL All-Star team at DH. Baseball America rated him as the best defensive first baseman in the league. In his limited time in the majors with the Twins, he was 6 for 14 with 4 RBI.

Mientkiewicz was one of the top US hitters in the 2000 Olympics, hitting .414/.471/.655. He led the team in slugging, was second to Ernie Young in OBP, second to Pat Borders in average (leading the US's qualifiers) and tied Young for the team lead with 8 RBI. He hit a game-winning 8th-inning grand slam against Pil-jung Jin of the South Korean national team for all the offense in a 4-0 first-round win. In the semifinals, he did even better against the Koreans. With a 2-2 tie in the bottom of the 9th, he went deep against Seok-jin Park to put the US into the Gold Medal game. He was 0 for 3 in the finals but scored one run against José Ibar as the US stunned Cuba 4-0 for its first Gold Medal. He ranked among the leaders in almost every department - he was second to Dave Nilsson in average; he tied Sharnol Adriana, Paul Gonzalez, Orestes Kindelan, Norihiro Nakamura, Yukio Tanaka and two others for 2nd in home runs (2), one behind Mike Neill; he tied Nakamura, Young and David Sheldon for second in RBI behind Kindelan.

Mientkiewicz replaced Coomer as the Twins starting first baseman in 2001 and went on to be named team MVP, leading the club in average (.306) and doubles (39) and placing second to Lawton with a .387 OBP. His 122 OPS+ was a career high, as were his 15 home runs and .464 slugging percentage. He tied Garret Anderson for 8th in the 2001 AL in doubles and won a Gold Glove Award at first base after fielding .996.

Mientkiewicz hit only .246/.340/.363 in 78 games for the 2004 Twins. He was part of a four-team trade which send him to the Boston Red Sox; Minnesota got Justin Jones from the Chicago Cubs as part of the deal, whose most notable player was Nomar Garciaparra.

Mientkiewicz hit only .215/.286/.318 for the 2004 Red Sox but was 4 for 9 with a double in the postseason. He recorded the final putout of the 2004 World Series, catching a throw from Keith Foulke on a grounder from Edgar Renteria after entering as a defensive substitute for David Ortiz. Mientkiewicz claimed ownership of the actual baseball to the horror of "Red Sox Nation". He claimed that this baseball would help fund the education of his children. Eventually, he agreed to "loan" the ball to the Red Sox. Seeing as how he had already earned over $5 million as a baseball player, his claims would appear silly.

Mientkiewicz had now won a World Series title, Olympic Gold Medal and high school national title, perhaps the only player to complete that trifecta. He had also played in the College World Series, almost giving him yet a 4th type of title.

After the 2004 season, Mientkiewicz was traded to the New York Mets for Ian Bladergroen. He hit .240/.322/.407 with 11 home runs and 36 runs scored while playing about half the season; no other New York first baseman came close in playing time. A free agent after the season, Doug signed with the Kansas City Royals and produced at a .283/.359/.411 clip for a 99 OPS+ despite just four home runs in 91 games for the 2006 Royals.

Again let go, Mientkiewicz was signed by the New York Yankees. He batted .277/.349/.440 for the 2007 Yankees as their primary first baseman but only had 192 plate appearances due to the slew of options they tried there. His 106 OPS+ was his highest since 2003. He missed significant time after a June collision with Mike Lowell broke his right wrist.

Dubbed "The Mink" by Ivan Felt and Harris Conklin, authors of the book Believeniks!.

In 2012, Mientkiewicz was named hitting coach of the Ogden Raptors. He became a manager with the Fort Myers Miracle in 2013-2014. In 2015, he moved up to the Chattanooga Lookouts for a pair of seasons, taking the helm back at Fort Myers in 2017. In 2018, he became the manager of the Toledo Mud Hens, the longtime Triple A affiliate of the Detroit Tigers.