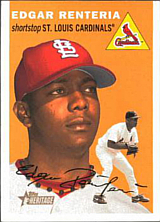 Shortstop Edgar Renteria is the brother of former minor league infielder Edinson Renteria and Everth Renteria. He had a flair for postseason dramatics, driving in the game-winning run in Game 7 of the 1997 World Series to give the Florida Marlins their first World Series triumph in just their fifth season of existence. In 2010, his game-winning home runs in Games 2 and 5 of the Fall Classic led to him winning World Series MVP honors.

Even though Renteria played his last major league game with the Cincinnati Reds in 2011, he did not formally announce his retirement until the spring of 2013.