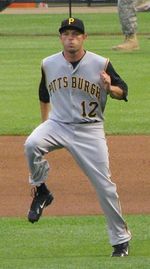 Freddy Sanchez overcame serious health issues as a child, where it was expected he would never be able to walk, to become a baseball star. He would go on to win a batting title, make 3 All-Star teams and be on a World Series-winning club. Sanchez hit .297 in 10 major league seasons and once reached the 200-hit and 50-double levels. He helped out others with disabilities, helping in the creation of a Miracle League field in the Pittsburgh area.

Sanchez was born with a club right foot and a severely pigeon-toed left foot. The initial medical opinion was that he might never be able to walk. After surgery at 13 months of age and years of therapy, he not only was able to walk, but run fast enough to play baseball professionally. During his childhood, he had to use casts, walkers and special shoes. [1]

He was drafted in the 30th round of the 1996 amateur draft by the Atlanta Braves but did not sign. Going to college in the NAIA, He helped Dallas Baptist make the 1999 NAIA World Series and was named the All-Tournament shortstop. [2] Freddy hit .434 with 13 homers as a senior for Oklahoma City University, making the Baseball America All-America NAIA team at shortstop. [3] The Boston Red Sox selected him in the 11th round of the 2000 amateur draft and he was signed by scout Ernie Jacobs for a $1,000 bonus. [4] Debuting with the Lowell Spinners, Sanchez hit .288/.347/.439 in 34 games and then batted .303/.372/.367 in 30 games after a promotion to the Augusta GreenJackets.

Freddy moved up to the Sarasota Red Sox and Trenton Thunder in 2001, putting up lines of .339/.388/.446 for the former and .326/.363/.471 at the AA stop. He hit 39 doubles that year and would have been first in the Florida State League and second in the Eastern League in batting average had he been among the qualifiers. Baseball America listed him as the 17th-best prospect in the FSL. He led Red Sox farmhands in doubles, hits and average. [5]

Rated as the 6th-best Boston prospect by BA entering 2002, Sanchez continued to top .300 that year - .328/.403/.437 for Trenton (with 19 steals in 22 tries) and .301/.350/.432 with the Pawtucket Red Sox. He led Red Sox minor leaguers in runs (85, one ahead of Kevin Youkilis), hits (1457), total bases (15) and steals (24). He was second in average to Hanley Ramirez and second in doubles, two behind Kelly Shoppach. He was rated the #10 EL prospect by Baseball America (between Erik Bedard and Jimmy Journell) [6] At age 24, he was just a step away from the major leagues, but Boston's shortstop slot was held down by Nomar Garciaparra. He was a September call-up to the Red Sox. In his MLB debut, he batted for another Sanchez, Rey Sanchez, in the 7th inning with a 8-1 lead over the Devil Rays. He singled off Steven Kent to score Cliff Floyd and Benny Agbayani. He stayed in at 2B then moved to SS when Lou Merloni entered the game and Garciaparra left. He was retired by Travis Phelps in his other at-bat that day. He hit .188/.278/.188 in 16 late-season at-bats. That year, he also married his high school sweetheart, Alissa. [7]

In 2002-2003, Sanchez hit .308/?/.444 for the Navojoa Mayos and was rated the #5 prospect in the Mexican Pacific League by Baseball America. [8] In 2003, Sanchez hit .235/.235/.294 in 34 AB for Boston and .341/.430/.493 for Pawtucket. Hitting .323 in the minors to that point, Freddy was dealt to the Pittsburgh Pirates as the key player in a trade with Mike Gonzalez and cash for Brandon Lyon, Anastacio Martinez and Jeff Suppan. The interesting thing is that Lyon, Martinez and Gonzalez had just been dealt between the same teams nine days prior - when the Bucs found that Lyon was damaged goods, the new deal was arranged, in effect being a deal of Sanchez for Sauerbeck and Suppan. [9] Freddy went 2 for 5 for the Nashville Sounds, then suffered severe tendonitis in his right ankle. Having surgery, his career was derailed for a couple of years. [10] He was ranked the #5 prospect in the International League (between Chase Utley and Adam LaRoche) and the 7th-best prospect among all shortstops (between Sergio Santos and Jason Bartlett) by Baseball America. [11]

The 2004 season had Sanchez play just 44 games for Nashville (.264/.326/.360) and nine for Pittsburgh (.158/.158/.158) at less than top form while recovering from the tendonitis. He hit .364 for the Peoria Saguaros of the Arizona Fall League, finishing 5th in the AFL in average and OBP (.444) and third in runs. [12] In 2005, Freddy finally was in the majors to stay. When Ty Wigginton was a bust at third base and 2B Jose Castillo was injured, Sanchez saw at least 58 games at both spots. He hit .291/.336/.400 for the second-best average on the club (.015 behind Jason Bay) and got better as the year progressed and he returned to health. On July 3, he had his first career homer in MLB, taking Doug Davis deep. He then went quite on the home run front until drilling four in a week in September. He also became a father as he and his wife had their first child, Evan. [13]

Despite fine defense, hustle, a strong finish and respectable 92 OPS+ overall, only one person in the Pirates management spoke up for Sanchez as the starting third sacker for the 2006 Pirates. [14] Instead, the club (showing the fine sense that had led to 13 consecutive losing seasons) threw money at free agents Bill Mueller and then Joe Randa. Pirates fans and the Pittsburgh media noted that Sanchez was about as good as Randa, younger and a good deal cheaper. Instead, Randa was made the starting third baseman. Sanchez was given a chance when Joe got hurt and was hitting .341 after 44 games, the top mark of any National League third base regular. For his fine work at third, he was nicknamed "The Rake" by Jason Bay. [15] Despite this and recognition by even Randa that Sanchez should start, Pirates manager Jim Tracy and general manager Dave Littlefield said Randa would start when healthy and Sanchez would become a utility man. [16] When Sanchez took over the NL batting lead, Tracy and Littlefield finally conceded to give Sanchez regular time when Randa returned.

He became the first Pirate to lead the league in average at the All-Star break since Al Oliver in 1976 and made the All-Star team. He entered the game in the 5th with the NL ahead 2-1, replacing Edgar Renteria at SS and Brandon Webb in the lineup in a double switch. He grounded out against Scott Kazmir in the 6th and Mariano Rivera in the 9th in a 3-2 loss. In September, he became the only player other than Paul Waner to reach 50 doubles in the entire history of the Pirates. [17] He became the 11th Pirate to win a batting title and gave the club its 23rd all-time batting crown, extending the major league record, but no Pirate had done it since Bill Madlock in 1983. [18] He had led the 2006 NL in average by .005 over Miguel Cabrera, was third in hits (200, trailing Juan Pierre and Utley), led in doubles (53, one ahead of Luis Gonzalez), tied Bay and Andruw Jones for second in sacrifice flies (9) and was the 7th-hardest batter to fan (between Omar Vizquel and Kenny Lofton. He did not win the Silver Slugger Award, which went to Cabrera at 3B.

With second baseman Castillo having struggled defensively in 2006 and being criticized by SS Jack Wilson, Castillo began spring training of 2007 at third base with Sanchez at second. [19] Unfortunately, Sanchez sprained his right knee when Rod Barajas took him out on a play there, raising questions about whether it was worth the risk. [20] Freddy missed the next couple weeks of spring training and started the season on the Disabled List. For the season, Freddy hit .304/.343/.442 while winning out the job at 2B (Jose Bautista wound up at 3B, with Castillo out of the starting lineup). In the 2007 All-Star Game, Freddy backed up David Wright at third base and flew out in his only at-bat, facing Jonathan Papelbon. The last Pirate infielder to make consecutive All-Star Games was Phil Garner 26 years prior. [21] He finished tied for 7th in the 2007 NL in sacrifice flies, led Pittsburgh in average, led NL second basemen with 121 double plays (8 ahead of Brandon Phillips), was third in assists there and fifth in putouts. He had surgery on his shoulder at year's end.

Sanchez struggled in 2008, hitting .271/.298/.371 for a 79 OPS+ while playing good defense at second base. Despite being fifth in the 2008 NL in games at 2B, he led with 104 double plays (two more than Utley, who played 28 more games). His .989 fielding percentage was second to Phillips. He started 2009 strong, with a .320 average and a NL-high 16 doubles after 41 games. On May 25, he went 6 for 6 with a double, homer, 4 runs and 3 RBI to become the first Pirate since Wally Backman in 1990 to have a six-hit game. [22] He made the NL roster for the 2009 All-Star Game but did not appear in the game. After 86 games, he was batting .296/.334/.442 and was down to 5th with 28 doubles. He was then traded to the San Francisco Giants for pitching prospect Tim Alderson as part of a rebuilding program. He was traded the same day as Jack Wilson, his longtime double play mate and friend. Pittsburgh had recently offered both of them extensions but had been turned down by their agents. [23] Also that year, the Sanchezes gave $50,000 for a Miracle League in the Pittsburgh suburbs to allow disabled children to play baseball. [24]

A Championship with the Giants[edit]

Sanchez suffered a separated shoulder diving for a grounder by Phillips on June 10, 2011. [27] He was batting .289/.332/.397 with 3 homers and 24 RBI at the time. He did not return that season following surgery. In 2012, he was assigned to the San Jose Giants on a rehab stint and went 4-for-10 with 3 RBI in three games and was looking to fill in for the injured Pablo Sandoval at 3B in the majors, but he then had a back injury that necessitated more surgery. [28] He would never make it back into a professional game. [29]